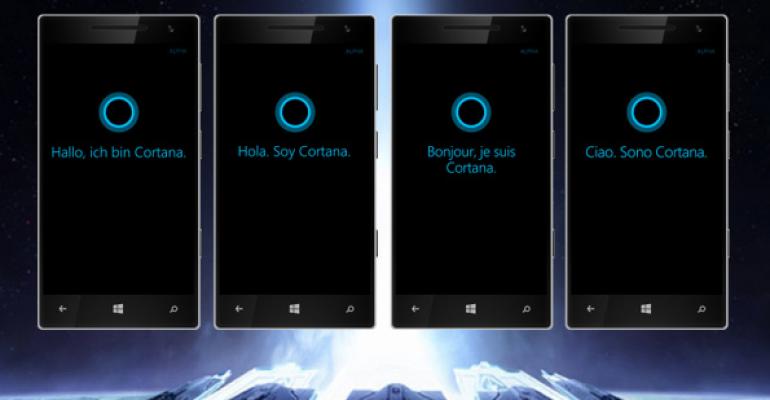 Still just an alpha release though

Microsoft announced today that Cortana, the key feature of Windows Phone 8.1, is now available in preview form to users in France, Germany, Italy and Spain. This update follows the original US-based release in the spring and subsequent preview releases in China and the United Kingdom.

Microsoft first made a beta version of Cortana digital assistant available as part of Windows Phone 8.1 in the United States only: That release was finalized in April 2014, but didn't really ship to users until much later in the year (and, depending on your wireless carrier—cough, Verizon—not at all in some cases, yet). It added beta Cortana support for China and the UK in the Update 1 release in July, and to Canada, India, and Australia in "alpha" form.

So this week's release to the biggest smart phone markets in Western Europe is of course a big deal, and not just because of their overall size, but because these are also coincidentally markets in which Windows Phone performs quite well.

That said, this initial preview release is also just an "alpha," meaning that while most of the Cortana features seen elsewhere are available, some are missing or will be coming soon. Microsoft notes that flight tracking is not available at this time in the alpha release, that transit data is currently limited to larger cities (though it will expand), and that some reference data ("How tall is Mt. Everest") is not available, but will be coming soon.

Microsoft also notes that it has tailored Cortana’s personality for each language. So you will get locally-relevant chit chat, jokes, and data. "Cortana will also show European football (or as we Americans call 'soccer') league data, including Bundesliga, Serie A, Ligue 1, and La Liga," the firm notes in a blog post.

The big question, of course, is how users in France, Germany, Italy and Spain will even get Cortana. Microsoft says that it will be available first through the Windows Phone Developer Preview Program, so if you live in one of those countries, check out my guide Get Windows Phone 8.1 Update 1 Now for more information. Eventually, Cortana will be made available as a beta in France, Italy, Germany, and Spain just like in the U.S., China, and U.K., meaning that it will be made available to any users who have Windows Phone 8.1, not just those on the Developer Preview Program.