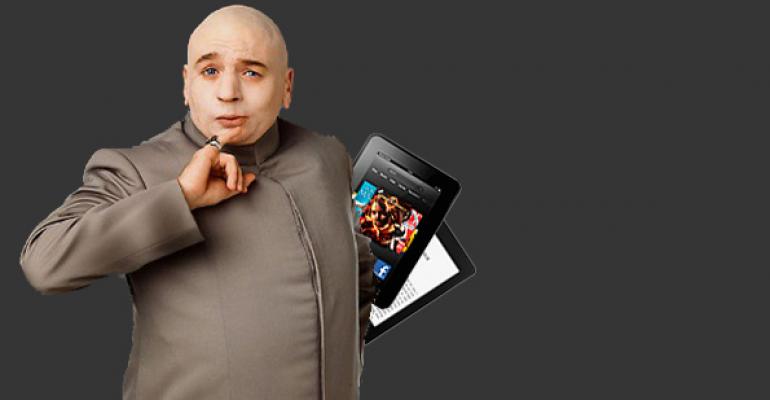 Amazon Issues No Facts at All About Kindle Device Sales

Help me out here, Amazon: You've sold how many million Kindles exactly?

I’ve complained in the past about how Microsoft’s newfound love of secrecy is harming its relationship with customers. (See Windows Phone Team: This is No Way to Treat Early Adopters for an obvious example.) This “strategy”—lack of transparency—is rarely the right move because it leads to distrust. Only Apple, with its crazy and cult-like following, is able to pull it off with no repercussions.

Well, Amazon does the same thing. And while I am a huge Amazon customer—via Amazon Prime, the Kindle devices/tablets and services, Amazon MP3 and Cloud Player Premium, Appstore for Android, and the never-ending caravan of UPS trucks delivering Amazon boxes to my home—and thus a fan of sorts I have always found the company’s announcements about Kindle sales to be frustrating. Why? Because they’re completely bogus and unverifiable.

You see, Amazon has never once provided a hard, cold number to Kindle device sales. Today, for example, the company announced that Kindle sales “more than doubled” last year’s record-selling holiday shopping weekend milestone. It then went on to provide a lot of other non-numbers, like “Black Friday and Cyber Monday were the best ever for the Kindle family,” and “the popular new Kindle e-readers and tablets remain at the top of Amazon’s best sellers list worldwide.”

Since I possess basic web browsing skills, I looked up what Amazon said about Kindle device sales last year.

Stretching my web browsing skills to their limits, I looked up the previous year’s announcement.

Well, I tried to. Amazon didn’t issue a Black Friday sales announcement in 2010. It did, however, note in late December that the third-generation Kindle (remember, Amazon didn’t launch its Kindle Fire tablets until 2011) was then “the bestselling product of all time on Amazon worldwide.” And, no. There were no Kindle numbers in that release either. There never are.

I don’t like it. And I won’t be writing news stories about these non-facts going forward. Someone needs to call BS on this.