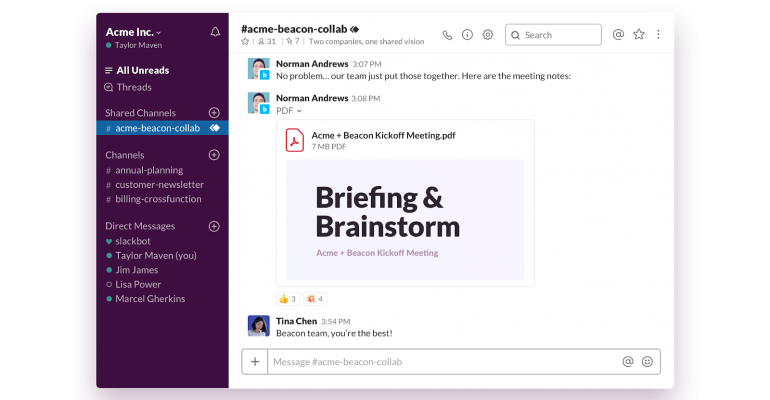 Slack unveiled features meant to ease workstream collaboration between email partisans and Slack users -- both in the same organization and in separate organizations. It's also automating task-based communications.

As Slack embarks on its two-day Slack Frontiers event, the company is building a case that its marquee product is more than a chatroom. There are three new features Slack is adding to its enterprise offering that are meant to help the company's platform further integrate itself into every workplace tasks for a full workstream collaboration experience.

The company recently released Outlook email add-ins, enabling users to be messaged within Slack the minute they get a meeting invitation in Outlook, respond to meeting invitations with one click and be notified of any potential scheduling conflicts.

Now, it's adding a way to move users seamlessly from email to Slack. As the company explains in a blog post:

Let’s say you’ve just invited a new hire to Slack, but they haven’t had a chance to join yet. When they’re mentioned by username in channels or sent a direct message, Slack will route those messages into their email inbox so they don’t miss out on important information while they’re getting themselves set up. If the invited member decides to join Slack, they will have the full history of the direct messages and channel mentions that were sent to their email.

This feature will be rolling out gradually. Some users may already have it. The company says it's also working to roll out a feature that allows people to reply right from their email inbox, with their response posting back to Slack.

Slack's workstream collaboration is no longer limited to one site. As of this summer, Enterprise Grid customers will be able to share one channel in a workspace between two different entities, like a consulting firm and a client, or a service provider and a customer. This shared workspace allows for on-demand chatting and sharing files.

Anyone who's ever used If This Then That, a cloud-based scripting site that helps connect different devices and cloud-based services via a simple trigger-action-result formula, will find Slack's new Workflow Builder feature familiar. Slack says the Workflow Builder will allow users to automate a series of if-then triggers and "include steps like forms to gather information and automatic posting into channels or direct messages of your choosing."

For example, channel owners could set up a workflow triggered by a new user joining the channel: If the user joins, then they get a welcome message full of hyperlinks to useful resources.

Slack says it will be rolling the feature out later this year. If you’re interested in a preview, sign up here to be added to the waitlist for the pilot program.

How Do These Features Compare to What Teams Is Doing?

Slack's embrace of enterprise-friendly features shows how the workstream collaboration tool is trying to reach feature parity with Microsoft Teams. There's no clear metric allowing either side to claim unequivocal dominance in the collaboration space -- Microsoft says Teams has half a million organizational users with 150 organizations boasting 10,000 or more users, while Slack measures its customer base by saying it has 10 million daily active users. Microsoft claims Teams is used by 91 of the Fortune 100 enterprises; Slack says it is embedded in 65 of the Fortune 100.

But Microsoft does enjoy a few enterprise advantages Slack has not had -- Skype for Business is being folded into Teams, thus moving an already-established customer base to Teams, and Teams benefits from ongoing efforts to embed Office apps into the user experience.

Microsoft rolled out a feature that allows two organizations to set up a shared channel between them last year. It also set up Teams with the same type of email participation Slack is rolling out. As Microsoft's documentation notes, "When you create a team in Microsoft Teams, you get a corresponding Office 365 group, which includes a group inbox and calendar in Outlook, a SharePoint site, and OneNote. The Outlook group provides an email address people from outside the team can use to send email to the entire team. However, you can't post messages or view channel conversations from Outlook."

As the collaborative workspace market begins to mature, its product managers have accepted that email is not going to go away quietly. There are some contexts where beginning or maintaining a chain of communication in email makes sense. So rather than beat email, these companies are bringing it into the collaboration space. Microsoft's done it, Slack's doing it, and so is Google. At Google Next two weeks ago, the company announced that for its GSuite customers, it is bringing Hangouts Chat into Gmail. Now the lower left section of Gmail will highlight people, rooms, and bots, and chatrooms open up into full-screen experiences with threads. This will allow people to collaborate in whatever communications mode works for the context.

Context may be key for how widely a collaborative space is adopted by teams; email-based teams may come into the real-time flow of a chat-based space reluctantly, or teams may develop time-sensitive practices that dictate when to switch between chat channels and email. Slack's newest features show that the company wants to make sure Slack can be the go-to workspace across different contexts.