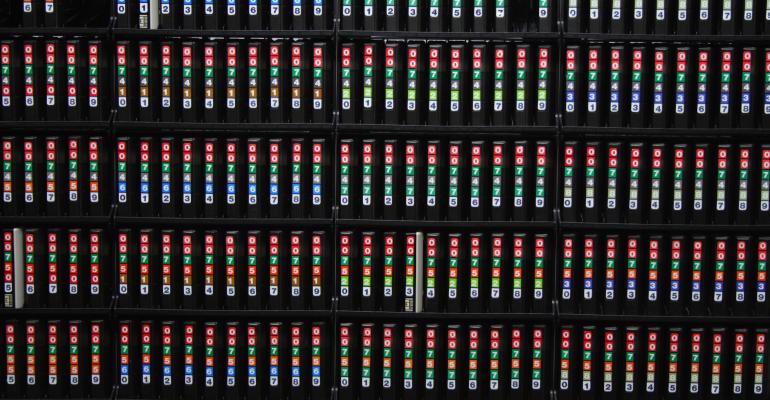 Bottomless cloud storage at cents per gigabyte for your cold tier might sound like the end of tape, but there’s more to consider than cost.

For an old relatively hard to manage technology, tape storage continues to be remarkably popular. For one, tape’s capacity and performance keep improving. Capacity of tape media shipped in 2017 was up almost 13 percent from the previous year, according to the Tape Storage Council, and even modern cloud companies like Dropbox continue using tape as a storage tier.

But last week at its re:Invent conference in Las Vegas, Amazon Web Services rolled out a cloud storage service it claimed would finally make tape storage obsolete. “You have to be out of your mind to manage your own tape going forward,” AWS CEO Andy Jassy said from stage, announcing the new Glacier Deep Archive service.

So, will its ultra-low price change the game for tape? One dollar per terabyte per month (that’s what Jassy said Amazon would charge for Glacier) equals to less than one cent per gigabyte. LTO tape also costs less than a cent per gigabyte, but that’s just the raw cost of storage and nothing else. The true cost of ownership of course also includes operational costs, which is where AWS wins on price over an on-premises tape archive.

On the other hand, you have to consider the cost of changing up your IT organization’s entire backup strategy. That can be a heavy lift, Steve McDowell, senior storage analyst at Moor Insights & Strategy, told Data Center Knowledge in an interview. “That migration comes with a cost that will need to be offset by the benefits of moving to Glacier DA,” he said.

The price of Glacier Deep Archive also doesn’t include the bandwidth cost of moving data to the cloud, McDowell noted. And that’s not a one-time cost, as data will likely continue being created in your data center rather than in the cloud. “Bandwidth costs can become a surprising issue; transfer times can be another,” he said.

Another big question is control. “Am I willing to lock all my data away in a vault that somebody else owns?” Once you’ve moved a petabyte of archived data into an Amazon data center, moving it out – if you want to switch vendors for example – will take a very long time and cost a lot of money. “That’s not a problem you have with tape,” McDowell said.

The value of Deep Archive lies not only in its price, but also in its performance relative to tape. You can get data out of Deep Archive hours sooner than out of a tape vault, Patrick Moor, Moor Insights president, told us.

That performance also means its use cases don’t have to be limited to archival storage. “GDA is definitely targeting archive, but some customers could use it for backup, as the time to availability could be as low as an hour,” Moor said.

Data protection software vendors like Veeam, Veritas, and Commvault already support Glacier, and the service includes the ability to run queries on archive data, he noted. “GDA can actually interact with a program as long as there is an installed file system. Customers can access specific files like they would a normal file system – after they are ’brought back to life.’”

Glacier Deep Archive’s competition with tape may lie more in the perception of tape than in its practical value. At re:Invent Jassy emphasised the complexity of managing tape, while tape system vendors claim that all those problems are a thing of the past. Managed tape offerings, like those sold by Iron Mountain, for example, make tape storage simple, fast, and reliable, while also supporting new workloads like object storage backup with the new Linear Tape File System.

The disconnected nature of tape is inconvenient in some ways, but it can turn into an advantage if you view it as “air-gapped” storage. “GDA data is susceptible to the same risks as live data,” Moor cautioned. (Although governance can be managed through AWS Control Center to avoid accidental or malicious deletion and protect from ransomware attacks.) “Tape is still good in a lock-and-key instance, when you absolutely want as few people to have access as possible.”

In some locations, regulations like data residency requirements or lack of bandwidth might rule out GDA. But AWS will be expanding the service to more locations eventually.

Today, it is perhaps the best fit for backing up new workloads, especially those that incorporate cloud services, rather than for replacing existing backup processes, McDowell suggested. “It’s an architecture that makes a lot of sense, and many IT groups will move over quickly, especially those already heavily investing in cloud,” he said. “We will also see IT organizations likely doing more backups because of the ease of use of the Amazon services, places where implementing tape solutions didn’t happen for whatever reason.”

Amazon is clearly pushing to be the default location for cloud-based data protection, but “I don’t think tape is going to die anytime soon,” McDowell said. “Tape has a heavy legacy. It’s more than about redirecting your backup software to deposit data on the cloud. Tape services decades-old workflows, workflows which aren’t really broken. Is there a significant enough operational or economic benefit to IT groups to migrate? Am I willing to commit to Amazon for the very long term? Those are the real question. For some, it will be an easy transition; for others, they’ll stick with tape.”