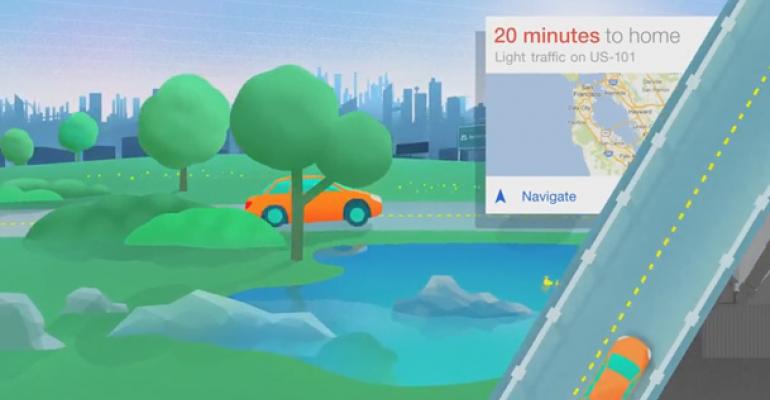 Sleeping with the Enemy: Google Now for iPhone, iPad

I think of Google Now as a combination of the type of integrated experiences Microsoft uses in Windows Phone with Google’s vaunted search technologies. If this evolves as expected, it could become a sort of voice-guided digital assistant for your entire life, an uber-OS of sorts that sits at the heart of all computerized interactions. Yes, it has a ways to go, but it’s the real deal, whereas Apple’s Siri is really just a marketing success that doesn’t work well in real life.

I previously praised Google Now in Bad News, Windows Phone Fans: Google Now is the Real Deal. The news today is that Google is expanding Now beyond Android, to iOS. It’s available as an update to the Google Search app for iPhone, iPad, and iPod touch.

“Google Now is about giving you just the right information at just the right time,” Google engineer Andrea Huey writes in a post to the Official Google Blog. “It can show you the day’s weather as you get dressed in the morning, or alert you that there’s heavy traffic … It can also share news updates on a story you’ve been following, remind you to leave for the airport so you can make your flight and much more. There’s no digging required: cards appear at the moment you need them most—and the more you use Google Now, the more you get out of it.”

That last bit is perhaps the most confusing aspect of Google Now for new users. When you first access the interface, it doesn’t appear to do much. But over time, as it kicks in, Google Now can be almost amazingly prescient, alerting you to a late train or whatever. (Privacy purists will also note that Google Now is amazingly creepy in the way that only Google services are, as if maybe it knows a bit too much about you.)

Anyway, check out this short intro video explaining how Google Now works on iOS if it’s still not clear.