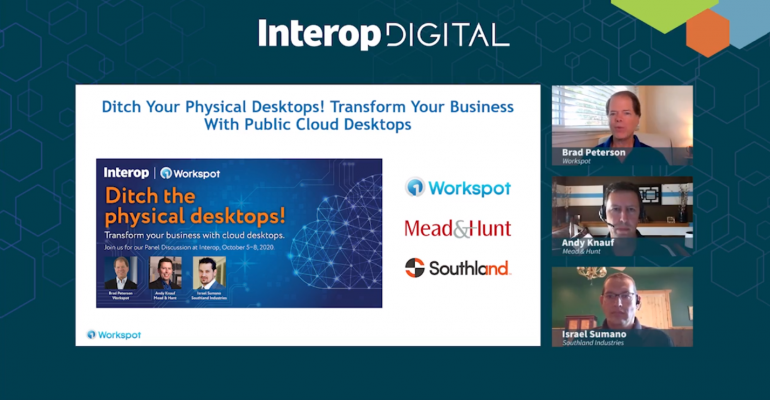 Interop
A panel discussion on virtual desktops in the cloud during Interop Digital 2020.
Cloud Computing and Edge Computing

The usage of cloud-based virtual desktops will help remote employees work from anywhere, collaborate with their co-workers, and protect company data in one fell swoop.

Editor’s Note: Interop Digital 2020 took place from October 5-8, 2020 and we’re highlighting some of the panels and keynotes of interest to IT professionals. Check out the recap below,  and if you like what you see, you can register to view this session – and more than 50 others – on demand here.

During the Cloud Environments track at the most recent Interop Digital 2020, IT professionals avowed that public cloud-based virtual desktops can replace physical desktops in any organization.

The panel, “Ditch Your Physical Desktops! Transform Your Business With Public Cloud Desktops,” was comprised of three IT pros who have already lived through moving their companies to hosted desktops: Brad Peterson of hosted desktop company Workspot was on the panel with people from two of the companies that are Workspot customers, Andy Knauf of Mead & Hunt, and Israel Sumano of Southland Industries.

These companies aren’t necessarily app start-ups staffed by kids who grew up in the cloud: Mead & Hunt is a 120-year-old engineering and architecture firm, and Southland Industries was founded in 1949 and is a systems expert focused on building performance and lifecycles. Both of these firms rely on computer-aided design tools (CAD) that require intensive computing resources, and finding a cloud-based virtual desktop solution that could keep up with the computing workloads for the CAD tools and not lag on performance was important.

The three panelists identified the key elements of the decision-making process leading to cloud-based virtual desktops, the technical challenges they encountered during the migration, and the benefits the shift has provided their companies.

Both Mead & Hunt and Southland Industries tried Virtual Desktop Infrastructure (VDI) before the pandemic hit but ultimately landed on cloud based virtual desktops provided by Workspot for their long-term solutions. Both organizations stated that the slow speeds of VDI, its high overhead for hardware, and the cost of that hardware made it a poor choice for full implementation compared to their current experience with cloud-based virtual desktops.

The first benefit that both Knauf and Sumano noted was increases in productivity once offices had to be shut down due to the pandemic. The normal mode of operation for many of their engineers was accessing virtual desktops directly on the worksite and then returning to the office once that remote work was completed. The only change they encountered once each company sent everyone home due to the pandemic was that employees were no longer coming into the office anymore. That turned commute time into productive time on their work.

Because of the nature of the companies’ work, being able to access the resource heavy software they needed from any job site was already a foundational IT requirement. Having the engineers’ desktop environments in the cloud meant they had better access due to the location of supporting data centers. That impacted latency because employees were accessing the virtual desktops via the closes data center which helped increase performance even further.

In addition, all the company data accessed and used on these cloud-based virtual desktops remain in the cloud and within the company’s control. The panel participants had no concerns about that data being on an unsecure or personal device.

Virtual desktops also meant that high-end devices were no longer required for each engineer because they no longer needed to run resource-intensive software such as CAD. One of the companies, Southland Industries, even mentioned they are heavily invested in Surface Pro, Surface Laptop, and are even testing Surface Duos for their virtual desktop delivery. Low end devices are now more than capable of accessing and using virtual desktops from the cloud.

Overwhelmingly, both companies see the value of their pre-pandemic investment in virtual desktops not only for those in the field but individuals who are typically office-based like support staff and office managers. By already being on a virtual desktop infrastructure, there was no ramp-up period as employees had to shift to full remote work when the pandemic-related lockdowns occurred. No additional hardware had to be shipped out across the country to get employees back to full productivity.

Wrapping up, when asked what they would recommend to those who have not yet ventured into the cloud environment is to get started. Each of these companies are now fully in the cloud with their virtual desktop services, and although each said they hesitated when approaching this migration, they stated they have zero regrets about this migration to being in the cloud 100%.