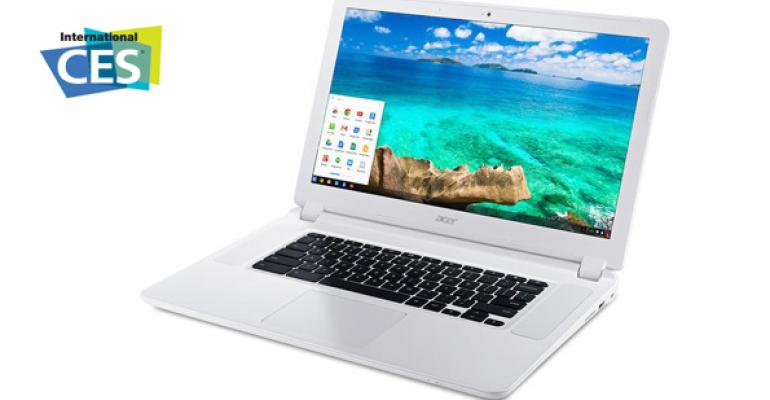 Bigger but not any smarter

At CES 2015 this week, Acer announced the world's first 15-inch Chromebook, the imaginatively named Chromebook 15. And while news of a slightly larger Chromebook isn't perhaps all that interesting, I'm curious to see whether Acer has improved the styling of the device compared to its existing Chromebooks.

I've had a rocky road with Chromebook, as you may know. I have two Chromebooks in house at the moment, though I only use one, the HP Chromebook 11, with any regularity. But what I've been looking for is a bigger and more comfortable device.

I ordered but am returning Acer's 13-inch Full HD Chromebook, and the reason may amuse you, as it is exactly the opposite of the problem I have with many modern Windows devices: At 13-inches, the Full HD (1920 x 1080) display makes Chrome OS onscreen elements hard to read and see. I'm curious whether this new 15-inch model, which will come in both 1366 x 768 and Full HD versions, will be easier on the eyes.

So the Chromebook 15 is ... interesting, if only in an "I need this for testing and comparison purposes" kind of way. It will start at just $250, though the Full HD version will no doubt cost $350. It appears to offer a form factor similar to that of the Chromebook 13, but with two obvious differences: The wideness of the body accommodates speakers to the left and right of the keyboard. And Acer is offering this device in something other than dirt-attracting white. (Though white is still available.)

The Chromebook 15 is no lightweight, however: It weighs in at 4.85 pounds, and is pretty thick at .95 inches. But I'd remind people this isn't aimed at road warriors, but will instead be used largely around home or in class. As such, it will always be near power, though Acer claims the device will get up to 8 hours of battery life.

From a performance perspective, the Acer Chromebook 15 can be had with an Intel Celeron processor that is based on the 5th Generation Core processor lineup, and a Core i3 model may be offered in the future as well. RAM is 2 GB—standard at this price point—or 4 GB and storage is 16 GB or 32 GB. It has one USB 3.0 port, one USB 2.0 port, an SD Card slot and HDMI out, plus 802.11ac wireless and Bluetooth.

Methinks it's time for an HP Stream 15.