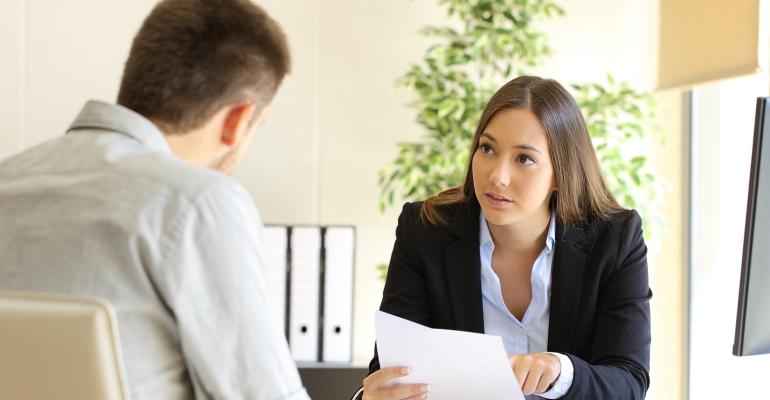 Video: Tips for a Successful IT Job Interview

Amid a slowing economy and changing hiring environment, IT professionals must find new approaches when applying and interviewing for new roles.

A forecasted economic downturn has done little to stymie the continued demand for IT professionals generated by the past year's rise in resignations and employee burnout.

Yet, as more IT workers put themselves on the market, applicants must take steps to distinguish themselves from their equally capable peers.

Related: AI, Data Science, and DevOps: Opportunities for IT Careers in 2023

In this video, Tom Brown, chief human resources officer at Druva, a software company with employees in Europe, Asia, and the United States, offers IT job seekers advice on applying for new positions in the new year.

Transcript follows below. Minor edits have been made for clarity.

ITPro Today: What's your best advice for IT job seekers?

Tom Brown: Increasingly people apply for roles through job postings, and with the specificity of those job postings, I think it’s important to really understand what two or three top elements are that the company is looking for -- whether those are skills or experiences or cultural style -- and make sure that those are emphasized in any kind of resume that is sent in.

Then, if you get through that initial sifting piece, which in and of itself can be hard, it's really about doing the research on the company. I'm still amazed at how many people will come in and talk to Druva, and indeed other companies I've been in, and they really haven't done the research.

There's so much material out there now on the organization, the products, the executive team, the culture, and the people who really are curious about the job and ask good questions as they start to interview really stand out from those who are expecting it to be more of a kind of a selling proposition.

Again, I think that's partly how the market has changed over the last six months. Companies still have to sell hard and should sell hard, but it's not a pure selling motion now.

Brown: For a lot of people, talking about compensation makes them feel incredibly uneasy, because they have that feeling of going, "If I ask for this, am I greedy or avaricious? But then I don't want to underplay myself, and I want to get the right role.”

So, the more you can understand about the role and the kind of expectations that the role should have from a compensation perspective is helpful. Often people have little or no idea, and the range will be so broad that it's unhelpful.

Almost every company will have a really clear view as to what a role will pay. Increasingly we're seeing states come in and say, "Actually, you need to be transparent as to what those ranges are for each role," and that's broadly a really good initiative. It does end up with some slightly weird situations. There was one -- I think it was the New York Times -- recently, where they just gave this huge range, like $60,000 to $250,000 or something for a job, which makes it really hard. But most jobs are more specific than the ones that they were looking for, and it's easier to come up with a range.

My one piece of advice for people as they think about this is: Be clear what you really want.

If you really care about the base salary piece, just make that clear. If you care about the total cash compensation, talk about that. If the opportunity that equity provides is really exciting to you, be clear. Because generally when a company comes in with an offer, there's an opportunity to come back and at least have a conversation about whether there might be some flexibility.

But don't go and say, "I want everything." Be really thoughtful and say, "Look, I value equity more than I value an increase in base. Can we do something else in equity?" Or: "What can we do on the base salary? It feels low from the benchmarkings I got." I think that's an opportunity.

From a gender pay perspective, the data suggests that women are sometimes less forceful in the way they negotiate at the beginning, which leads to women coming into organizations at lower salary levels, which causes some of the gender pay issues that need to get sorted out. So, I think those are all areas that we need to look at, and as a broad set of companies around the world, we need to help do better on the gender pay piece, too.

ITPro: How is the playing field different in 2023?

Brown: It's a great question, and I think the mood has very much changed over the last few months. Increasingly, we're seeing companies taking a pause in hiring. Some larger companies are making decisions to reduce the number of people in some of their loss-making organizations, and there are some smaller companies that are starting to have cash problems and worrying about investors.

So, I think that the piece that we had a year ago, where the talent market was very fluid, and almost everybody was out all the time, speculating as to where they could go and what they could get from a compensation perspective and career development perspective, and cultural alignment perspective -- that's slightly faded.

In fact, what we're starting to see more now is a risk aversion coming into people's calculations. If they're in a good role, people are starting to hunker down a little bit more. So, it's actually almost getting harder to find people these days than it was six months ago, even though you’d expect the opposite to be true, and that there'd be more talent in the market.

It's a very different kind of world that we're moving into. From a company perspective, it's really about asking: What is your unique selling proposition? What is the culture, the growth opportunities, the career development opportunities? It's going to be less a pure cash-driven, compensation-driven conversation.