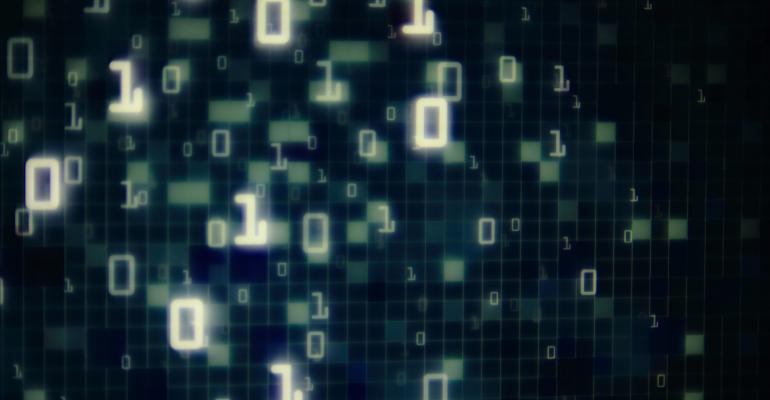 Maintaining at least one copy of live data is essential for organizations to ensure that an accidental or malicious loss of data won’t become a devastating event.

Data backup is the practice of using devices, systems and processes to copy digital data from its source to one or more discrete media repositories, usually referred to as backup targets. The purpose of backup is to ensure that at least one duplicate copy of data is available for restoration if any original data is lost or damaged.

Typically, only data files are backed up periodically. However, in some cases or at longer intervals, applications and operating system environments and components may also be copied during a backup.

Backup can protect data from malicious attacks such as viruses, ransomware and data theft, as well as from inadvertent deletions and other user-incurred errors. 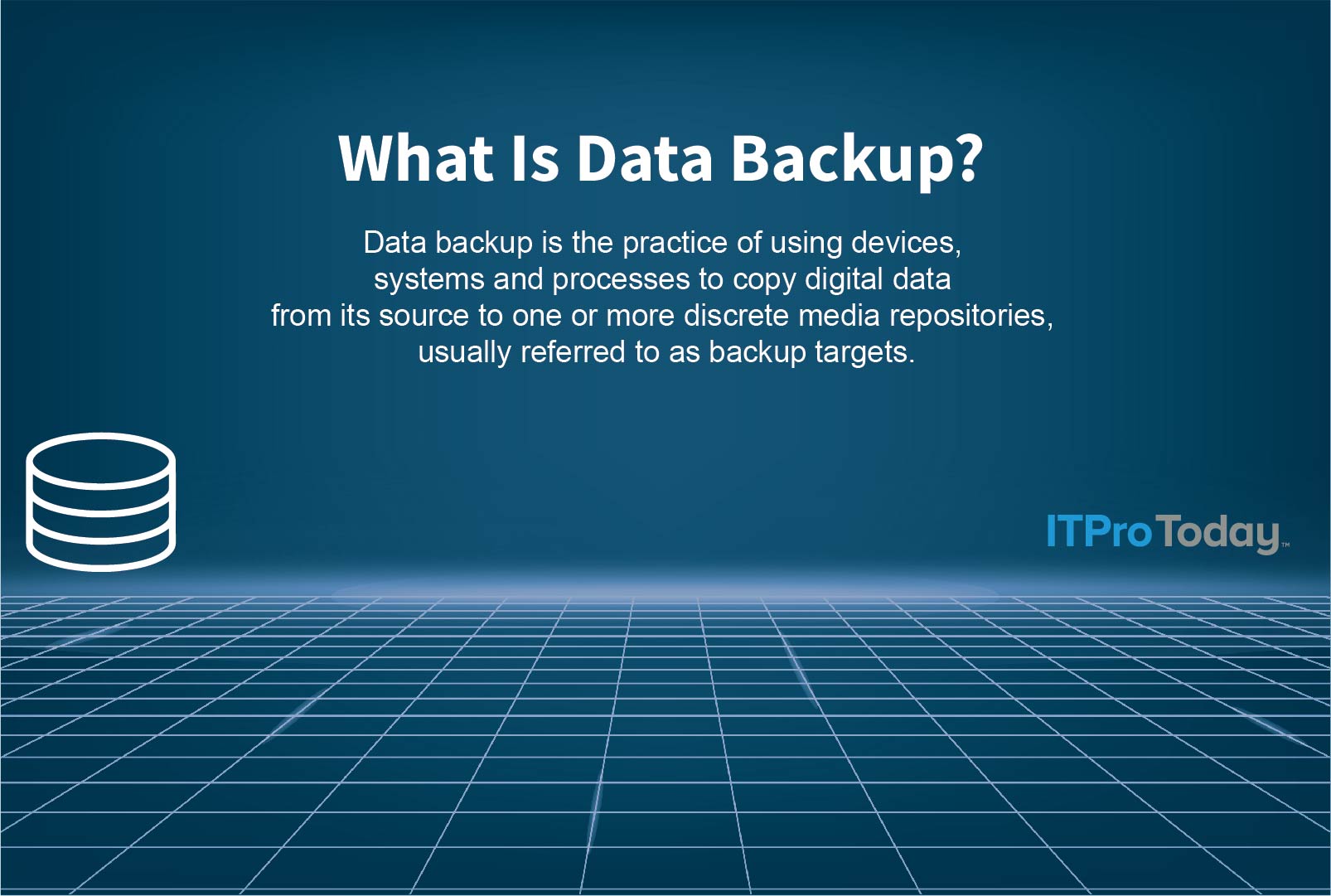 How Does Data Backup Work?

A backup application will make copies of data at preset intervals and send those copies to a separate target storage device. Most backup apps require that data is not actively accessed or manipulated during the backup process. In some cases, the backup software can temporarily halt a process that is accessing data so that the data can be copied.

Traditionally, backup activities occurred overnight during non-business hours when there was less likelihood that users or applications would access data. As organizations began to create and collect growing volumes of data, a backup operation would sometimes spill over its “window” and into the next workday. Today, many companies conduct business on an around-the-clock basis with no definable backup window available, so alternative backup methods must be employed.

Backup applications copy data to separate storage systems which may use a variety of media, including tape, hard disk drives, solid-state drives or cloud storage services. In the past, tape was the predominant backup target media. Tape offered a relatively inexpensive way to store data, media that is easy to remove and transport, and the easiest way to ship copied data to other locations for safekeeping. Today’s largest tape libraries can contain dozens of tape drives and thousands --even tens of thousands -- of slots to hold tapes, thus offering ready access to petabytes of data.

Despite the potentially huge capacities of tape systems, the use of tape for backup has diminished considerably in the past 20 or so years. As the price of hard disk technology dropped and hard drives grew more capacious, organizations shifted from tape to disk-to-disk backup. The main appeal of disk-to-disk -- or D2D --backup is that it’s far easier to recover data from a hard disk drive than from tape.

However, D2D created a new problem: moving backups offsite for safekeeping. Hard disks typically aren’t easily transported. That problem can be resolved rather simply by engaging a cloud storage service as a backup target. Using a cloud storage service, one copy of the backup remains on-premises for single file recoveries while another data set at the cloud service is available for more extensive recovery operations.

A variety of products collectively categorized as continuous data protection (CDP) applications can also address the issue of shrinking backup windows. Rather than wait for a time when data isn’t being accessed, CDP products effectively lurk in the background and back up data as it is created or modified. Some CDP products use agents installed in servers or clients to keep track of the changes to the data. Then, at relatively short intervals, the CDP apps will copy those changes to a master backup where the updates occur.

Data can similarly be backed up on an ongoing basis at the storage system itself using snapshot technologies. Snapshots periodically grab an image of the changes that have been made to the stored data. Those images reside on the same storage system as the original data, so they must then be replicated to another system on- or offsite. When a recovery is required, the images are used to reconstruct the data as it appeared when the most recent snapshot was taken.

A major benefit of backing up to a disk target is the ability to reduce the size of the data backup by using deduplication or compression. Dedupe and compression effectively “squeeze out” excess space in files by identifying and eliminating redundant data and then creating unique hashtags to maintain the integrity of the deduplicated data. Dedupe can drastically reduce the amount of physical storage needed to hold backup data. It’s important to note that when deduped data is retrieved, the backup software must reconstitute he deduped data before returning it to its original form.

Cloud backup can present an attractive alternative to hardware-based storage, as its pricing is based on a pay-as-you-go model where billing is linked to storage requirements. That means companies can be confident of having ample storage space available when needed without having to make any capital expenditures. However, one possible hitch related to cloud storage may be the link to the service itself: Costly communications lines might be needed to handle the volume of backup data that gets transmitted.

What Are The Benefits And Drawbacks of Data Backup?

Backups have been around since the beginning of computing -- and for good reason. Having a verified backup of digital data ensures that if something goes wrong, data won’t be lost and, once the backup version is restored to the production environment, operations can eventually resume.

There are no justifications for not having a backup process in place. In addition, organizations must routinely test that data backups are in fact recoverable and in usable form.

As noted above, backup can be a time-consuming and expensive process, but the cost must be considered a basic element of maintaining a digital environment. However, costs and time can be pared down by employing data reduction methods and by using cloud services rather than building out on-premises infrastructure.

Vendor lock-in must also be considered. Lock-in can factor into both the software and hardware components of a backup system because the product vendors may use proprietary processes or formats. For example, many backup applications save data in a proprietary format, meaning only that application can recover and restore data from those backups. It can make changing backup applications an arduous process. of restoring all backed-up data from the old app, followed by backing the data up again with the new backup software. Alternatively, organizations may opt to use the new application for all backup activity going forward while keeping the old app online to allow file recovery from old backup datasets.

Security processes must also be expanded to include data backups. The easiest way to ensure the security of backups is to store them on removable media such as tape and then to remove the tapes from the library and ship them to another location. Organizations that no longer use tape can back up their data to storage systems that are air-gapped -- that is, systems that are not connected to the internet or to any other networks that have external exposure.

There are several different ways to implement a backup system, each with its benefits and potential drawbacks. Some organizations use a combination of these approaches, depending on the type and criticality of the data.

Backup is an essential core process for any computing environment. Businesses run on data, and the loss of order entry, accounts payable or data from any key business system can debilitate operations. Having a restorable copy of the data can help ensure that business disruptions are only temporary.