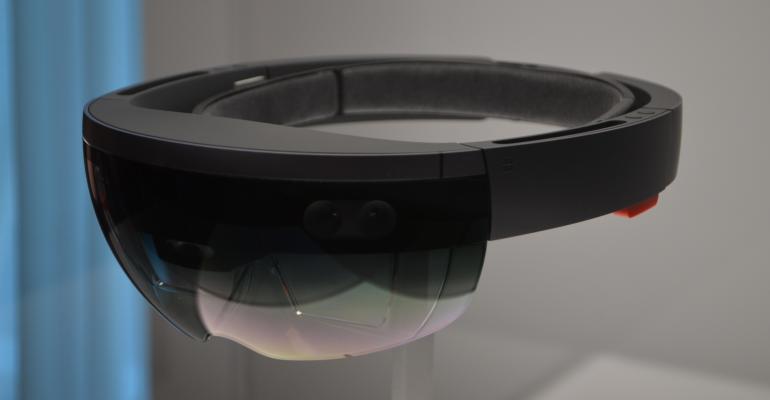 Between HoloLens, the new Windows Mixed Reality Portal in the Windows 10 Fall Creators Update, and the new Mixed Reality Head Mounted Displays from their OEM partners, Microsoft continues to push the boundaries on how work can be accomplished with a workforce spread around the world.

Yesterday Microsoft kicked off their Future Decoded Conference in London with a keynote featuring Panos Panay and Julia White who talked about the productive work experience employees can have when you combine hardware, software, and cloud services.

As the conference has continued today, a new perspective on the Modern Workplace was shared by Lorraine Bardeen who is Microsoft's General Manager for Hololens and Windows Experiences.

Ever since HoloLens was first unveiled in January 2015, Microsoft has stated that the device was intended to move us well beyond the boundaries of the typical office or classroom by using 3D holograms to see what is being designed or taught. This ability means companies/schools can save money by iterating and learning digitally instead of investing in expensive models, travel, etc. to accomplish the task at hand.

Well, that was the message from the Redmond company at Future Decoded in London today as Bardeen shared the companies plan to expand the availability of HoloLens to new countries in Europe and shared how Microsoft technologies come together to enable a new way to collaborate through Windows Mixed Reality.

For Microsoft, Windows Mixed Reality is a spectrum that ranges from the augmented reality of HoloLens to the full virtual reality experience when using one of the Head Mounted Displays (HMDs) that are now available from their OEM partners for the Windows 10 Fall Creators Update.

Microsoft believes the next level of workers that are going to benefit from this new Modern Workplace will be Firstline and Information Workers.

Firstline and Information Workers are described by Microsoft like this:

Firstline Workers are more than two billion people in roles that make them the first points of contact between a company and the world it serves. They are often the first to engage customers, the first to represent a company’s brand, and the first to see products and services in action. They form the backbone of many of the world’s largest industries, but they’ve been largely underserved by technology. Without them, the ambitions of many organizations could not be brought to life. Mixed reality is poised to help them work together, problem solve, and communicate in more immersive ways.

For Information Workers, mixed reality will enable collaboration and remote work both synchronously and asynchronously. They can interact more naturally with the digital world. With mixed reality workers can change the content, the people, or even the location of a meeting, in a matter of seconds. Mixed reality delivers interfaces that help workers act upon data generated from instrumented/intelligence devices, and connect seamlessly with others across physical space.

As I mentioned earlier, several Microsoft partners have now released their HMDs that can be used with the updated Windows Mixed Reality Portal in the Windows 10 Fall Creators Update and these became widely available on October 17th.

For those interested in the augmented reality that is possible with the HoloLens there is good news today as Microsoft is expanding the availability of the device to 29 new markets in Europe which brings the total of markets for HoloLens to 39.

As you can see - this is a huge expansion for its availability. When I was at Microsoft Ignite earlier this year, I saw they were doing virtual reality demos using the Windows Mixed Reality Portal as a way to administer Office 365. While I am not convinced that performing 2D activities in virtual reality is the way forward, I could certainly entertain the idea of managing users, permissions, and other activities in a Minority Report type fashion someday.

We are likely several years from that possibility but every advanced tech we use today started as a small experience that was grown and developed into its present form. Microsoft is investing a lot of time, talent, and money into the mixed reality spectrum so it is going to be interesting to see where it goes from here.