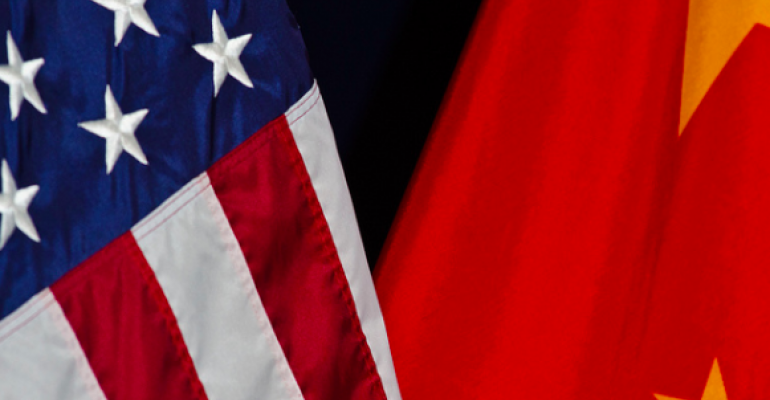 Artificial Intelligence Competition Heats Up Between U.S and China

The implications are complex and unsettling in the artificial intelligence competition between the United States and China.

When it comes to both artificial intelligence research and the invention of disruptive technologies, the United States is still No. 1 and is looking to maintain that position: In February, President Donald Trump signed an executive order on maintaining U.S. leadership in AI. But there are signs that this state of affairs can’t be taken for granted, as both the Chinese government and China-based companies race to use the country’s sheer population--and therefore data--advantage to catch up.

China has put in place a national plan to push AI research and implementation forward. Last October, President Xi Jinping said that China must control AI and its use, and called on party members of the National Congress to use the technology to push the country’s economy forward.

These efforts are not a secret, and they are not minor. In July 2018, Lt. Gen. VeraLynn Jamieson told Military.com that total spending on AI architecture in China was an estimated $12 billion in 2017, and could be as much as $70 billion by 2020. And a report released by the White House in October 2016 showed that, at that time, China was publishing more articles about deep learning (which includes AI, machine learning and other technologies) than the United States, and had increased its filing of AI-related patents by 200 percent.

China wants to be the world’s AI leader by 2030, its leadership has said, and they’re willing to spend to get there. China is making progress, but, perhaps more importantly, the country is using machine learning and artificial intelligence to its own ends--in ways that American researchers and industries either could not or would not.

Along with government and military investment, through various companies, artificial intelligence technologies are also being applied to everyday life across China. In June, Axios reported on the use of AI in a family convenience store via Alibaba, the dominant Chinese e-commerce company. Now heat sensors track foot traffic, revenues are up, and payment is made through the Alibaba platform with the Alipay app. Alibaba has given 1 million small stores and 100 large stores in China similar AI makeovers.

AI-led experiments like these are more easily implemented in China due to the country’s familiarity with surveillance--and, in some cases, its citizens’ lack of choice in the matter. There is evidence the Chinese government is using facial recognition technology to surveil the country’s minority Uighur Muslims, as many as 1 million of whom are believed to be detained in camps.

Stanley Chao is concerned that the vast amounts of data available in China will further the development of surveillance, with the use of facial recognition technology becoming widespread.

“I’m not looking to travel to China in five to 10 years,” said Chao, managing director of All In Consulting, a U.S. firm that helps Western businesses with developments in China and elsewhere in Asia. “China will be more advanced in cyber warfare and defense, unmanned weapons systems and intelligence analysis.”

China has a data advantage right now, but Armand Cucciniello III said that upper hand may not last forever. “If we pour more money and investment into developing bigger data capabilities and expand current systems, China will not necessarily have an advantage in this area,” said Cucciniello, a former U.S. diplomat and currently a senior adviser to United Nations Command and United States Forces Korea in South Korea.

Some of the potential uses for artificial intelligence and machine learning technologies are considered a non-starter in the United States, Cucciniello pointed out, where citizen surveillance and geo-tagging, unauthorized data collection, and the use of facial recognition for law enforcement purposes are going to be controversial at least and strongly opposed at most.

In the United States, technology is seen as a means to enhance democracy, Cucciniello said, whereas in China it’s viewed as a way to help establish control.

“In this sense, China may end up having the upper hand--not because of its technological capabilities in as much as its culture of authoritarianism and government regulations that do not prohibit it from using AI to monitor individuals,” Cucciniello said.

However, at this point, much of the technology used in AI and ML applications was built in the United States or other Western countries, said Andrew Pearson, the author of AI for Aviation. “Massive communities have been built up around this technology, and it's going to be hard for China to compete with new products that can takeover from this entrenched state,” he said.

It’s also important to realize that much of today's accomplishments in AI and deep learning rest on the chips developed by American tech companies that can handle this data in powerful ways, Pearson added.

“Huawei has created its own chip, but I doubt something they created in the past few years will reach the level of Nvidia’s, AMD’s and Intel's chips,” Pearson said. “They have been creating chips for decades, so it's hard to see Huawei, a newcomer to AI chip development, being much of a competitor to companies that have developed long-term technological relationships with the leaders of AI and deep learning--the Facebooks, Googles, Apples and Netflixes of the world.”

“I believe the Chinese will take the path dominated by government-funded cyber security and military applications with a secondary emphasis on commercial use, whereas the West will do the exact opposite,” Chao said.

Concern in the United States

The comments made by Lt. Gen. Jamieson aren’t the only signs that concern over China’s growing use and development of AI are emerging in the United States. In a report released in September, Chairman Will Hurd and Ranking Member Robin Kelly of the House Oversight and Reform IT subcommittee called on the U.S. administration to do more to support AI research, writing, “The United States cannot maintain its global leadership in AI absent political leadership from Congress and the Executive Branch.”

Hurd and Kelly maintained that the country that leads in AI will enjoy a variety of key advantages, including a more efficient economy, better-run industries across the board, access to autonomous weapons, the ability to pull off cyberattacks, mastery of data and--perhaps most importantly--the ability to set the global standards for the use of related technologies. Those are advantages the subcommittee members want held by the United States, not by China.

There are ways that Americans are going to have to contend with the implications of AI--in particular, its most disruptive applications and when its use does and does not make sense.

“As an American, I don’t want the government tracking me via facial recognition,” Cucciniello said. “Yet, also as an American, I would like it if my government could track known or suspected terrorists boarding planes and trains.”

The Trump administration has made China’s technological development a target in the ongoing trade dispute between the two countries. For example, last spring the United States demanded that Beijing dial back a planned $300 million in industrial upgrades that would include AI technologies.

Chao hopes that all the attention President Trump is giving to China’s “IP theft” will teach Western companies to not form joint ventures in China and to reduce R&D in China.

“Up until now, Chinese and Western companies shared technologies in many industries -- auto, aviation, high-speed rail, telecommunications, and semiconductor,” Chao said. “AI won’t take the same path.” He believes that China and the United States will develop AI on their own, and separately from each other, instead of cooperating on the technology.

It remains to be seen how the ongoing trade war between the U.S. and China affects the development of use of AI in either country in the long term.

“Discerning how the trade war between the U.S. and China affects AI and ML is a matter of determining which industries are heavily reliant upon, or have plans to expand the uses for, AI and ML,” Cucciniello said.

Trump’s first round of tariffs aimed at China focused on industrial equipment and machinery, and the round announced in September focused on consumer products. Because much of the developing trade war between the two countries focuses on manufacturing, that will likely be where its effects have the most noticeable impact, Cucciniello said.

“A game-changer is going to be when AI can be easily leveraged in the military-industrial realm, and in which the culture of one country affects the political will to use the technologies militarily,” Cucciniello said.

There’s real concern about lethal autonomous weapons, Cucciniello said, especially if the differences between the two countries increase and move beyond the economic and commercial realms.

As the Chinese economy grows generally and the country’s AI prowess develops more specifically, China’s ability to ignore or outright refuse the requests of the U.S. government only increases.

In some ways, the United States has directly, if unintentionally, helped China’s AI industry via the work experience Chinese tech employees gain in Silicon Valley and at educational institutions. Some of those nascent tech experts head back to China, bringing new skills and knowledge along with them. At the same time, such workers are critical for the development of the American AI sector, as well, especially considering the ongoing staffing challenges it sees.

There has been some concern that visa restrictions and an overall attitude against immigration may hurt American AI development if it continues. American restrictions on visas have the potential to hurt the U.S. more than China, Pearson said, because the U.S. has always depended on the importation of highly skilled professionals from other parts of the world. “America has always had to augment its technical staff with foreigners from Europe, China and India, as well as other places,” he said.

Pearson recently visited Hyderabad, a city whose talented programmers and medical professionals often end up working throughout Europe and the United States.

“There was a deep sense that things were changing and the opportunities they had in the U.S. was closing. They did see China as a potential opportunity, however, so what is America's loss will probably be China's gain,” Pearson said.

But Cucciniello does not see visa restrictions significantly harming either China or the United States.

“The Trump administration seems to be moving in the direction of at least wanting visas to be issued to highly skilled workers in industries that will benefit the American economy, rather than maintaining the current system whereby reuniting families, regardless of skills or employment status, is the goal,” he said.

In fact, the administration’s focus on bringing in skilled workers in areas where the United States can benefit from their expertise may assist AI development in the country, not harm it. “This administration’s policies, if enacted fully, may end up attracting more foreign workers skilled in AI and ML, rather than deterring them from coming to the United States,” Cucciniello said.

Another Competitor Enters the Ring

There is, of course, the possibility that this AI race will not remain between China and the United States alone.

China and the United States are at the AI/ML forefront right now, but that doesn’t mean other countries don’t want a piece of that pie. It remains to be see if they can become part of the conversation in a meaningful way, however.

“Russia would love to get a foothold in this realm, but its economic situation may prevent it from making heavy investment in the AI sector,” Cucciniello said.

But as leading countries develop the technology, and said technology simultaneously becomes less expensive and more widely available, it isn’t hard to imagine other countries using it in ways that the United States may find objectionable, Cucciniello said.

“Considering the nature of surveillance, it doesn’t take much to imagine any authoritative regime wanting to leverage AI for security purposes,” he said. In countries like North Korea and Iran, where citizen freedom is already limited and leaders have considerable power, it’s easy to imagine that AI technology is very attractive even if it never becomes widely accessible.