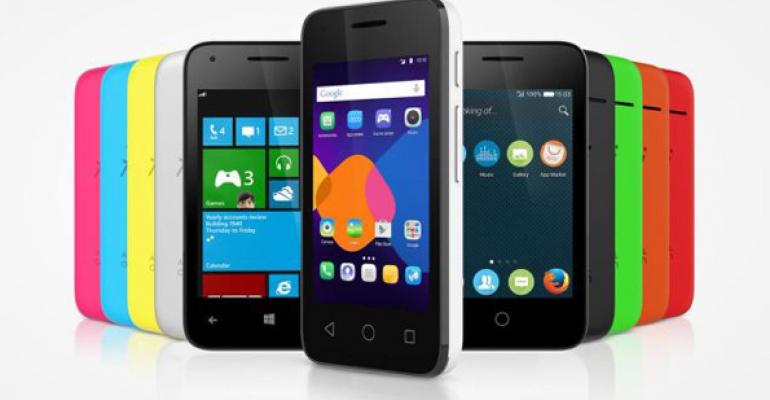 One Phone to Rule Them All? Pixi Will Run Android, Firefox OS and Windows Phone

Given the common hardware platform used by two of the three leading smart phone platforms—Android and Windows Phone—it's surprising we haven't seen more handsets available in versions for each. But Alcatel is about to take this concept to 11 and release smart phones that will run three different OSes—Android, Firefox and Windows Phone—and come in a variety of models.

This revelation comes in the wake of an announcement that Alcatel has purchased the Palm brand from HP. Palm enthusiasts—yes, they still exist, and in this case I totally get it—are hoping that this purchase would resuscitate their favorite brand, though I'd point to Gateway's purchase of the Amiga brand and Palm's purchase of the Be brand as examples of why this doesn't often work out well.

That said, Alcatel at least sounds like a telecommunications company and, heck, they do actually sell smart phones already. Who knew?

Anyway, according to Alcatel, the company will soon launch a new line of Pixi smart phones that will be "available with Firefox, Windows or Android, providing the flexibility to all consumers." I read this as "available in different versions for each," and not the holy grail of a single phone that can actually switch between each. But still. An interesting step forward.

"Our users do not want complicated systems," Alcatel Onetouch chief marketing officer Dan Dery says. "They want something familiar from their work environment in the office, but also on a smartphone."

It appears that the new Pixi smart phones will feature software-based front buttons so that they can easily switch between the three OSes. They will also be simple and inexpensive, and not high-end flagship phones. And there will be a variety of models, with the entry-level offering a tiny 3.5-inch screen and 3G connectivity. Other models will provide screens of 4-, 4.5- and 5-inches in size and 4G and LTE connectivity, Alcatel says.