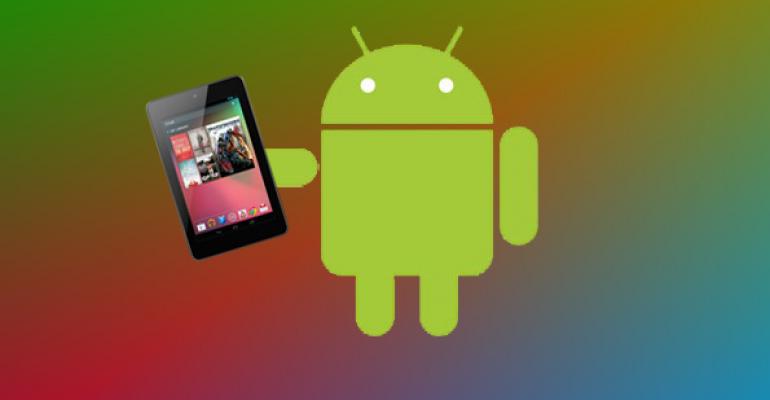 Android 4.2 Jelly Bean proves to be a solid update for the Nexus 7

As you might imagine, I’m swimming in devices at the moment, and while more are on the way, it’s hard to keep the ones I have on hand straight in my head. Sometimes, they get neglected: After getting increasingly frustrated that my Google Nexus 7 tablet wouldn’t turn on—was something wrong with it??—I realized that the battery had simply died. Oops. But when it came back up, an update awaited: Android 4.2 Jelly Bean. Nice!

(In my review of the Nexus 7, I noted that this device was “a credible 7-inch media tablet that is on par with the Amazon Kindle Fire and other Samsung Galaxy Tab 7.0 Plus,” and “a great choice that lets you mix and match ecosystems for apps, TV shows and movies, music, and books.”)

As its version number suggests, Android 4.2 isn’t a major leap over its predecessor. But that doesn’t mean there aren’t immediate and noticeable changes in this release in addition to the expect bug fixes. Indeed, the first time you boot into the new OS version, you’re greeted by a very Metro-like and stark new lock screen experience that I find quite pleasing.

The Nexus 7 home screen doesn’t seem to have changed much, and it offers the same clean look as its predecessor. But if you’re familiar with the Android notification system, where you drag down from the top of the screen to view and deal with system- and app-based notifications, then you’ll be interested to see that this gesture has been enhanced, and nicely. Swiping down on the left side of the top edge of the screen brings down notifications, as before. But when you swipe down on the right, a useful new UI, called Quick Settings appears.

Android 4.2 now supports multiple users, and though this is a feature I won’t use personally, it’s not hard to understand why this is a huge step forward. Multiple user support means that two or more people can share the same device, and each gets their own custom experience, with a unique lock screen, home screens, and apps and games.

The multiple user experience works great with Google accounts, of course, but you can also create secondary accounts that are not tied to Google accounts, ideal for parents with small children.

Android 4.2 builds on the desktop widgets from previous releases and adds lock screen widgets, which look and work exactly as expected. In fact, the new clock on the lock screen is a widget and if you don’t like it, you can move it or remove it. The lock screen itself now works much like the Android home screen, with multiple panels (when added) and access to widgets like Calendar, Gmail and Messaging. Given the viral nature of Android extensibility, I expect many more soon.

Android 4.2 also adds a picture frame feature called Daydream that triggers when the device is docked and/or charging. The default is an animated clock, but you can use cycling colors, Google Currents (a gorgeous and graphical magazine-like experience), or two different photo slideshows instead. It makes an idle tablet or phone both useful and pretty to look at.

The Nexus 7 doesn’t have a camera (thank God), so I wasn’t able to test a new Photo Sphere feature that looks (cough) a bit like a Microsoft Photosynth, but I suspect this will be a big deal on Android 4.2 handsets. It lets you create panoramic images that extend in all directions, and not just from left to right.

Other new features include virtual keyboard swipe support (for you Swype fans), a (pretty bad) Xbox Music-like personalization feature called Music Explorer (in Play Store, Music), and a new security feature that can help protect you from harmful apps. That latter feature is opt-in, and it amazingly works with apps from Amazon AppStore for Android in addition to Google Play apps.

Overall, Android 4.2 looks like a solid update, and it makes the Nexus 7 prettier and more useful. Imagine that.