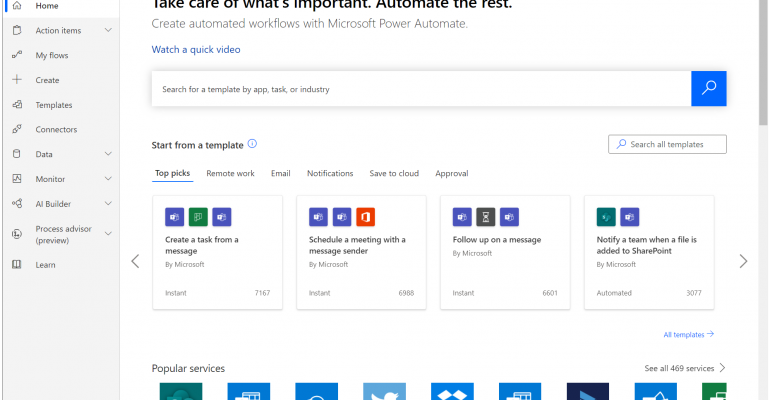 The pandemic has facilitated the acceleration of services like Microsoft’s Power Platform, Amazon’s Honeycode, and Google’s AppSheet that enable workers to automate business processes. In this article, we take a closer look at two Microsoft platforms that create and manage these automated workflows.

When looked at as an ecosystem of tools that help with automating processes across businesses, Microsoft’s Power Automate is the key service for IT pros who want to start optimizing employee workflow. Power Automate consists of two main entry points – one via the cloud and via a desktop app.  In this article, to distinguish between them, they will be referred to as Power Automate Cloud and Power Automate Desktop.

Each brings a unique spectrum of tools and services across multiple options to start automating processes in any business and at any skill level. Consider Power Automate as the cloud-based enterprise technology that allows users to automate business processes that access cloud services, desktop applications, and legacy systems. Power Automate Desktop broadens the existing robotic process automation (RPA) capabilities in Power Automate by giving end users prebuilt drag-and-drop actions to help them automate workflows or by letting them record their own desktop workflows to run later.

Stephen Siciliano, product lead for Microsoft Power Automate, says that Microsoft sees these two services as a continuum that allows for users to enter at a point that accommodates their current skill level and the task at hand. As those skills advance or the end goal changes, the user can move into other areas of the two services to expand their work and automation. This is possible because, although they are two separate services, the work performed in one is available in the other and vice versa to support that continuum concept. Work done in either Power Automate platform can also be integrated into the company’s Power Apps service to take automation and data even further.

Ryan Cunningham, who is the product lead for Microsoft Power Apps, concurs. “Microsoft is really all-in on Power Platform as a way to tie together many of the assets that we have in the cloud today.” Cunningham said.

In other words, while the pandemic has given the concept of low-code/no-code a new stage, the low-code/no-code technology is not necessarily new; it's based on things that have been at the core of many of the company’s services for some time.

Now that we have talked about the platform, let’s break down some key elements for both Power Automate and Power Automate Desktop, starting with a feature comparison. 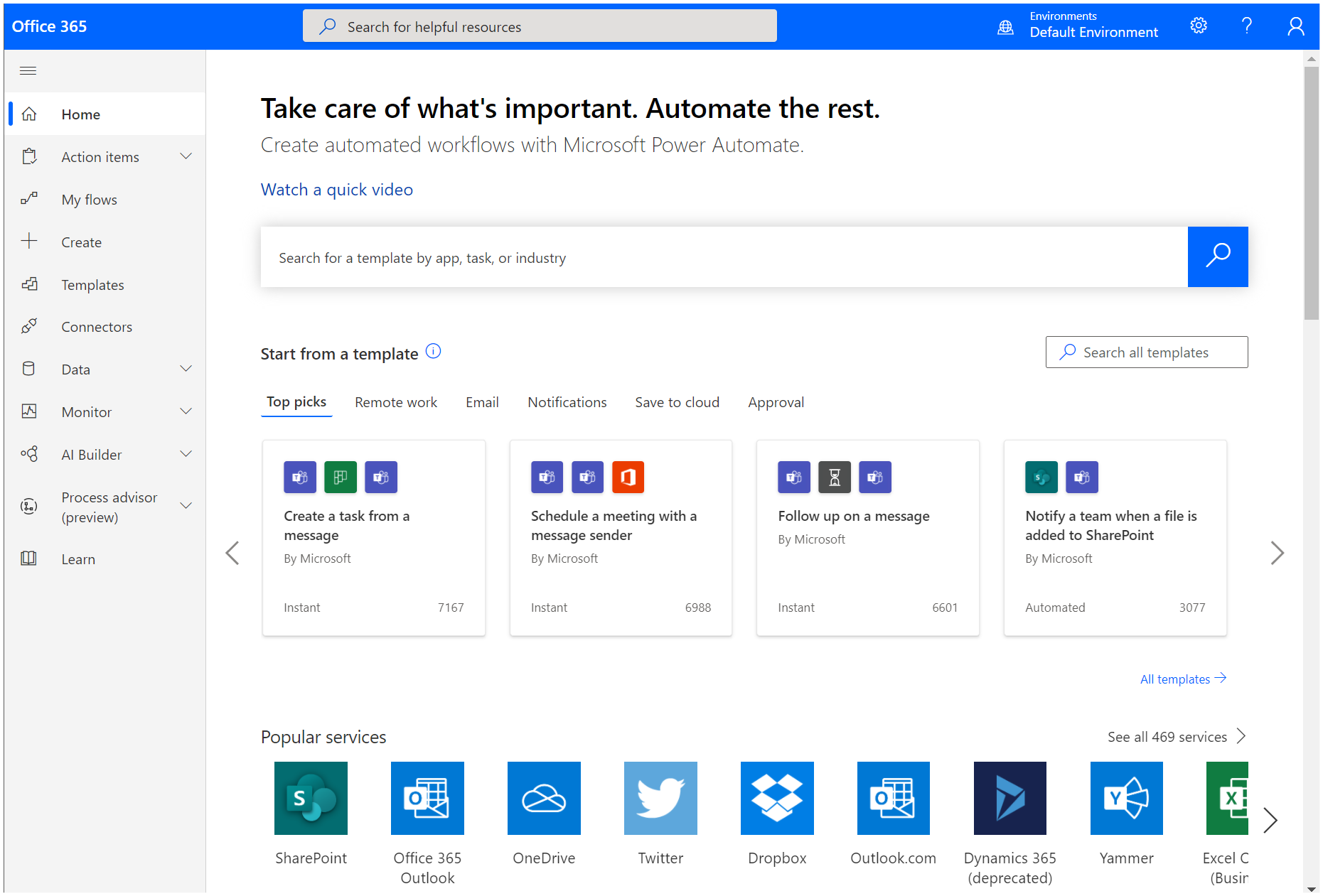 This completely web-based service is the best place to begin exploring automating processes in a company. New automation processes can begin from scratch, but one of the features in Power Automate is the massive collection of preprogrammed workflow templates, which may provide either a drop-in solution or the base for a company looking to automate specific workflow processes. Find that template, provide company-specific details for any services and connectors required for the workflow, then enable the new flow for testing, publication, and sharing. There are also plenty of customization options across the entire process to make the automation even more specific to a workflow.

There are more than 450 services available in the Power Automate cloud version, which includes connectors from Microsoft, Google, Amazon, Salesforce, Dropbox, Adobe, plus most social media platforms and other third-party services.

Examples of automations that can be accomplished with Power Automate include:

The absolute best way to learn how to use Power Automate is to just log in and begin tinkering with the various templates and services to see what can be created. Start simple to learn the UI and development process then dive into automating processes within the company. 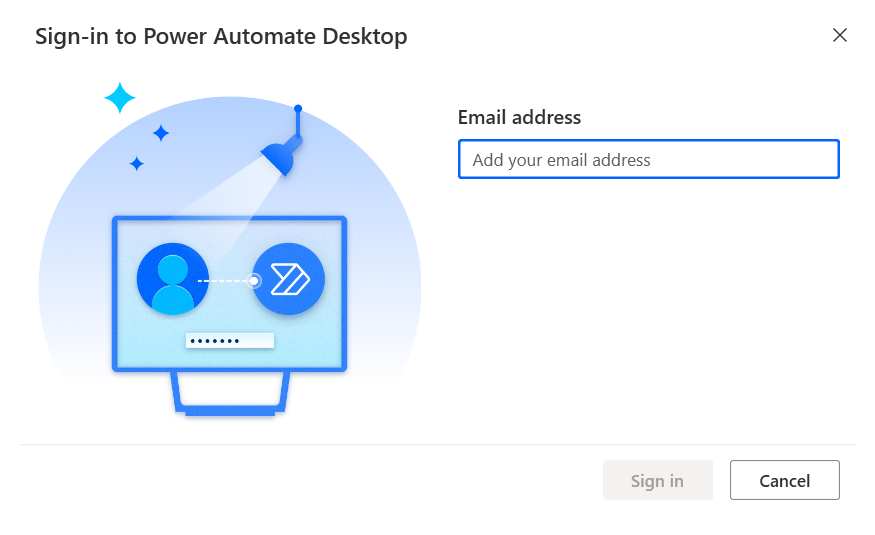 The newer service is licensed for any Windows 10 installation and is accessible through a desktop software download, provided IT administrations approve the installation on managed devices. There is no additional cost to access or use Power Automate Desktop.

While the Power Automate cloud version provides numerous templates to get citizen developers started on automating processes, Power Automate Desktop takes the process up a notch. By providing both a desktop and web recorder to help users automate workflows across desktop software such as Microsoft’s Office productivity suite or sites accessed through a compatible desktop web browser. Automating complex tasks are basically point and click.

Think of the desktop and web recorders as a camera that looks at a user’s Windows 10 desktop and monitors the actions that a user takes to complete various tasks. When a recording with either the desktop or web recorder is started, the mouse movement and mouse clicks taken to accomplish a task are monitored and documented. Once the task process is completed and the recorder is stopped, all of those steps are inserted into the software to create a step-by-step workflow for that particular task.

Of course, each recorded automation can also be customized. Existing flows can also be re-used as a base for creating new desktop flows.

Although Power Automate Desktop does not contain templates like the base Power Automate offering, it does contain a collection of prebuilt actions that can be used as flows are built to trigger various actions based on elements such as variables, loops, files, folders, system, mouse, keyboard, and other capabilities on the desktop.

Some scenarios for using Power Automate Desktop include:

For Power Automate Desktop, the best starting point is using the web or desktop recorders to capture desktop workflows. Once the recorder is started, just perform those repetitive tasks to help in automating processes across the desktop environment and ultimately save valuable time for other business areas that need more focused attention.

Just like with Power Automate, experiment to learn how things flow together to get a better understanding of the Power Automate Desktop service on a safe/non-volatile process that does not involve the deletion of data. Once the basics of automating processes are understood, then start applying those lessons to workflows.