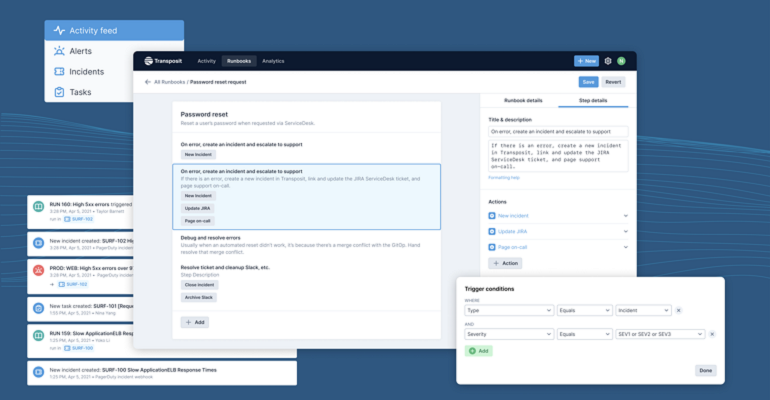 Transposit updates its platform to make it easier for organizations to stitch together different tools and processes into automated runbooks for DevOps process automation.

For San Francisco-based Transposit, successful DevOps is all about process orchestration that helps organizations gain better visibility, automation and control of DevOps. Transposit is now updating its platform with a summer 2021 update that brings new capabilities, including an advanced runbook builder for DevOps workflows and an improved activity feed that provides enhanced visibility into operations.

"If I were to summarize everything that we've been doing under one really big umbrella, I'd say it's around enabling a less technical type of user to leverage the features of Transposit," Divanny Lamas, CEO of Transposit, told ITPro Today.

A core element of the Transposit platform is a capability known as runbooks. With a runbook, a set of DevOps processes can be connected together in a way that enables the entire process to run in an automated approach. For example, a runbook could collect metrics from an observability tool, create an issue in a developer tracking tool and then message a developer about an issue.

Prior to the new update, runbooks had to be written in Markdown, which is a simple markup language for coding, according to Lamas. However, Transposit has realized over the last few months there have been an increasing number of new developers and operations people using the platform that aren't familiar with Markdown and want a simplified drag-and-drop experience.

With the new no-code runbook builder, the process of creating a runbook has been simplified, Lamas said.

"We've now taken all requirements for coding and even configuration and Markdown away, so anyone can drag and drop actions in our environment and create sophisticated workflows without a line of code," she said.

A key part of the runbook model is the ability to activate or trigger a certain response in one tool or process based on something that happened in a different tool. For example, if a testing tool identifies an error, that can trigger the creation of a trouble ticket in an incident management system. With the Transposit update, Lamas said there are now more configuration and customization options around how the platform responds to different event triggers.

Transposit is also expanding a library of open-source runbook workflows.

"Transposit open sources all of the workflows and integrations that we build, and we have a community element to the solution, so that they're all accessible openly for people," Lamas said. "Having the open-source library of scripts is a really important capability to start enabling standardization across companies and more canonical ways of doing some of the things that every single company does."

Another key update in the new Transposit release are enhancements to the activity feed, which provides a stream of updates into activity across a DevOps environment.

The visibility improvements make it easier for team members to get end-to-end visibility into everything that's going on around the environment, Lamas said. Extending out the visibility are expanded post mortem capabilities with new export capabilities that will enable analysis of an incident in a third-party system like Atlassian's Confluence.

"What we find at a lot of organizations is that they are using many DevOps tools in their environment, and really what they need is something that's able to orchestrate across them," she said.