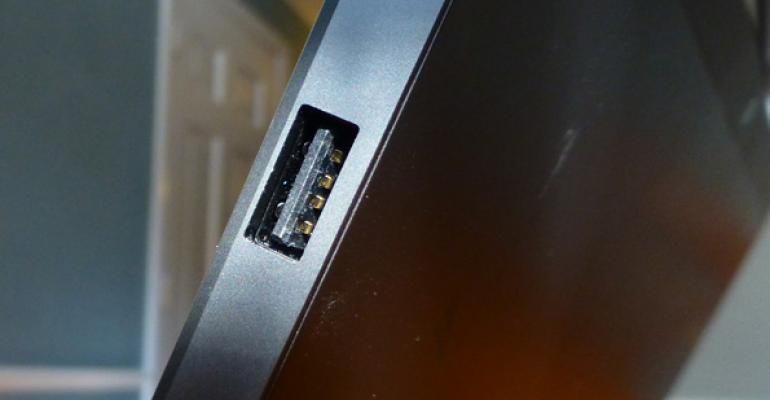 Can a single port on the Surface make all the difference in the world? Maybe

While the iPad has certain ecosystem advantages over the recently-released Surface with Windows RT, Microsoft’s entry does of course edge out the Apple device in some key areas as well. And another major advantage of the Surface over iPad is that it comes with the simplest of hardware niceties: A USB port.

Folks, ponder the wonders of USB.

This innocuous little port, inadequate as it is in its own way—it’s USB 2.0, not USB 3.0, thanks to limitations in the ARM chipset used by Surface with Windows RT—is in many ways the single biggest hardware innovation in Microsoft’s tablet. In fact, it’s a bigger deal, I think, than the keyboard covers that everyone is so excited about.

Why is that, you ask?

Because this USB port, combined with Windows RT’s built-in support for almost any useful hardware doo-dad imaginable, opens up a world of possibilities to Surface users, possibilities that are simply not available on the iPad.

(And let’s not forget that there are plenty of keyboards and keyboard covers available for the iPad, too.)

Key example: External hard drives and memory keys. I have a 1 TB USB hard drive, stocked with movies and TV shows, and my entire music collection, and when I’m on the road I have immediate access to that content on the Surface. Just plug in the drive and go, it works just like Windows. (Because it is Windows.) On the iPad, I’d have to plug that drive into a real PC, plug in the iPad, and then laboriously sync the content between the two. There’s nothing like a middle man to get in the way of a good experience.

You can add a USB hub to this port and expand the number of peripherals, leading me to believe that the number one problem with USB on Surface isn’t that it’s USB 2.0 but rather that there isn’t one more USB port built-in. Or, better yet, an available dock. But a USB hub solves the problem, for now, another thing you can’t do on iPad.

With Apple’s device, you need to purchase expensive, proprietary adapters to attach memory cards or cameras, or to access external displays. On Surface, you can plug a camera right into the USB port—can in fact charge it that way—and you can use normal micro HDMI cables for video out. Simpler. Better.

Of course, it’s not just USB-based storage. You can connect printers, speakers, keyboards, and mice. (Though Bluetooth is of course a better option.) An Xbox 360 (wired) controller. A Windows Phone 8 handset even. It sounds a bit exaggerated, but in some ways it is this USB port, combined with RT’s class drivers, that makes Surface more than just a companion device, and more of a real PC.

Certainly more so than the iPad.