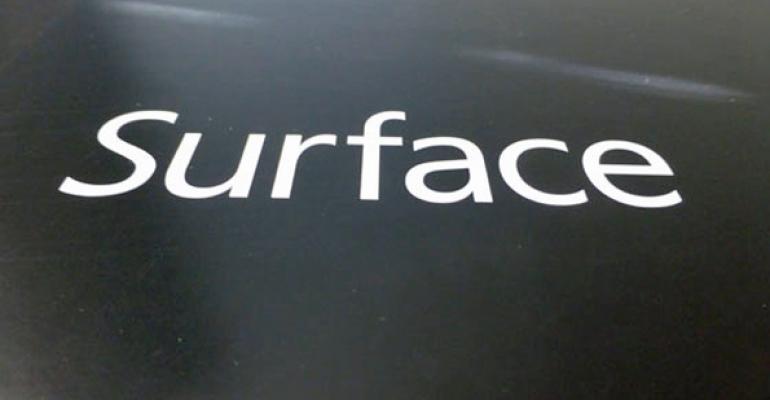 If only Surface with Windows 8 Pro had launched first....

The issue, of course, is compatibility.

Surface with Windows RT represents a future in which the Windows desktop is first deprecated and then removed, where Windows itself settles firmly and solely into the Metro mobile environment. To desktop PC adherents, this is a dystopian future, a hardline approach to ongoing industry trends. But if Microsoft is correct, and I think it is, this is the future. The problem, of course, is that it is the future, not the present. We don’t live in the future.

Surface with Windows RT is indeed a no compromises peek at the future of Windows. It offers a vestigial desktop environment only because it has to, because Microsoft didn’t have time to completely replace every single desktop utility with Metro equivalents, and because Office, today, runs almost solely in the desktop. This very rigid and inflexible system is not ideal for almost any users today because it is basically not Windows, not today. That is, it doesn’t benefit from almost any of the best reasons people choose Windows today.

That will change, assuming Microsoft’s vision for the future of Windows pans out and customers accept and embrace Metro. But engaging in a somewhat pointless game of what-if, imagine if things had gone like this:

In October 2012, Microsoft launches Surface with Windows 8 Pro alongside Windows 8 in a massive multi-product launch season which ideally would have included Office 2013 as well. Surface Pro is compared, favorably, to the day’s Ultrabooks, and thanks to its compatibility with existing desktop applications, browser plug-ins, and devices, it just works. And because of excitement over the amazing form factor and build quality, Surface Pro sells well and gives consumers and business users alike an innovative and desirable way to use both Metro and desktop experiences side by side in a near-ideal hybrid PC that makes the underlying OS’s own hybrid nature seem a lot less strange.

Thanks to the positive reaction to Surface Pro, despite a few niggling issues like just average battery life (4.5 to 5.5 hours depending on usage), developers, consumers, and business users embrace the Metro environment more quickly. The product doesn’t have to launch only at Microsoft Stores but can in fact be sold through all major electronics retailers and perhaps production is actually increased during the holiday selling season. Windows 8, as a result, gets off to a solid start, and instead of sales being disappointing, they actually jump 20 to 40 percent year-over-year, and compared to the Windows 7 launch time frame.

Emboldened by this success, Microsoft then launches Surface with Windows RT in January/February 2013 to a decidedly different market. In this alternate reality, Windows 8 has been a success and Metro app development has surged. So the notion of a new kind of Windows device, one that gets double the battery life of Surface Pro—9 to 10 hours—and costs about half the price of Surface Pro, and can run only Metro apps (plus Office RT) suddenly isn’t limiting at all. In fact, it’s pretty desirable since the new ecosystem has actually taken off and isn’t a huge question mark anymore. Rather than being a risky bet, Surface RT is now a perfectly reasonable and comparatively affordable choice.

OK, what I’ve just described is a fantasy. And to be fair, if anyone else had written this, I probably would have openly mocked it. But I can’t help but think that Microsoft had all the pieces in place for a Windows 8/Surface success story and that by launching these products in the wrong order, they basically blew it. In fact, I think Windows RT and Surface RT were launched first to satisfy some egotistical goal of providing that they could do it. This can and should have been avoided.

As time marches on, the market may correct the problems Microsoft caused by launching Surface RT first, alongside Windows 8. Surface Pro could be successful, and even Surface RT may find a niche for itself. We’ll see. But it didn’t have to be this way, and the path to Microsoft’s future vision of computing would have been better plotted by pushing the PC compatible OS and devices first. This is obvious.