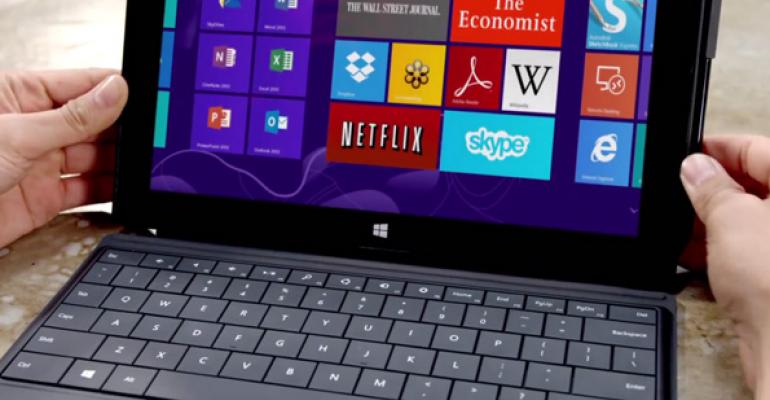 Flying home from Cancun today, I’m watching a young man a few rows up rotating his iPad in the air in front of him. He’s playing a racing game of some kind, has been since the flight attendants gave us the OK on using electronics. Watching him between the seats, I’m struck by how different the iPad really is from the Surface Pro, and how the two machines so closely mirror the visions of their makers. It was Apple’s Steve Jobs who infamously ushered in the so-called “post-PC” era three years ago when launching the first iPad. But Surface corresponds to Microsoft’s view that we’re actually in a “PC-Plus” era, one that will include traditional PCs as well as devices.

Taken in the light of these competing visions, the Surface Pro and iPad both make a lot of sense. And you don’t have to cart out the admittedly tired “consumption vs. creation” debate to make the point, though I do think it’s fair to say that where iPad falls firmly on the side of “consumption first, creation second” while Surface Pro is decidedly “creation first, consumption second.”

(On a side note, Surface RT sort of bridges these worlds in an interesting fashion, and in this way is the embodiment of Microsoft’s almost pathological desire to serve all markets. Taken on its own, and ignoring for a moment the immaturity of its supporting ecosystem, Surface RT is absolutely a consumption first/creation second device. But with a choice of keyboard covers and the bundled copy of Office 2013, it’s also got a foot firmly in the creation first/consumption second world.)

Since I am a doubter and something of a pessimist, I do of course wonder about Microsoft’s strategy.

I can’t deny that Surface Pro is successful at being both a hybrid-Ultrabook and a tablet. But in striving to be all things to all customers, Surface Pro is also something of a compromise. The weight and bulk of Surface Pro compared to iPad, and the battery life, make it less useful as a tablet. So while I could of course play a racing game on this device that I’m now typing this article on, it would be a bit awkward. More to the point, it’s unclear whether Microsoft’s vision—which is essentially to be all things to all people in a single device—is correct.

Granted, we’re in a transitionary period. Windows 8 is like a new-born foal, all elbows and knees, incomplete and unsure of itself, and future updates to the OS—as well as future, less compromising devices—may help this hybrid system come into its own. Too, that immature ecosystem, which impacts Surface Pro as well though less so than with Surface RT, gets better with each passing day.

Preparing for trip, I asked my kids, aged 14 and 11, what electronics they intended to bring with them. My son, the older child, said he would take his laptop—a hand-me-down ThinkPad—as well as his 4th generation iPod touch. “Why not the iPad?” I asked. (He has a hand-me-down iPad as well.) He prefers the iPod touch. There you go.

My daughter would also bring her laptop—and hand-me-down Macbook Air running Windows 7—and a Samsung Galaxy Tab 7.0 Plus tablet. “Why not the iPad?” I asked her too. (She also has a hand-me-down iPad, in this case an even older iPad 2.) “Eh. I like the little tablet better.”

So here are my kids, eschewing full-sized iPads for smaller devices, but still bringing along traditional laptops, the latter of which are used for a combination of (school) work and play. Both watched movies on the trip using the laptops, not the devices. Their choice.

One of the debates around Windows 8 is whether Microsoft would have been better off creating something called Windows 8 that was simply Windows 7 plus the desktop updates they did ship in Windows 8, and targeting that system at traditional PCs. Then they could have created this separate “Metro” OS and targeted a new class of touch-based Windows devices. As I wrote in Microsoft’s Mobile Strategy is Correct, however, that tactic would have failed. Traditional PC buyers would have stuck with Windows 8, and virtually no one would have purchased Metro devices, leaving the non-PC world to Android and iOS.

Of course, Microsoft’s current strategy creates this huge compromise, one where we have a hybrid/Frankenstein OS that runs on both traditional PCs as well as new hybrid/Frankenstein devices. One can only assume that Microsoft beats the drum for its “no compromises” vision so steadily in part to draw attention away from harsh reality.

That is, looking at the kid with his iPad, you see a singular vision for the device, which is comfortable being what it is. With Surface, and Windows 8 and hybrid devices in general, Microsoft seems to be trying too hard. This is a device that isn’t comfortable in its mission, because its mission is to be everything to everybody.

In a way, this has always been the Achilles Heel of Windows. In trying to please such a huge and diverse group of users, Windows can never been great at a handful of things. Instead, it’s good at everything. Apple’s devices pretty much go for the jugular, at least at inception: They’re great at a handful of things and pretty much useless at everything else. Over time, with updates, Apple’s products move closer to the middle-of-the-road miasma that dogs Windows. But Apple tends to move on to the next big thing before they let their products get truly mediocre.

Could the kid in front of me banged out a 1000 word article on his iPad during this flight? Maybe. But I think the iPad attracts people who don’t need or want to spend their time on such endeavors. Ultimately, Surface Pro seems to be designed specifically for the PC crowd, for the people who do want a real keyboard, God damn it, and always thought that a stylus with handwriting recognition was a great idea. It’s a way to dip your toe in the waters of truly mobile devices without giving up the comfort and security of a real PC.

It’s possible that Jobs’ vision of a post-PC world will eventually come to pass. But today, we are quite firmly in a PC-Plus world, one where traditional PCs, hybrid PCs, and media tablets exist side by side and are used, quite often, by many of the same people. Choice is good. And I’m going to choose to play a racing game on the Surface Pro for the remainder of the flight. What the heck, I still have 3 hours and 56 minutes of battery life left, far more time than this flight will last.