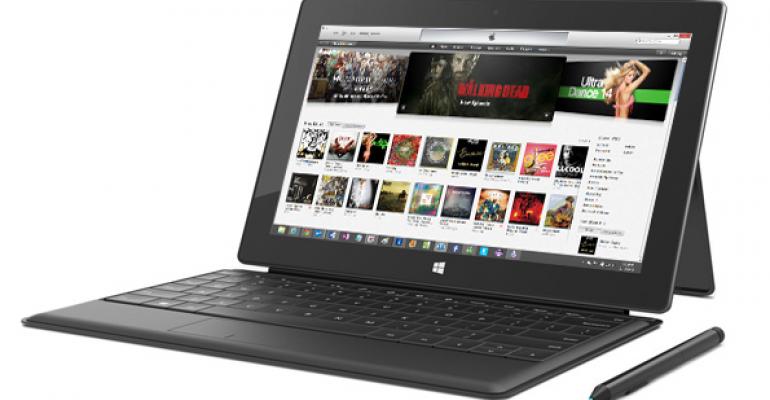 Sure, Surface Pro is compatible with everything, but the battery life sort of sinks it here

With its lackluster battery life, Surface with Windows 8 Pro isn’t necessarily the ideal choice for movies and other entertainment solutions. But Surface Pro has one big advantage over Surface RT in this category: It can run desktop applications like iTunes, Spotify and Rhapsody, opening it up to a far wider range of music, photo, and video apps.

I rented a few movies on Xbox Video before my trip to Cancun, but I rented those on Surface RT and, with just a couple of days left in the trip, I haven’t bothered to watch them yet. (I also had some trouble renting them, which I probably should have written about in Going Pro: Trouble in Paradise. Long story short, a reboot solved that issue.)

What I did have on Surface Pro, however, was the final four episodes of “America Horror Story” season 2, which I really did want to finish. I had purchased the episodes on iTunes, which as you know won’t work on Windows RT, so I downloaded them to the Surface Pro and figured I could get through a few of them on the flight to Mexico.

No such luck. There was a crackling sound in the headphones that I initially took to be a dying battery—I use Bose noise canceling headphones that require a single AAA battery—but replacing that didn’t fix the issues. So I ended up watching a few Rifftrax movies (“Birdemic – Live” and “When a Stranger Calls Back,” if you’re curious) I had purchased online instead, using the desktop VLC Media Player I prefer. That worked just fine, with no crackling, and the performance of the full-screen playback was excellent. The two movies combined are only 3:20 or so, so battery life wasn’t an issue.

Curious about the iTunes issues, I tried the show again from the hotel room, this time while on power. (As you may recall, my Surface Pro power supply gave up the ghost and I’ve been using a Surface RT power supply instead). No crackling this time, but the video and audio kept getting out of sync—you can most easily notice this when characters speak and their onscreen mouth movements don’t match up with what’s said—causing me to fiddle with restarting iTunes repeatedly.

After a while, I changed the power management scheme to High Performance, which shouldn’t be necessary, and sure enough it didn’t do a thing: For whatever reason, iTunes couldn’t play back the TV show video without getting out of sync. What’s odd is that I do this on my normal Ultrabook all the time, and looking at its specs in System control panel, I was surprised to discover that the Ultrabook has the exact same 1.7 GHz Intel Core i5-3317U processor as does the Surface Pro. The only meaningful differences between the two systems are the RAM—8 GB on the Ultrabook vs. 4 GB on Surface Pro—and the screen resolution: 1600 x 900 on the Ultrabook vs. 1920 x 1080 for Surface Pro. But since the HD iTunes movies are only 1280 x 720 (-ish, they’re actually 1280 x 718 for some reason), I’d be surprised if that were the issue.

That said, I can’t explain it.

Beyond this one curious and unexpected issue, Surface Pro of course opens up the world of PC-compatible entertainment apps. And in my case, at least, that makes a big difference. Yes, Surface RT has Netflix, but it doesn’t have Amazon Prime Video, and since the offline player is a Windows application and not a Metro app, there’s no way to access that content (yet) on Surface RT while on the go. Likewise, you can of course use Amazon Cloud Player from either system, but only Surface Pro is compatible with the MP3 Downloader and MP3 Uploader utilities that Amazon provides for iTunes and Windows Media Player interaction.

Only Surface Pro supports native clients for Pandora, Spotify and Rhapsody as well, though each has nice web interfaces (that don’t work offline; Pandora doesn’t work offline regardless).

And photo editing (and camera acquisition)? Don’t even get me started on how woefully inadequate the Metro-style Photos and Camera apps are. Windows Photo Gallery—a beautiful, full-featured desktop application—works just wonderfully with Surface Pro. As do such applications as Google Picasa and Flickr Uploadr (which appears to have been last updated when Windows Vista was still new, or what I call “the Carter administration”).

If there’s a better example of where Surface Pro’s combination of full compatibility and lackluster battery life is problematic, I’m not aware of it. And because solving the latter problem would let many use Surface Pro as their only device on the go, it makes the situation all the more poignant. As usual, Surface Pro is this close to being ideal.

I’ll keep trying, of course. I’ve got an HD copy of “Skyfall” to watch on the way home.