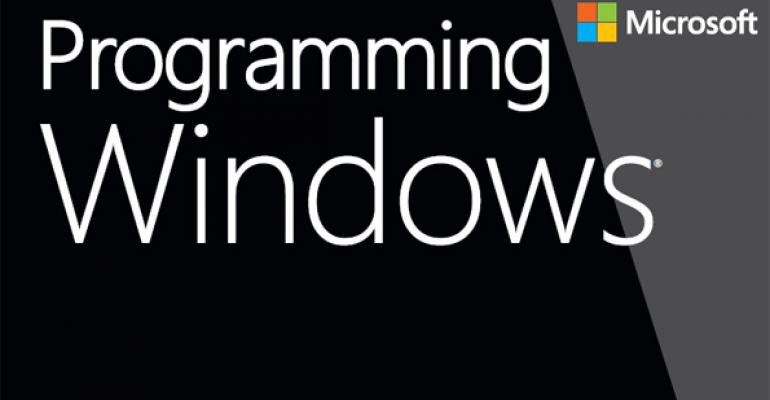 The original Windows software development writer shows us how its done

Throughout 2012, I provided updates about Windows developer guru Charles Petzold’s latest book, Programming Windows 6th Edition, which focuses on Metro-style programming for Windows 8. Well, after months and months of work, it’s done. And at a whopping 1136 pages, it’s also a monster.

Mr. Petzold hasn’t updated his blog with information about the new release yet, but I received an email alert about the release from the publisher, O’Reilly.

“The last time we sent a message we said, ‘We also expect the book’s final length might be closer to 1000 pages rather than the original 800 page estimate’,” the email notes. “The eBook ended up containing 1136 pages. We hope you enjoy each and every one of them, and thank you again for your support!”

Programming Windows 6th Edition is available today in PDF, Mobi, and ePub formats. The cost is $50.00, though it’s currently on sale for $40.00. When the book was announced early last year, early adopters were offered huge discounts, with those purchasing the book in beta getting it for just $10 (and getting all subsequent updates, including this final release, for free). The price went up a bit with each subsequent release.

In final form, Programming Windows 6th Edition includes an introduction and 19 chapters that range from “elemental” topics like XAML syntax, based event handling, and app bars and pop-ups to “specialties” like native code, sharing and printing, and sensors. If you want to learn how to develop Metro style apps in C#/XAML, this is clearly the way to start. (I first started reading Petzold way back in the early 1990s. As the original Windows software development writer, he knows his stuff.)

You can find out more about Programming Windows 6th Edition on the O’Reilly web site.