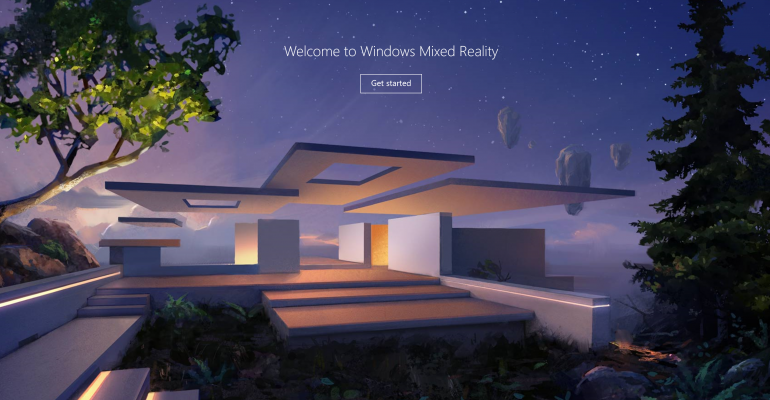 After trying to get Mixed Reality fully implemented in their Creators Update earlier this year, Microsoft finally sees the merging of the software and hardware in the Fall Creators Update to deliver this feature to end users. Along with improved tools such as Paint 3D and the Mixed Reality Viewer, there are now new avenues of creation for those on Windows 10.

Microsoft first announced 3D for Everyone and Windows Mixed Reality last fall in New York City when they launched Surface Studio. At the same time they told everyone that the Spring 2017 update for Windows 10 would be called the Creators Update and focus on the theme of creating.

Well the Creators Update arrived this past April however, the expected Head Mounted Displays (HMDs) from the companies OEM partners were not ready for market and while the software elements of Mixed Reality were ready the entire experience was not since there were no Mixed Reality Headsets available.

Now, with the release of the Windows 10 Fall Creators Update, the software and hardware are coming together and these various HMDs are now available for purchase from the Microsoft Store.

So let's run down the various elements of Windows Mixed Reality and 3D that are part of the Fall Creators Update. The Mixed Reality Portal is installed by default in the Fall Creators Update and allows you to use an HMD to interact with 2D and 3D objects, apps, and videos in your own version of the default cliff side house in the portal. It is fully customizable and you can pin shortcuts to these objects, videos and even use your 2D apps anywhere in the house.

Microsoft has announced several partnerships for content such as games and 360 degree video to help build the immersive experience from the Mixed Reality Portal. Microsoft's recent acquisition of a virtual reality social network called AltSpaceVR will soon add a social element to the portal so you can connect with family and friends virtually.

As I mentioned above, the hardware is finally being released that unlocks the potential of mixed reality in the Windows 10 Fall Creators Update and all of them are available from the Microsoft Store along with an option to purchase Microsoft's Windows Mixed Reality Motion Controllers. The controllers retail for approximately $100 but you can find bundled options with all of the HMDs as a means to get both your headset and the controllers in one purchase. I have recently had an opportunity to try out these new controllers and they are very comfortable, easy to get acclimated with after just a couple of minutes in use, and really make moving around in the Mixed Reality Portal super easy. I have previously tried to use an Xbox controller for moving around the cliff side house and it was not easy at all - these controllers make all the difference for the experience.

The HMDs are tethered to your PC through a USB and HDMI connection and most come with at least a six foot cable. The one plus to the design of these headsets is that they use Inside-Out Mapping cameras that are part of the headset and do not need external markers to know the size of your work space for Mixed Reality.

These two tools were also announced last fall in New York City alongside of the Surface Studio and they actually were part of the Creators Update which was available in April of this year.

Paint 3D is the new modernized replacement for the beloved Paint that has been part of Windows for over 35 years. When Microsoft announced that Paint would be deprecated in the Windows 10 Fall Creators Update it caused quite a stir among fans to say the least. However, the plan all along was to have Paint 3D to replace the functionality of Paint and it does that in spades and then adds all of the 3D capabilities to the program. Remix3D.com is integrated into Paint 3D and is a web based repository of 3D objects, some created by other 3D creators and end users, that can be shared and incorporated into your own 3D work and then shared once again. It has search and filter capabilities to help you find just the right object for your own project and can be a great idea generator as you see how others have created with those 3D elements. The 3D objects you drop into the real work can be resized to your preferences and then using the Mixed Reality Viewer you can walk around the object and see it from all sides.

Unfortunately, after announcing this feature in May to an education focused audience in New York City and creating some buzz we did not see the app until just a few weeks ago. Since then Apple and Google have both announced their own augmented reality tools that allow for interactions, sound, and multiple 3D models in a scene and this means Microsoft has some catching up to do with their own offering.

Microsoft has added a content area to the Microsoft Store under My movies & TV that will show you a collection of 360 degree immersive videos that can be used with Windows Mixed Reality and one of the HMDs that are available. In addition, as we get past the release of the Fall Creators Update we should also see apps from HoloLens developers begin to make their way into the Microsoft Store as they make them compatible with Windows Mixed Reality.

One such app that I have seen demoed on HoloLens that is already waiting for Windows Mixed Reality users is Walk the World by Joost van Schaik. This app allows you to explore the world in 3D - of course movement is still limited by your tethered HMD but there are 10 pre-defined locations you can check out.

I would expect the pace of these kind of apps to pick up as the HMDs become more widely available and used on the Windows 10 Fall Creators Update.