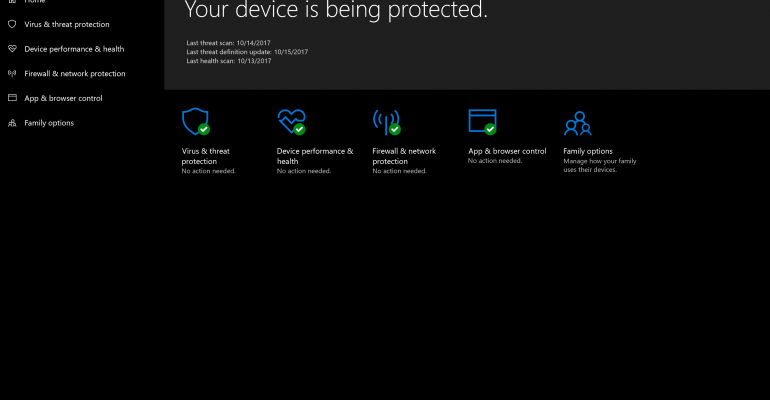 From improved controls to keep your system from becoming the victim of a malware attack like WannaCry and providing new tools to reset your PIN or recover your account on a Windows 10 Device, the security profile of the Windows 10 Fall Creators Update continues to improve.

Like many elements of Windows 10, the security features see new enhancements with every successive feature update release. The Windows 10 Fall Creators Update is no exception.

Many of you will recall the widespread impact earlier this year of malware such as WannaCry and Petya. The primary goal of those and similar malware attacks was to encrypt your data, then demand a ransom to provide the codes necessary to unlock/decrypt those files.

Microsoft was already rolling out a new security feature with the Fall Creators Update that implemented a way to protect key folders on your system called Controlled Folder Access.

In addition to that feature, Microsoft has also added the ability to recover your PIN and account from the Lock Screen of a Windows 10 device without needing a Password Reset Disk. This is a huge move forward for many users, but it does require the use of Two-Factor Authentication and a Microsoft Account.

Lets take a look at these two features in the Windows 10 Fall Creators Update.

As I mentioned earlier, this feature allows you to designate certain folders on your system and prevent them from being changed by malware. It also has an element where you can set certain programs/apps to have permission into those folders for write permissions. The process is easy enough to use but you should be 100% sure that any app/program you give permission to in this option is valid and safe.

From a security and convenience perspective this is one of my favorite new features in the Fall Creators Update. The use of PIN's for system access have become the norm under Windows 10 and if you use Windows Hello for facial or fingerprint recognition you are required to establish a PIN as a backup to those biometic authentication methods.

As for passwords, in previous versions of Windows you had to have a prepared Password Reset Disk in order to recover an account on a device when you lost/forgot the password. I can tell you from experience that hardly no one ever prepared one of those disks for their system.

Well now with this new option in the Windows 10 Fall Creators Update you no longer need that reset disk. If you are using a Microsoft Account and Two-Factor Authentication you can now recover your PIN and/or password for any account on a Windows 10 device. I fully detailed this process when the feature was first introduced in Windows 10 Redstone 3 testing builds so you can check that out for a full run through.

This is quite secure because each method requires a secondary piece of identification. For a PIN reset, you must provide your Microsoft Account password on the device and for an account password recovery you must be using Two-Factor Authentication of some sort to get a code to validate your identify for that account.

Beyond the benefits of using a Microsoft Account to tie together your data and ecosystem of devices, using one so you can take advantage of this new feature when it is necessary is another big plus to using that Microsoft Account with Windows 10 Fall Creators Update.