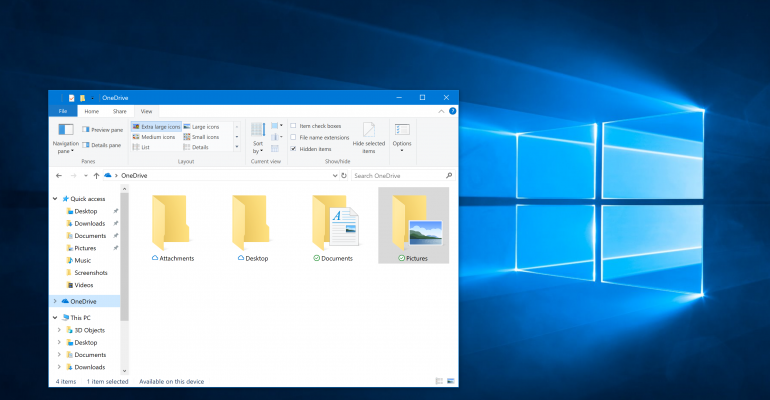 Spread across the Windows 10 Fall Creators Update are new features, both large and small, that can improve your productivity.

Because Windows 10 receives major feature updates twice each year, the changes we see in the operating system are not always huge shifts like we used to see with the once-every-three-years updates to Windows. This new pace of agile development results in usually one or two big new features with each semi-annual update, surrounded by multiple incremental improvements across the OS.

Here are incremental changes that make life on Windows 10 much more productive.

The return of OneDrive Files On-Demand -- a feature pulled from Windows 10 just before its initial release two years ago -- is a welcome enhancement. There are several incremental changes in the way the service was implemented previously. These changes make it much more robust in the Fall Creators Update and it headlines several features that will increase productivity in the operating system.

The return of this feature is much more tightly integrated into the Windows 10 file system and apps can be updated to learn how to handle files synced via OneDrive based on the files status. The basic premise of OneDrive Files On-Demand is that you can see your entire cloud storage structure without being required to sync everything to your local device to make that view possible. You also have the option to selectively sync the files you want to be fully available on your hard drive at all times --  otherwise Windows 10 will manage this for you based on file usage. One of the reasons given for the removal of OneDrive Files On-demand two years ago was user confusion -- apparently whether a file was available on a device or not was unclear to some users. So Microsoft improved the labeling of files to make their status clearer.

Here is what I wrote earlier this year about those statuses for the new implementation of OneDrive Files On-Demand:

Only files that you mark as "Always keep on this device" have the green circle with the white check mark. These files download to your device and take up space, but they’re always there for you even when you’re offline.

As mentioned above, these file states are managed dynamically by OneDrive to keep your most used files available locally however, even the new OneDrive Files On-Demand in the Fall Creators Update requires that you verify the files you need offline access to are stored on your local drive and that you sync them accordingly before going offline.

When this feature was announced back at Build 2017 in May of this year, it was very well received by the developer audience in attendance. I suspect it will be a welcomed return for most Windows 10 users.

Note: OneDrive Files On-Demand only works with the Fall Creators Update and beyond - it is not backwards compatible to earlier versions of the operating system.

Microsoft actually did some A/B testing of this feature in the final development builds of the Creators Update but like other features it did not make the final version. As you can see, the slider allows you to pick a spot between Best battery life and Best performance and depending on your choice on the scale makes changes to your systems power management settings in order to strike a balance between these two key aspects of your system.

This scale allows you to be as aggressive as you want to be to either get the best possible battery life or performance depending on the task at hand.

If your device uses a stylus that is paired to the device then you can now keep track of that pen using this feature in the Windows 10 Fall Creators Update. Just go to the Find my device settings page in the Windows Settings app to get started: Find My Pen in the Windows 10 Fall Creators Update

Clicking on the Go here to track it link will open up the Maps app and provide you the last know location of that pen within a couple hundred feet. That should be more than helpful enough to at least know the general area the pen is if you left it behind in a coffee shop or other location.

The calculator in Windows 10 is extremely robust. It has options for using it in several modes of calculations such as Scientific, Programmer, and Dates plus it has built in converters for things like Volume, Length, and Energy to name just a few.

The latest addition to Calculator in the Windows 10 fall Creators Update is a Currency Converter. You will find currency rates from most countries available and the exchange rates are provided in real time when you make a conversion.

For any UWP apps that create sound such as Groove, TV & Movies, or Microsoft Edge you can now manage those volume levels from within the systems Volume Mixer: If you are a regular user of Emoji then this new feature in the Windows 10 Fall Creators Update will give you quick access to all of the available emoji in the operating system.

The panel/picker can be opened while your cursor is any text entry field by holding down the Windows key and either the period (.) or semi-colon (;). Fashioned after the swipe keyboard on Windows 10 Mobile, you can now use the same functionality on the Windows 10 desktop with devices that have a touch screen. The layout of this keyboard is not adjustable but it does adjust better on smaller screens so it works best on those type of touch screen devices like tablets but many will appreciate having this capability along with the predictive word feature on more than just a phone sized device. You can run this cleanup process manually or set it to run routinely as part of system maintenance. If you recently installed a new feature update of Windows 10 then you will also find the option to remove that previous version of Windows on this page as well.