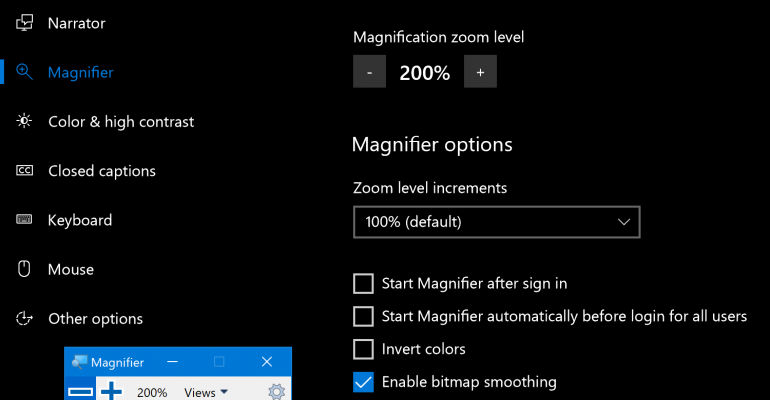 Microsoft has demonstrated a consistent commitment to accessible computing with its Windows 10 features, and the Fall Creators Update showcases several new tweaks to increase access for all users.

Microsoft has an established history of incorporating usability features into Windows 10 (see the accessibility features incorporated into the anniversary update, for example). In this update, they continue with adding and refining features to expand usability. The ones to pay attention to:

Note that the Eye Tracking feature will be released with the Fall Creators Update as a beta because the team is continuing to refine the feature.

Here is a look at some of these new enhancements and features.

In the Fall Creators Update, the settings and options for the Magnifier in Windows 10 received a major overhaul. Note: There are at least as many settings on this page when you scroll down.

Just for a quick comparison - here is what that same settings page looks like in the Creators Update that was released earlier this year: As you can see they have made significant changes to the Magnifier to make it even more useful and a standard part of the operating system instead of having to worry about third party software for the same functionality.

This feature actually started out during one of Microsoft's annual employee Hackathon's as a challenge from Steve Gleason a former NFL football player who lives with Lou Gehrig's disease.

That two years worth of effort and testing has resulted in its addition to Windows 10 in the Fall Creators Update. This is a critical feature for accessibility in Windows for individuals with this type of a neural muscular disease because the eye muscle is one of the few muscles that are unaffected by the disease. This provides the user capabilities that greatly expand their world through communications and connectivity.

You can read more about this feature in an article I wrote earlier this year when it was released for testing.

As part of the enhancements to color and contrast for accessibility purposes a new keyboard shortcut has been added to the Fall Creators Update that allows a user to quickly switch between the standard and high contrast view of the Windows 10 desktop.

By pressing the Windows Key + CTRL + C you can shift between these two settings.