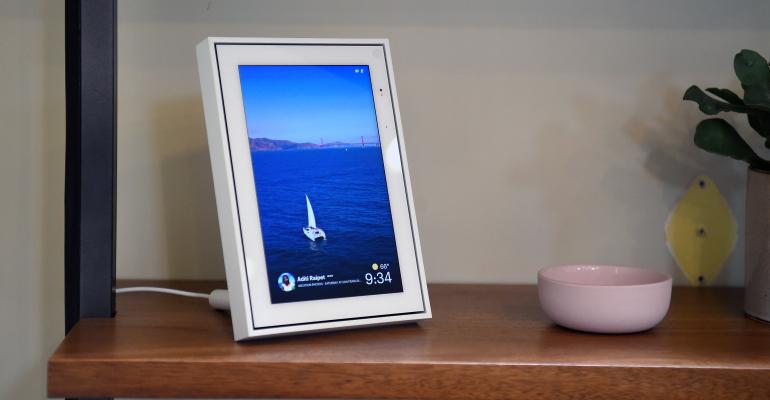 The star attraction of this product line is its wide-angle video camera, which can automatically follow a person and zoom in on them as they move around a room during a chat.

(Bloomberg) -- Facebook’s Portal does exactly what the company says: it serves as a high-end home camera for video conferencing. With an improved design, this year’s iteration better blends into home decors, and with a lower price, it’s attainable for a wider group of people. What it doesn’t do, however, is offer any reassurance that Facebook has finally solved the privacy worry trifecta of always-listening voice assistants, self-activating video cameras and its own tarnished history with user data.

The new 10-inch device looks like a picture frame that could fit into a row of family photos on a mantelpiece. It can be situated in either portrait or landscape orientation, and its build quality is fine for a $179 device (there’s also an 8-inch Portal Mini for $129). The star attraction of this product line is its wide-angle video camera, which can automatically follow a person and zoom in on them as they move around a room during a chat. It neatly combines the unnerving and the magical aspects of technology, and if multiple people are present in the frame, the camera will move between them as they are talking and users can choose a person to focus on at any time.

In calls, you can pin animated masks, such as a dragon, over users’ faces and also modify their voices. That’s one small step toward giving people more control over what representations of themselves they send over the internet. There are also options to share a book or listen to music together with the person on the other end of a call with the help of Spotify, Pandora or iHeartRadio. The integrated speaker sounds great for video chatting, but it isn’t likely to replace a dedicated music device.

As a video chat tool, Portal works as advertised. But it’s difficult to recommend when you can buy a far more functional device like a tablet or a smart home speaker with a screen and camera for either the same price or a little bit more. The Portal platform still suffers from a pronounced paucity of apps, including ones to make video calls with that aren’t provided by Facebook itself.

Facebook is banking on its advanced camera to pull users away from more functional smart screens, but that feature alone probably isn’t enough for most people. Amazon’s new Echo Show 8 costs the same as the smaller Portal, while Google’s Nest Hub Max costs $50 more than the Portal and is a much more comprehensive product thanks to Google’s smart assistant and web integrations. If users are looking just to video chat, that could also be accomplished via video conferencing capabilities now built into virtually every modern phone and tablet.

With the Portal, Facebook could have rivaled the Amazon Echo Show and smart displays running Google’s optimized version of Android by creating a device that sits at the center of the Facebook ecosystem with better video chat as its key selling point, but the company limited itself by focusing solely on the video conferencing. Built-in Alexa functionality gives the Portal some added capabilities, but even that has the downside of forcing users to balance two voice assistants, with one for things like the weather and another for controlling video chat and device settings. Two voice assistants also mean two potential points of privacy vulnerability — and both Amazon and Facebook have had contractors listening to users’ voice requests to their respective assistants.

The main software screen on the Portal shows you a grid of your favorite contacts. Calls take place over Facebook Messenger so you can reach people on whatever device they have that app running. WhatsApp is also integrated. Beyond the main screen, there is a screen saver mode, which turns the Portal into a digital picture frame of your photos from Facebook. There’s also a grid of giant app icons, though the built-in app selection is currently a ghost town. It does include a web browser, Facebook Watch, and the same music apps available within video calls, and Facebook says it will be sharing information on additional apps “in the coming months.”

The device might have been useful as a mini recording studio for live streaming — which would effectively leverage Facebook’s vast user base and established streaming platform -- but that’s not a feature that’s currently on offer. Facebook says it’s in the works, however, and is coming later this year.

In terms of privacy, Facebook’s hardware team is doing as much as it probably can. The Portal has a built-in mechanical shutter to cover the camera and the same toggle can also disable listening. The device easily allows users to opt out of having their voice command recordings stored and listened to by Facebook, though there isn’t a unified menu to simultaneously disable such a setting for both Facebook and Amazon’s on-board assistants. Facebook also says that it doesn’t listen to or store any video calls and that those are encrypted.

Those protections don’t change the fact that the Portal inherently is a Facebook product. That means, according to the company, that the Portal will collect information on user logins, if they made a call, and how often they used a particular feature. Facebook says this is in order to inform which ads a user sees on Facebook. For example, Facebook says that if a user makes many video calls, they might see Facebook ads about video calling. Voice input or things said on a video call won’t be used for advertising, however.

The existing public perception of Facebook, given its several privacy-related scandals in recent years, won’t help. Throw in Amazon’s recently controversial listening practices with Alexa, and this is a device that some people — no matter how great the camera technology — will simply refuse to have in their personal space.

One of the best tech features of the Portal device could also double as a privacy concern for some. During a video call, because of the wide-angle lens, a user is able to pan around the other caller’s video frame without explicit permission. College kids in dorm rooms everywhere are likely to find this a particularly challenging and invasive feature when calling back home to their parents.