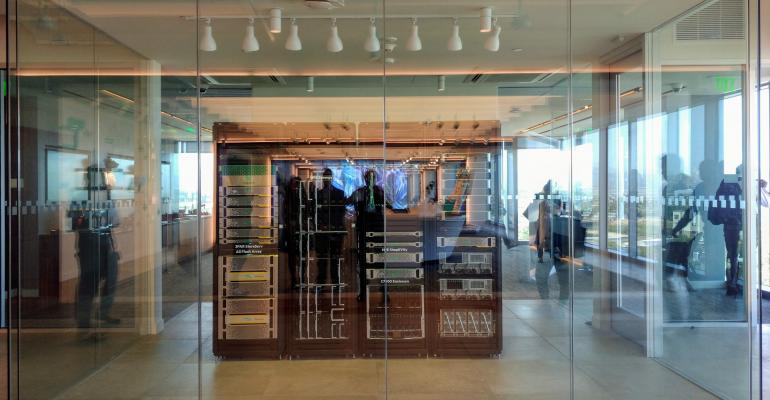 Yevgeniy Sverdlik
Racks of HPE hardware on display in the customer meeting center at the company's headquarters in San Jose, California
Cloud Computing and Edge Computing>Hybrid Cloud and Multicloud

The company on Tuesday announced HPE GreenLake for analytics, which enables enterprises to unify, modernize and analyze all their data everywhere it’s stored, from the edge to the cloud. HPE also introduced two data-protection as-a-service offerings to provide enterprises with ransomware protection and fast data backup and recovery services.

HPE’s announcements are the latest additions to its GreenLake platform, the company’s on-premises solutions that are offered through a cloudlike, subscription-based, as-a-service model. In 2019, the company pledged to make every product it sold as a service – and its success has prompted competing hardware makers, such as Dell and Cisco, to follow suit.

In fact, HPE on Tuesday announced that the company continues to gain momentum with GreenLake adoption. GreenLake now has more than 1,200 customers, totaling $5.2 billion in total contract value. During the third quarter of 2021, the company’s as-a-service orders were up 46% year-over-year, it said.

“Initially, they focused on the main infrastructure components, but now, they’re shifting their focus more on making it complete,” Nadkarni said to Data Center Knowledge.

Essentially, HPE is federating all types of data, so the data can be analyzed under the same framework, Nadkarni said.

“They’re creating a federation layer that allows you to have all the analytics for all your cloud-native environments in a single pane of glass,” he said.

More specifically, HPE made three announcements for its HPE GreenLake for analytics service. According to the blog post, they are:

GreenLake now includes HPE Backup and Recovery Service for VMware. Delivered through a software-as-a-service console, the service allows customers to easily back up their virtual machines on-premises and in hybrid cloud deployments by using three simple steps, a process that takes less than five minutes, wrote Tom Black, senior vice president and general manager of HPE Storage, in another blog post published Tuesday.

“There are no media servers, appliances or targets to manage. Customers can recover instantly on-prem, retain cost-effective long-term backups in the public cloud and enjoy the security of backups that are protected against ransomware attacks,” Black wrote in the blog post.

The data protection services are available immediately. The analytics services will be available in early 2022, HPE executives said.