/sites/all/themes/penton_subtheme_itprotoday/images/logos/footer.png
Recent
Recent
IT Pros Aren't Missing the Office
May 16, 2022
25 Years Ago: How Deep Blue vs. Kasparov Changed AI Forever
May 13, 2022
Create If Else Statements in PowerShell
May 12, 2022
Low Code: Satisfying Meal or Junk Food?
May 11, 2022
Featured
What Makes Data Science Teams Thrive
Mar 04, 2022
5 Ways for Data Scientists to Improve Communication Skills
Apr 21, 2022
How to Spot the Warning Signs of Ransomware Attacks
Apr 20, 2022
Best Windows 11 Tips and Tricks: Top 11 Articles
Mar 18, 2022
Practical SQL Server
brought to you by 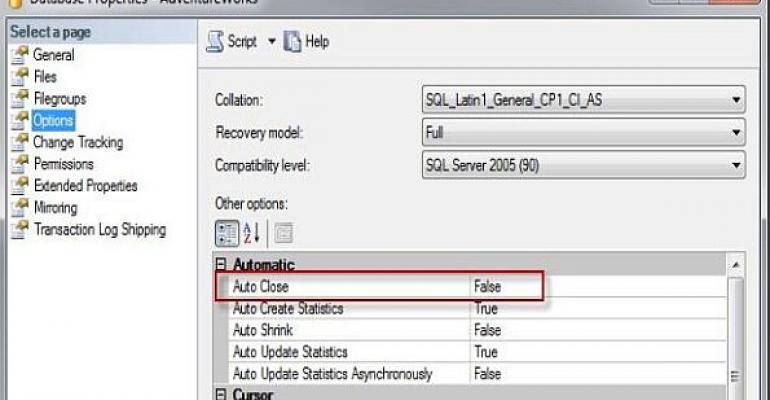 What is AutoClose & Why is It Bad?

AutoClose is a database option or setting – set on a database by database basis (meaning that it can’t be controlled at the server level).

According to Books Online:

When set to ON, the database is shut down cleanly and its resources are freed after the last user exits. The database automatically reopens when a user tries to use the database again.

When set to OFF, the database remains open after the last user exits.

Since most Sys Admins and DBAs I know (or work with) tend to be wired for optimization, the prospect of cleanly tearing down a database after users are no longer in it seems to make all sorts of logical sense.

The problem, however, is that there is minimal cost and overhead associated with not only tearing down existing connections, file-handles, and buffer allocations in order to ‘shut down’ a database when it auto-closes, but there can also be significant overhead involved in spinning a database back up when it’s accessed by subsequent applications or users.

As such, it makes no sense to allow production databases to automatically turn themselves off when active connections stop – especially if a new connection might spin up within just a few seconds (or even milliseconds) after the AutoClose procedure terminates.

Accordingly, while AutoClose may seem like it makes a lot of sense, it can actually cause performance problems – to the point where it’s among the first-things I’ll check when troubleshooting performance for clients.

Likewise, I’m also not a fan of the fact that when AutoClose is on you’ll start to see potentially gobs of SQL Server log entries to the tune of “Starting up database

That, and since many SQL Server DMVs that are useful in troubleshooting, tuning, and validating the removal of potentially non-used objects, have their data/values ‘reset’ each time a database is taken offline, there are other, ugly, side-effects that come with routinely allowing SQL Server to take databases offline.

According to Books Online:

While that may appear to contradict most of what I just said, it’s sadly misleading. Yes, SOME of the performance costs I mentioned above are now gone by means of the fact that SQL Server can more adeptly shut-down a database.

But the overhead/cost of establishing new connections still remains, AND the bigger problem is that SQL Server now has to load data back into the buffer to satisfy queries, and any queries fired against the database itself have to be re-compiled as well.

Translation: The SQL Server 2005+ ENGINE might not block/choke when doing the ‘AutoClose Shuffle’, but ALL of the performance penalties and negatives of allowing/enabling AutoClose still remain – making it a worst practice.

How Do Databases Get Set to AutoClose?

And, in the case of databases that were designed to be deployed on mobile laptops without full-blown ‘server’ capabilities, I think you COULD argue that it sort of makes sense that AutoClose might be beneficial. Only, if you’re THAT worried about reclaiming resources, you’re better off just shutting down SQL Server when it’s not in use because it already does a fantastic job of yielding resources on a heavily used box when a given database is NOT being used. (SQL Server itself is very ‘friendly’ in this same fashion and I think that with modern, non 8086 processors and RAM, SQL Server is just fine being ‘left’ running on most boxes anyhow.)

Another scenario, however, where databases may be set to AutoClose is when non-SQL Server-savvy sysadmins or DBAs are in poking around with database properties and settings, see the ‘Auto Close’ option, read about how it ‘returns resources to the server’ in Books Online, and think that turning this option on makes tons of sense. And, frankly, who could blame them – Books Online does NOT do a good enough job of warning readers that turning AutoClose on is a BAD idea on production servers.

As with all things SQL Server, it’s almost impossible to lay down blanket statements or truisms that will work for every use-case or scenario. Consequently, the point of this blog post was to point out why AutoClose for those who are inclined to think that allowing SQL Server to reclaim resources would make sense (without fully understanding the cost of what that means in practice).

However, on dev or testing servers where there may be limited resources and multiple databases or test-cases that need to be addressed, setting databases to AutoClose can make sense in some cases – as long as it’s possible to effectively define discrete periods of time where one database won’t be used while another will. That said, I regularly beat up my own test/dev databases on a VMware host and NEVER bother with setting any of my databases to AutoClose – simply because the amount of resources that will be returned to SQL Server by shutting off a single database just doesn’t merit the effort nor is it worth the risk that one of these databases might somehow make it into production with AutoClose turned on.

Similarly, I think it could be (theoretically) argued that in some very rare and very well-thought-out edge cases that turning on AutoClose on a production server/database might make sense. But for 99.99% of production databases out there, this shouldn’t even be a consideration. And, in the .01% of databases where this might even make sense to consider, I’m guessing that in 99% of those cases, AutoClose will STILL be the wrong choice. So, only in the most theoretical and perfectly considered environment would AutoClose even begin to make sense on a production database – meaning that you really don’t want to go there.

How to Detect and Correct AutoClose Databases

There are a number of ways to detect databases that are set to AutoClose – including running SELECT DATABASEPROPERTY(‘dbname’,’IsAutoShrink’) or merely right-clicking on a database in SSMS, selecting Properties, and checking on the Options tab as shown below:

Or, my favorite approach is simply to query master.sys.databases – and pull back a list of all databases that have AutoClose enabled, as follows:

Then, if you find any databases set to allow AutoClose, simply run ALTER DB as follows (or you can make the change from within SSMS if you prefer):

Making this change is super simple, completely safe, and won’t block operations, mess up backups or introduce ANY negatives. Instead, it will just cause your databases to stop running in a Worst Practice configuration.