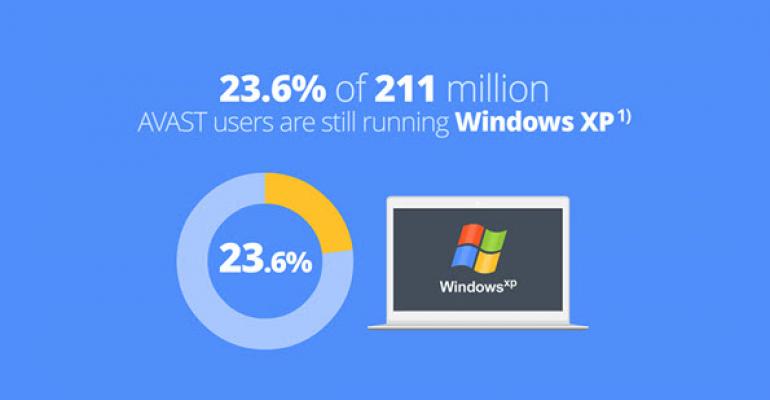 With Microsoft closing down support for Windows XP on April 8, 2014, we've seen few vendors willing to offer support for the dying operating system version beyond the cutoff date.

On Monday, Avast announced the company is making changes to the Avast! 2014 product, tailoring it for older machines still running Windows XP through improvements in performance and resource consumption. And, without giving a definite date, the company also announced that it will support Windows XP for at least the next three years. The company will provide antivirus and antimalware updates to Avast! 2014, but also continue to develop protection modules and detections to cover actual vulnerabilities and security problems.

The reasons behind this should be obvious.

For one, per the Avast announcement, the company believes Microsoft is making a mistake in ending support for the 13 year old operating system. Avast believes that support for Windows XP should not end because Microsoft has not been successful in transitioning users to newer systems. The company also believes that there are very real targeted attacks brewing. The coming attacks will hit business and home users alike, but will not affect only those systems running Windows XP.  I've stated this many times. Any computer that is Internet connected can be used to infect and attack any other computer also connected anywhere in the world. In effect, a single, unpatched Windows XP computer could potentially be used to take down the entire computing realm. And, don't forget that 95% of the world's ATMs are still running some form of Windows XP. A successful exploit could turn financial institutions into bags of free money.

Avast, of course, has a stake in the security game and does need to generate revenue. The company does offer a free Antivirus version, but also produces paid-for modules for Internet security and privacy. Obviously, the free version is not going to provide the full support that Windows XP will need. Each paid product offers a 1, 2, and 3 year subscription, ranging from around $35 per year up to $99.99 for three years. Of interest, though, Avast provides free software for Schools.

If you will be stuck using Windows XP after the cutoff date, you should start planning your security actions now. Definitely start using Chrome as an Internet browser, but also take a look at Avast as a potential AV/Malware solution. Avast's free version may not provide ultimate security, but the paid versions should. And, even at the top of the spectrum, $99.99 is a lot cheaper than the estimated $200 per PC that Microsoft is selling through extended support agreements.

And, beyond that, check out our 7 things you can do to help bolster Windows XP security.