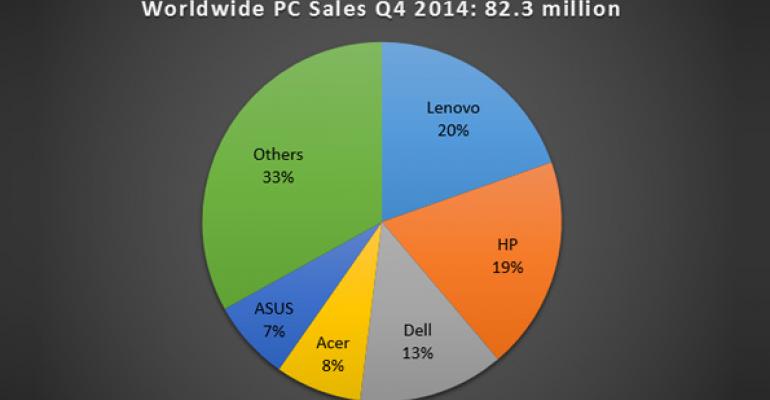 2014 was a turnaround year for the PC industry, with the years-long PC sales decline slowing and then finally reversing as the year drew to a close. And hardware makers sold over 80 million PCs in the fourth quarter of 2014, the first time all year they had hit that mark.

Note: As always, this look at PC market share averages data from both IDC and Gartner.

The top five PC makers in the world are:

Looking at the PC recovery of 2014, a few points emerge:

Mobile PCs rule. The primary driver of the Q4 surge in PC sales in particular was mobile PCs, "including regular notebooks, thin and light notebooks and 2-1s," Gartner said.

The inexpensive PC strategy is working. Low-priced notebooks—i.e. those with a $200 to $300 price point—"boosted shipments," Gartner said. IDC agreed, adding that "market progress has been fueled by low-priced systems, including growth of Chromebooks and promotion of Windows 8 with Bing"-based PCs (which are those sub-$300 devices).

Convertibles are selling. The Windows 8 angst is over, with "thin/light notebooks and two-in-ones (laptops with a detachable or bendable screen) showing strong growth," Gartner reported. "PCs are more compelling and competitive [now]," IDC maintained.

Consumers are turning back to PCs. A big reason for the sales shortfall over the past few years is that consumers, repelled by Windows 8 and seeing interesting options in smart phones, tablets and crossover devices. But consumer spending in PCs is back, in part because "tablet penetration has reached the majority of the market." IDC noted that "consumer demand is gradually coming back."

Business sales are slowing. Commensurate with consumer PC spending, business PC sales slowed (but did not decline) in 2014, IDC says.

In emerging markets, consumers are still turning to smart phones as their first personal computing device, Gartner said. "Users here are more focused on content consumption or on specific tasks where functions can be handled by a smartphone. Coupled with limited disposable income, these buyers are delaying PC purchases if they do not see the need, therefore making the consumer market more lackluster than what it used to be."