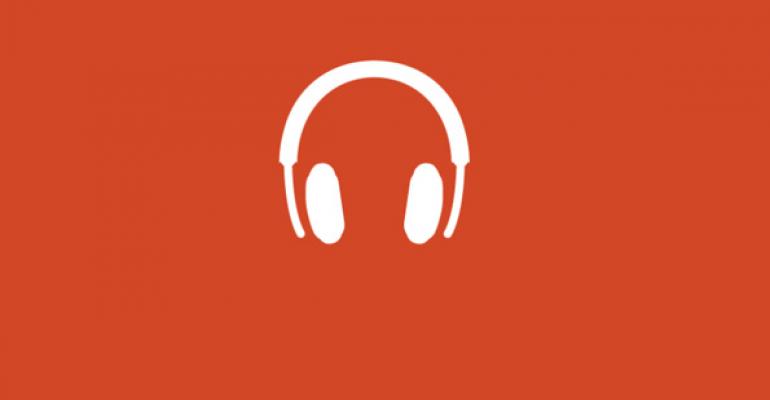 No Windows user should ignore this great service

With the release this past week of Xbox Music apps for Android and iPhone, and improvements to the web client, Microsoft's next-generation online music service has finally come of age. I've been using this service since it came to life in the wake of Zune Music, but now you have no excuse. If you're a Windows user or are otherwise heavily invested in the Microsoft ecosystem, Xbox Music is a no-brainer. But even those with iPhones and Android will soon have few excuses. Xbox Music is the real deal.

It wasn't always that way, I know. And I know I'm still going to get complaints from those who find that it can't match their entire collection to the cloud or who still prefer old-school tools like the Zune PC software. Get over it, folks. The future has arrived. And Xbox Music is finally living up to its billing as the one service that can do it all.

Cribbing from my own book, Paul Thurrott's Xbox Music—which is now in need of a major update thanks to recent changes with the service (but you can download the latest version from SkyDrive, Dropbox or Google Drive—Xbox Music offers the following services.

Free music streaming. On Windows 8 and RT devices, and on Xbox Music for web, Microsoft offers free music streaming from its catalog of 30 million-plus songs. This feature allows users to listen to individual songs or full albums for free on their Windows 8 PCs and Windows RT tablets, even if they don’t pay for an Xbox Music Pass subscription. This feature is advertising supported and is only unlimited for the first six months. After that, it is limited to 10 hours of streaming per month.

Xbox Music Store. Like rival services such as Apple iTunes, Amazon MP3 and Google Play Music, Xbox Music does of course allow you to purchase the music you want to own, in this case via the Xbox Music Store. The purchase experience works as you would expect, though those with Xbox Music Pass subscriptions may find that the need to actually buy music has essentially disappeared.

Playlists. Lists of songs that can be played together as a group, playlists are like the modern version of a mix tape, a way for to organize songs you like, or that go together well, in a cohesive, way, much like a traditional radio. Xbox Music of course support playlists on each of the supported platforms, and the playlists you create automatically sync to your cloud collection so they are available from all your devices. That latter feature is a huge benefit of Xbox Music. Note that Xbox Music does not currently support dynamic playlists. Instead, it only supports basic playlists.

Radio. Still called by its previous name Smart DJ in Windows Phone only, helps you create a special kind of dynamic playlist, called a radio station (formerly a Smart DJ mix), which is based on “seed” music and includes content from your collection and, depending on the situation, from the voluminous Xbox Music cloud-based library. Radio stations can include music from both your own collection and from your Xbox Music Store, but you need to be online for these mixes to work. If you have an Xbox Music Pass, radio stations created on each platform—Windows 8/RT, Windows Phone 8, and Xbox 360—will include music from the Xbox Music cloud-based library.

Music Match. Xbox Music lets you move your existing music collection—which you may have acquired by ripping audio CDs, purchasing digital music from other services, or other means—to your personal cloud collection. This functionality is called music match, and it works manually or automatically in Xbox Music for Windows 8/RT only. One issue is that Xbox Music can't upload your music if it doesn't exist in Xbox Music Store; I expect this feature to appear over time.

Xbox Music Pass. A monthly or annual subscription service, Xbox Music Pass lets you stream much of the music in Microsoft’s voluminous online music catalog with your Windows 8/RT PC or device, Windows Phone 8 handset, Android or iOS device, or Xbox 360. And on Windows 8/RT and Windows Phone 8, you can also download music from the service to your devices for offline use. This includes music in your own cloud collection as well as music in Xbox Music Store. Xbox Music Pass is comparable to services like Spotify Premium or Rhapsody Premier Plus in that it provides unlimited monthly streaming on compatible devices, lets you download music for offline use on a set number of devices, comes with no advertising of any kind, and integrates with other platform features that help you discover new music, like Radio. It’s also a reasonable expense for music lovers: Xbox Music Pass costs $9.99 per month, but you can sign up for a 12 month Music Pass for $99.90, which works out to just $8.35 per month, which is like getting two months free per year. (And if you’re not sure if you want Xbox Music Pass, Microsoft offers a free 30-day trial so you can see how the service works with your own devices.)

Xbox SmartGlass/Play on Xbox. Though it’s not strictly an Xbox Music feature, Microsoft provides an amazing degree of integration between the various platforms that support Xbox Music via Play on Xbox, which requires a separate mobile app called Xbox SmartGlass on Windows 8/RT and Windows Phone 8. (It’s also available on iPhone/iPad and Android.) Play on Xbox allows you to redirect the playback of music content from your PC, device, or Windows Phone 8 handset to the console, so that playback continues only on the latter. As with many Xbox Music features, it only works with content that can be found in the Xbox Music Store, and that content must be licensed for streaming. (Most of it is.) Once the music begins playing on the Xbox, you can continue to control playback, and learn more about the music you’re listening to, from your Windows 8/RT device or Windows Phone 8 handset. So in this sense, the Xbox SmartGlass lets your device function like a large and intelligent remote control.

What you can do without an Xbox Music Pass

As I wrote in Paul Thurrott's Xbox Music, the best possible Xbox Music experience can be had with an Xbox Music Pass. But if you're just getting your feet wet and want to see whether Xbox Music lives up to the hype, you can do a lot for free, especially if you're using Windows 8 or Windows RT. Here's what you get at no cost:

Windows 8/RT. Using the Xbox Music app, you can match your own music collection to the cloud and create your cloud collection ... for free. This includes albums, playlists, and radio stations. You can also access Xbox Music Store and buy music, which is also added to your collection (and downloaded to your PC). You also get free, unlimited streaming of all Xbox Music Store content for 6 months and then 10 hours of streaming after that.

Web. With Xbox Music for web, you can access your cloud collection, including all matched albums and songs, and your playlists. (Radio is coming soon.) You also get free, unlimited streaming of all Xbox Music Store content for 6 months and then 10 hours of streaming after that.

Windows Phone 8. While you cannot access your cloud collection on Windows Phone, you can sync that content to the phone using the Windows Phone mobile or desktop app (your choice).

What you can do with an Xbox Music Pass

Add an Xbox Music Pass, and you get the full meal deal. This includes:

Windows 8/RT. Free music streaming is now unlimited for the lifetime of the subscription. And you can add music from Xbox Music Store to your collection, or download it to your PC.

Windows Phone 8. Now you can access your cloud collection automatically, including all albums, songs, and playlists (but not radio stations). You can download or add music to your collection.

Xbox. You can now access your cloud collection and playlists from the console and create Xbox 360-specific radio stations. You can stream (but not download) any music in Xbox Music Store. Xbox 360 access is streaming-only and also requires an Xbox Live Gold subscription.

Xbox Music still has some holes, yes, though I expect all the wrinkles to be ironed out by year-end. Regardless, it really does live up to its billing as the only all-in-one music service. It's what I use, and prefer, and what I recommend. All Windows users should at least evaluate this service, and even the free (non-Music Pass version) is pretty amazing. At the very least, get your collection matched to the cloud—for free—and see how it goes.