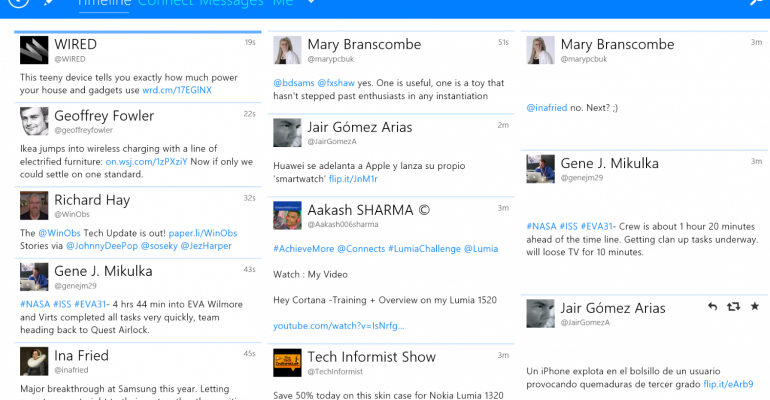 This week I want to highlight another Universal App that is available on Windows and Windows Phone called Tweetium for Windows.

I suspect many of you will already know about Tweetium but I wanted to highlight it for a couple of reasons.

First, it is the tool I use to interact with Twitter across all of my platforms.  It is truly a Universal App in that it is pay once and use on all devices plus settings sync across your different installs as well.

Second, it was the first third party Twitter app to come up with a creative way to work within the user constraints Twitter places on them. This method will insure its development continues when Tweetium comes up against the 100,000 user token limit placed on third party apps by Twitter.

More on that later though.

Let’s get started with a look at Tweetium for Windows.

As a Universal App available through the Windows and Windows Phone app stores you pay $2.99 once and have access to the app on your phone, desktop and tablets.

Using a common code base you can see as new features or tweaks are introduced in one version of Tweetium those same features make their way to the other platforms in a very short period of time.  Although Tweetium for Windows Phone has unique enhancements for a touch only device the functionality of the app is similar across all platforms.  For me – that is a true hallmark of a Universal App – and something Microsoft showed off about Universal Apps during the big Windows 10 consumer event back in January.

The Tweetium for Windows apps are also one of the most actively maintained of any I have ever seen.

The developer, Brandon Paddock of B-side Software , is always interacting with users and taking onboard feedback and issues to keep the product innovative and moving ahead.  There have been over 50 updates since the software was released in December of 2013 including two major version releases.

Now – time to circle back to the innovative way Brandon is working to insure that Tweetium for Windows will continue if it hits the dreaded Twitter user token limit.

There are already numerous Twitter apps that are no longer being developed across all of the mobile platforms because they hit that token limit and their source of revenue (new users) dried up. Some of the more popular ones were Tweetro (Windows Phone), Falcon (Android) and Tweetbot (iOS).

Brandon decided early on that he would offer a universal pro subscription and bring extra features to those subscribers with the primary reason being related to the fact those features require extra cost to deliver but it also means he is diversifying the apps income stream by not being tied purely to new users which proved to be the demise of the popular Twitter apps I mentioned earlier.

Of course, in our current environment where so many people expect things for free, especially in the app world, I have seen folks protest against Brandon using a pro subscription like this but there is a reality to be understood here. For independent developers like Brandon and so many others this is their lively hood. If they put in all of these hours of work and do not get compensated for it then good developers are not going to spend their time producing quality apps.

Big companies can afford to pay a team of developers to produce apps for them and offer those apps at no cost. Unfortunately, this is part of the problem with a perception that apps should be free in all circumstances.

I am a fan of paying developers for their efforts that result in great app experiences and in my opinion Tweetium for Windows is one of those well worth the initial purchase price and the pro subscription.