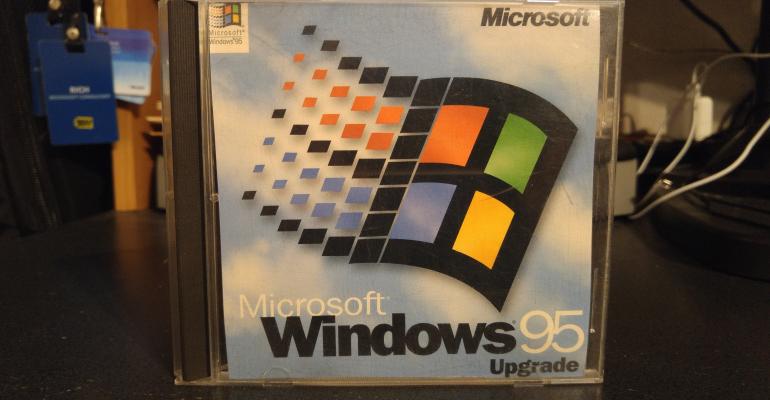 Windows 95 started up 20 years ago today

24 August 1995: Do you remember where you were when Windows 95 was released into retail channels for General Availability?

I was stationed overseas in Italy with the U. S. Navy in 1995 but I just happened to be back in the states for a two-week training class. In the early evening of 23 August I found myself lined up outside of a local electronics retailer waiting for midnight on the 24th to arrive. My goal was to get my own copy of Windows 95 in retail packaging to take back home to Italy where I had a beige box IBM compatible machine waiting for the upgrade.

I remember being very concerned about whether or not the retailer would have enough copies of Windows 95 because the line was massive and went all the way down the strip mall and around the corner when I showed up. My concerns were unfounded when I walked into the store and found shelves filled from top to bottom with boxed copies of Windows 95.

Of course, 20 years ago there were no options for electronic purchasing and downloads of the new operating system so the only way to get a copy was to purchase it in a physical store.

The timing was perfect for me to get my copy because I would have been waiting for a few more weeks if I had not been back in the US for training from Italy. Back then the delivery chain to get new products into our overseas military stores were horrendously slow so by grabbing my retail copy I was actually one of the first in our military community to have it as well. I provided lots of Windows 95 demos for those first few weeks once I returned.

I still have that Windows 95 upgrade disc on a shelf above my work station here at home.

According to Windows sales numbers collated by Harry McCracken, Windows 95 sold 40 million copies in its first year of availability making it, up until that time, the largest selling version of Windows ever. It exceeded the first year sales of Windows 3.0 by 10 times.

Windows 95 was the initial introduction of the Start Menu, Taskbar and long files names among many innovative features. Many believe Internet Explorer 1.0 was released with Windows 95 but it actually arrived later in the Microsoft Plus! for Windows 95 add-on.

It is interesting that 20 years later the Start Menu continues to be a central focal point in the latest operating system from Microsoft - Windows 10 – which was released almost a month ago as a free upgrade for Windows 7 and 8.1 users. Windows 10 has also introduced the first new web browser, Microsoft Edge, since the initial release of Internet Explorer twenty years ago. A lot of things coming full circle twenty years after the ground breaking release of Windows 95.

So were you around for the release of Windows 95 and did you wait in line for your copy as well?

Please share your own Windows 95 experience in the comments below and I will randomly select one of them to receive a Ninja Cat Riding on a Fire Breathing Unicorn sticker.

But, wait...there's probably more so be sure to follow me on Twitter and Google+.
4 comments
Hide comments
Recommended Reading