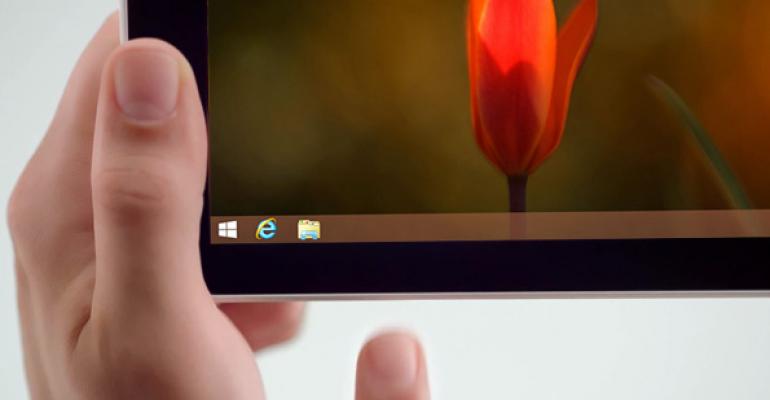 A newly leaked build of Windows 8.1 shows a few interesting fit and finish changes to the coming update for Windows 8 and RT. But the biggest change, I think, is that the firm is finally abandoning one of the key differences between the Windows 8/RT user experience and that of Windows Phone 8. And by finally adopting a key user interface element found in that latter, more mature mobile product, Microsoft is doing the right thing.

I’ve been complaining for some time that the Windows team basically took the “Metro” design elements first used by the Windows Phone team and then ran off and did its own thing rather than making sure that the two platforms were as identical as possible from a user experience standpoint.

The weird differences between the Metro design in Windows 8/RT and Windows Phone 8 can be seen everywhere, in ways that are both profound and subtle. In Windows Phone 8, for example, Start screen tiles use a standard (and user configurable) color theme, whereas app makers hard code whatever color they wish to use on their Windows 8/RT tiles.

One could make a very long list of these kinds of differences, but from a fundamental standpoint, the thing that has bothered me the most is that, by going its own way with Metro, the Windows team has explicitly decided not to learn from three years of UI blunders that occurred first--and were then fixed first--on Windows Phone.

Two of the biggest ones were search and command discoverability.

On the search front, the original version of Windows Phone (7.0) used the hardware Search button contextually. So if you were in Mail and pressed Search, it would search your email. If you were on the Start screen, the Bing experience would load. This just confused users, so Microsoft build software search functionality into each app instead. And now the hardware Search button just loads Bing, no matter what you’re doing. Some still prefer the old way, I know, but the user feedback was overwhelming and obvious. And now it works more consistently. But when Microsoft created Metro for Windows 8/RT, it made exactly the same mistake: The Search charm was contextual in the initial release. So in Windows 8.1, they’re fixing it so that every built-in app has a software search feature that is both visible (you can actually see it and thus discover it, unlike the Search charm) and specific to what you are doing right then.

The second one seems more subtle but is I think even more important. In a bid to maximize on-screen real estate--which makes sense given the relatively small screen sizes with smart phones--Microsoft created a special app bar button called More (it looks like three dots, like “...”) that, when tapped, displays a pop-up menu that can display many more commands. But this item requires a visible app bar, which takes up space on screen, so Microsoft also allowed users to access these commands by tapping and holding on an item on-screen (sort of a touch-based way to do a right-click). The trouble is that few people knew to do this, so Microsoft made a special kind of app bar that has no buttons other than that More button. This app bar type is much smaller than a standard app bar and in Windows Phone 8, it was added in many places, such as in the Photos hub as shown at the bottom of this shot:

In Windows 8, Microsoft ignored this learning and insisted that every app could use every single pixel on-screen. This means that apps that needs lots of UI chrome--especially productivity apps like Mail or Calendar--require users to really understand how to find hidden UI elements: App bars, you see, are completely hidden in Windows 8. You have to right-click (or swipe up from the bottom of the screen, or down from the top) to display them. When you do this, you often see tons of commands.

Now, in Windows 8.1, Microsoft is finally (sort of) fixing another problem that Windows Phone fixed long ago: Apps can now alert users to the availability of more commands, and they can display a “More”-type mini app bar just Windows Phone 8.

Screenshot from The Verge. You can see more shots of the leaked build there as well.

Frankly, unless and until these apps let you just turn on and leave on a real app bar, it won’t be ideal. But it’s certainly better than the alternative. If the Windows team had been more open to creating common user experiences across platforms--i.e. was open to communicating--this and other similar issues could have been avoided. But it’s nice to see they’re finally listening: I’ve been complaining about this for a long time, and I’m sure others have as well.

More on the leaked build soon.