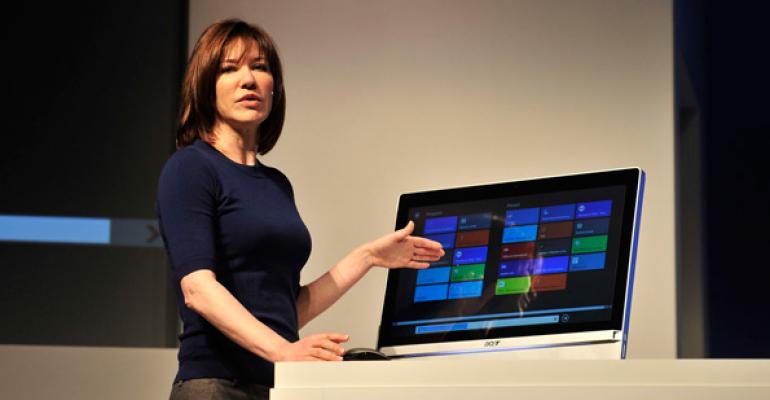 The other half of the Windows brain trust speaks about "Blue"

As expected, Microsoft will issue a public preview of Windows 8.1 “Blue” in late June at its annual BUILD developer conference, giving enthusiasts and other users an early peek at the coming update to Windows 8. But you won’t have to wait that long for more Blue news: Microsoft plans a reveal event within a few weeks too.

These developments come courtesy of remarks made by the enigmatic Julie Larson-Green, who co-leads the Windows Division at Microsoft currently with Tami Reller. Larson-Green and Reller replace the departed Steven Sinofsky, who might rightfully be blamed for getting us in this mess in the first place.

Larson-Green appeared this week at the 2013 WIRED Business Conference. And while I’m still waiting on a transcript or video of the appearance so I can really analyze what she said, my Windows Weekly co-host Mary Jo Foley has a few details.

For starters: Microsoft will make available to anyone who has Windows 8 a preview of Windows Blue in June.

The BUILD-timed public preview is no surprise: Our sources had long ago pinned the public preview to this date. But in the sense that confirmation is always nice, there you go: It’s confirmed.

Foley reports that Larson-Green came pretty close to admitting that the Start button is coming back to Windows 8.1 as well. “The Start Button might be helpful,” she acknowledged, noting that it would provide some users with more of a “comfort level.” Larson said her team has had “meaningful discussions” about the Start Button but will not be bringing back the old Start menu.

But what about that coming reveal event?

Both Tami Reller—see Tami Reller Talks Windows 8.1 "Blue"—and Larson-Green have now said this week that Microsoft plans to reveal “pricing, packaging and go-to-market details” about Windows 8.1 “Blue” within a few weeks and not wait until Microsoft’s June events, TechEd North America and BUILD. With three weeks left in May, that could happen at any time. But I’d remind readers that Microsoft is holding a special reveal event for a related product, the next Xbox, on May 21 at its Redmond campus. And give that I exclusively revealed that the next Xbox will be based on Windows 8 (8.1?), it’s not unreasonable to think that the Xbox event would be the ideal time for Microsoft to talk up Windows 8.1 as well.

We’ll see. And to be clear, that’s just speculation on my part, and Microsoft could choose any day this month to come clean on Blue.