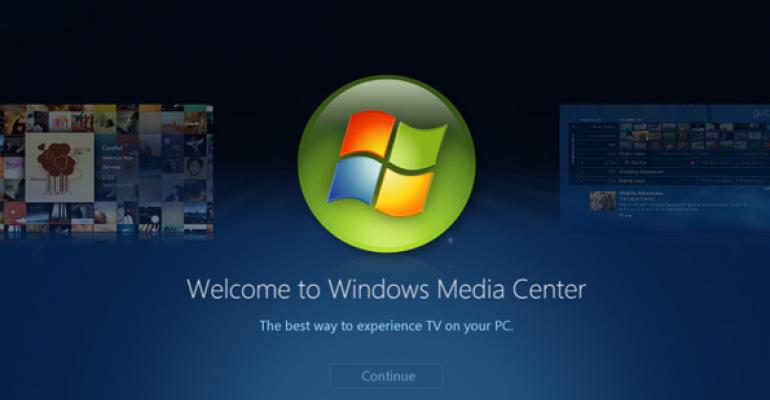 When Microsoft announced that it was removing Windows Media Center from Windows 8 and making it available as a paid add-on, enthusiasts howled. But in a rare if temporary mea culpa, Microsoft is now making Media Center available for free to anyone with Windows 8 Pro. But you need to act fast: This special offer is available only for a limited time.

It’s also only available for free to Windows 8 Pro users. Those with the base version of Windows 8 will need to pay for something called the Windows 8 Pro Pack, as you’ll see.

Adding Media Center is one way to get this playback functionality back, though you will only be able to use Media Center (and not other applications) to play DVDs. Another is to purchase a third party DVD player application. Most new PCs will come with such an application.

In any event, it’s free. So even if you don’t think you’ll ever want or use Media Center, there’s no harm in grabbing the free product key now. You can always use it later.

Normally, you would find and install such additional features, called Feature Packs, through the Add features to Windows 8 control panel. For example, Windows 8 Core users can use this interface to purchase the Windows 8 Pro Pack, a $69.99 offer which includes an in-place upgrade to Windows 8 Pro as well as Media Center.

If you access this interface from Windows 8 Pro, you will be offered the Windows 8 Media Center Pack, which costs $9.99.

Don’t do this. Instead, navigate to the Feature packs page on the Windows web site. Here, you’ll see the offer to get Media Center for free. (Again, you must have Windows 8 Pro to use this offer.) Just enter your email address and enter the captcha to trigger an email from Microsoft with the product key you’ll need.

Microsoft will send the product key via email within 72 hours. That email includes the 25-character product key you need to install Media Center.

Important: Before actually installing Media Center, be sure to save and close all open documents and close all running applications. This process requires a PC reboot and that reboot will happen without warning and without a chance to delay it.

Once you’re ready, run the Add features to Windows 8 control panel that was mentioned above. In the application window that appears, choose “I already have a product key”.

Then, type in (or better, yet copy and paste) the product key from the email. The wizard will check to see whether the key is valid and then note that you can continue.

Click Next to continue and install Windows Media Center after accepting the license terms. The install process should take about 5 minutes and will reboot the PC.

When the PC reboots and you return to the desktop, you’ll see that the wizard is complete.

Now you can run Windows Media Center, which works nearly identically to the way it did in Windows 7.