/sites/all/themes/penton_subtheme_itprotoday/images/logos/footer.png
Recent
Recent
A Beginner's Guide to GitHub: What You Need To Know
Dec 02, 2022
IT Security Professionals Tell the Pros and Cons of Their Jobs
Dec 02, 2022
Systemic Risk Threatens Every Organization
Dec 02, 2022
All I Want For Christmas Is an Accessibility Expert
Dec 02, 2022
Featured
5 Multi-cloud Security Challenges You Can Avoid
Nov 14, 2022
Windows 11 Migration Guide: 4 Best Practices When Upgrading
Oct 21, 2022
Report: Disaster Recovery and Business Continuity In Action
Oct 19, 2022
Do Programmers Still Need to Have Linux Skills?
Oct 18, 2022 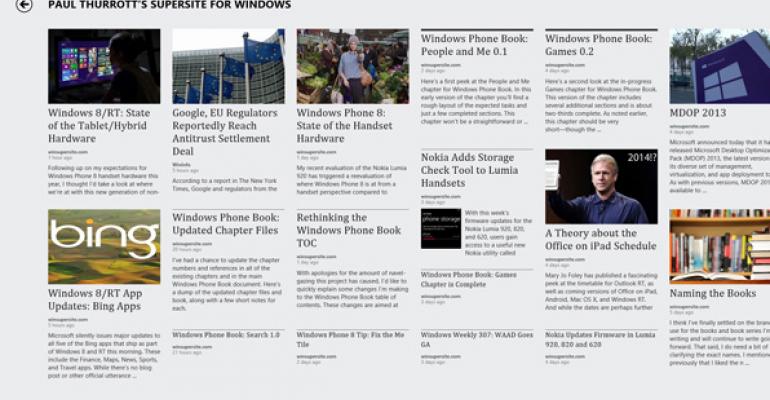 Not quite a Google Reader replacement, but getting there

Thanks to a recent update to the Bing News app, Windows 8 now includes a native RSS client. And while the News app isn’t currently a perfect replacement for Google Reader, which is being retired this summer, it is suddenly a viable option, one that syncs your feeds across multiple PCs.

Google announced last month that it was killing off its RSS reader, Google Reader, this year. This is a tool I use daily, so I’ve been looking for a replacement. Since the service isn’t disappearing until July 1, there’s still plenty of time. But what I’ve been looking for is something that syncs my feeds to the cloud and works well with both Windows and Windows Phone.

To be clear, the News app isn’t that solution, at least not yet. (There’s no version of Bing News for Windows Phone, though I’d like to throw my support behind such a project.) But with this latest release, the News app does pick up two very interesting and related capabilities:

RSS support. You can now arbitrarily subscribe to any RSS feed.

Sync. Many News settings, including which RSS feeds you’re subscribed to, are synced through your Microsoft account. So you can sign into the Mail app on a second PC or Windows RT device and your feeds will carry over. (This process has been slow for me so far, but yes, it does work.)

When you update the News app to the latest version, you’ll see a new group called Get Started that highlights a few new features.

You can tap the Add a source news link in this group or just right-click anywhere in the app and choose Sources from the top app bar.

Either way, you’ll get to the Browse Our Sources screen. From here, you can add and remove the built-in sources, but you can also paste in the URL for any RSS feed.

To add an RSS feed to the sources used by News, just copy it from the site and paste it in here. When you tap Enter, the feed should appear in a tile. Tap/click the Add (“+”) button to add that feed to your sources.

Continue adding more RSS feeds as needed. Going forward, you can customize News further by adding and removing news groups (topics). And you can view your subscribed RSS feeds in the Sources group.

If you have multiple Windows 8/RT PCs and devices, you’ll find that News syncs these RSS feeds between each device as well.

If we lucky, Microsoft will one day port Bing News and the other Bing apps to Windows Phone 8, and provide cross-device sync capabilities to handsets as well. But for now, this isn’t too shabby.