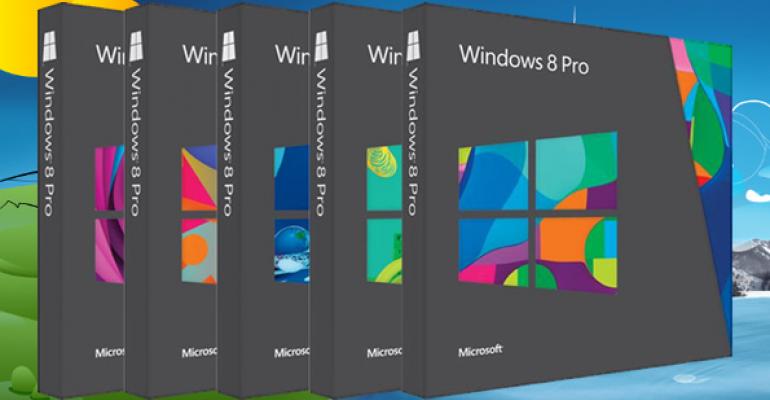 For when the web installer simply isn't what you're looking for

While a lot of attention has been paid to Windows 8’s web-based installer, Microsoft is still offering a traditional retail Upgrade package as well. And depending on your needs, this isn’t a bad option.

Plus, it comes in a fun new box.

Or, more precisely, four of them: Microsoft is offering the Windows 8 Pro Upgrade in five different retail package versions, each with its own unique design.

Box beauty aside, each contains a welcome card, separate (and nicely labeled) 32-bit and 64-bit Setup discs and a card containing your product key.

So why pay $69.99 for the Windows 8 Pro Upgrade retail package when you can get the product electronically via the web installer for just $39.99 (through the end of January)? There are a few reasons.

Second, while it’s not terrifically hard to use the web installer to download the Setup ISO and then burn it to disc (or create a USB-based installer), those who need or want to install Windows by booting their PC from Setup media will find that it’s quicker and easier to just get the retail package. $30 easier? That’s up to you.

(For the record, I do think the web installer makes more sense for most people, since it comes with some additional features, including an Upgrade Advisor. I will be writing a Feature Focus article about the web installer soon.)

Note that Microsoft does not make the basic version of Windows 8, called Windows 8 Core, available at retail in Upgrade form. You can only obtain this software via a new PC purchase or by getting a more expensive System Builder (formerly called OEM) version. Windows 8 Core is $99.99 at NewEgg.com, for example.

Likewise, Microsoft is not offering a Full retail package for Windows 8 Pro, either: That product has been replaced by a System Builder (formerly OEM) version, which is $139.99 at NewEgg.com.