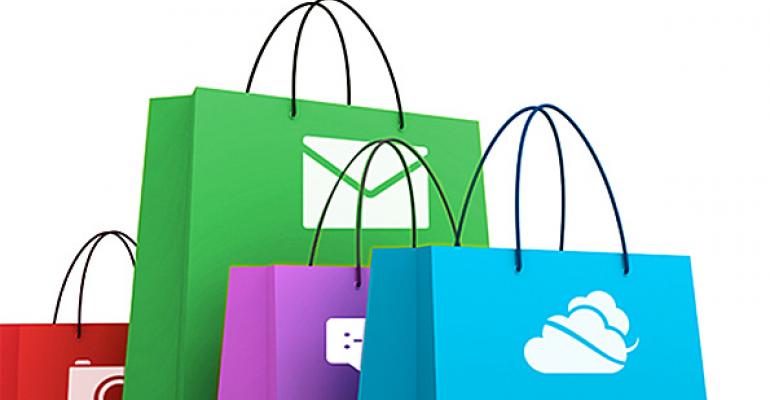 Note: This article is an updated version of a previous article that reflects the final, shipping version of Windows 8.

As you may recall, even Apple originally opened its own app store under duress—the company's original goal was to keep the iPhone a closed system--but once it did so, it did it right: The App Store for iPhone and iPad is now the model on which all other app stores are based. More important, perhaps, it's inconceivable that any company could launch a new computing platform without an app store and other supporting services. And in Windows 8, that app store is called Windows Store.

Like Apple’s App Store, Windows Store is a mobile app store, one through which you can purchase apps based on the Windows Design Language (WDL), previously codenamed Metro. (Windows Store also provides links to select desktop applications, but those applications are not sold or download through the store.)

These mobile apps improve the Windows 8 (and RT) platform by providing additional capabilities. So while legacy Windows desktop applications like Office and Photoshop made (and still make) Windows more valuable, too, these new mobile apps can also step in to make Windows more useful thanks to new extensibility features. For example, an app can extend the Windows 8 file picker with support for a new online service, providing Windows 8—and any app that runs within it—with access to new capabilities related to that service. So while we see plenty of standalone apps on Windows 8, as we do with various mobile platforms, there are also apps that do much more than that.

Regardless of the capabilities, all WDL apps that you will install on Windows 8 will come through the Windows Store: Microsoft is not allowing users to install apps from other sources, such as the web, so that it can ensure that Metro-style apps are reliable, secure, perform well, and do what they say they will. (There is one exception to this rule: Enterprises are able to “side load” their own apps in controlled environments.) And while a long list of all the relevant rules for WDL-style apps would be a more appropriate topic for, say, a book, several do stand out:

App types. Windows Store supports free, paid, and trial versions of paid apps. Trial versions can be time- or functionality-limited but must provide a reasonable approximation of the full app.

In-app purchases. Apps can provide in-app purchases, which are optional paid features, as well as advertising that conforms to Microsoft's standards. Apps cannot simply be ads, and they cannot be a shell to a web site.

Multi-device licensing. Apps purchased from Windows Store must be licensed to run on 5 PCs and devices that are tied to a single Microsoft account.

One tile only. If you've installed Office or Visual Studio on Windows 8, you know that many legacy desktop applications spew shortcuts all over your Start screen. WDL apps can install just one tile. Period.

Navigation is mostly obvious, with browser-like controls, an Explorer-like breadcrumb functionality for sub-screens, and so on. Windows Store logically arranges apps into several categories (Games, Social, Entertainment, and so on), most of which are further divided into sub-categories; for example, the Games category includes subcategories such as Action, Adventure, Arcade, and many others.

Windows Store supports a few major types of landing screens: Category, List, and App, and each provides a unique view where you find out more information or, in the case of the first two, further filter the view. A List landing page, for example, is curated by Microsoft and designed to highlight or showcase certain types of apps. Top Free and New Releases are examples of the List type.

An app landing page provides information about an individual app, including Install, Buy, and/or Try buttons and a Details page with system requirements, release notes, supported platforms (x86, x64, ARM), and other information.

Microsoft has designed Windows Store to be quite interactive. You can rate and review apps you've downloaded, mark reviews that are helpful or unhelpful, and report reviews.

Beyond these views, there are a few more navigational skills you should be aware of. A normally hidden app bar provides simple ways to return to the Windows Store home screen and your own list of purchased and downloaded apps.

And the system-wide Search functionality—available through Charms or via the WINKEY + Q shortcut—is used to search for specific items.

Windows Store also extends to the web in interesting ways. Developers can republish a Windows Store-looking version of their app listing on their own sites or otherwise link to their apps in the store so that users who click the link from Windows 8 will navigate directly to their app's landing page. This means that users can use search engines like Google or Bing to find apps. And as an added bonus, app developers can add a special menu item to the Tools app bar button in Internet Explorer 10, which will let users download or run the corresponding app.

Windows Store also handles all app updating. You will receive tile-based an in-store alerts when updates are available.

You can also manually check for apps via Windows Store Settings if you disable the default behavior, which is to download updates in the background and then prompt the user to install.

Oddly, you cannot uninstall apps from Windows Store. That happens from the Start screen, All Apps, or App Search views: Just select the app then click Uninstall from the app bar that appears.

With a quickly growing selection of apps, the only major issue with Windows Store is that its overly-simple UI is being quickly overrun by the volume of content it must display. Perhaps Microsoft will address this issue in an interim update in the coming year.

You can learn more about Windows Store in Windows 8 Secrets by Paul Thurrott and Rafael Rivera.