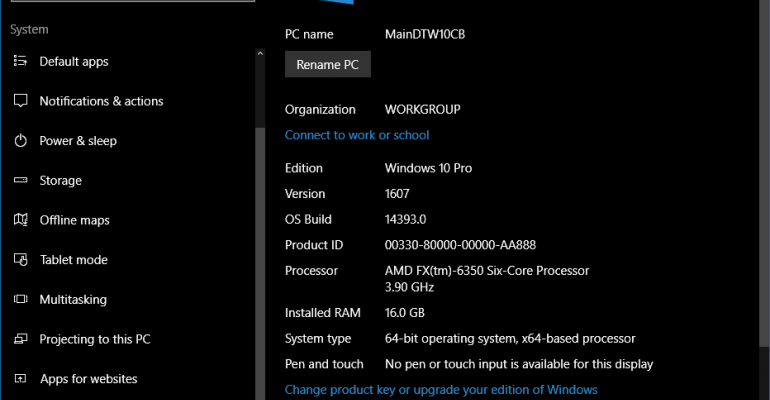 Windows 10 At One Year: A Look at Windows As A Service

One week from today, July 29, Microsoft will mark the one year anniversary of Windows 10 by ending the free upgrade program that has been in effect for Windows 7 and 8.1 users for the last 12 months. The end of the 12 month free upgrade offer means that the Get Windows 10 app which Microsoft has used to deliver the scheduling and upgrade of the OS will also be removed from Windows 7/8.1 systems around the world.

Of course my tongue is firmly embedded in my cheek with the above statement because, as many of you know, Microsoft has been on the hot seat quite a bit this past year concerning their aggressive push to get users upgraded to Windows 10. If you're so inclined, it's easy to focus on stories about in-your-face upgrade prompts, claims of automatic upgrades and the privacy FUD that has been generated over this past year.

Look instead at the innovations that surround the deployment and development of Windows 10.

Windows as a Service (WaaS) was a phrase that was foreign to many of us prior to Windows 10 and even today many users of the year old operating system do not fully understand what WaaS means when it comes to the updates and development for the OS. Put simply

Before the days of WaaS, those security updates would be pushed out monthly as necessary but only serious bugs and performance issues would be addressed out of cycle. Microsoft now patches those items as they come up and need to be addressed. No more waiting for a Service Pack to arrive a year later.

With WaaS, the initial release of Windows 10, Version 1507, has received six cumulative updates in the past year to address security, bugs and system performance. Version 1511 has received seven cumulative updates since it was released last November. These updates are delivered on a regular schedule, typically on each month’s Patch Tuesday, and account for a total of 13 system updates for the released versions of Windows 10 over the last 12 months.

The other aspect of Windows 10 that has changed under WaaS: First party apps in the operating system (such as Mail, Calendar, Groove Music, Movies & TV) can be updated at anytime and are not tied to OS related updates. That means Microsoft is not only able to deliver bug fixes and performance improvements, but they can now ship new features with an app update pushed out through the Windows Store.

This first year of Windows 10 has completely changed the perception of the operating system as a product and the way it is updated and shipped. Whether you are ready for it or not, it is the reality of our Windows based existence and the Redmond company has really found the sweet spot in delivering it to end users.

Another process that has significantly changed Windows 10 itself is the development cycle and how Microsoft approaches the gathering of feedback and issuing testing builds of future major OS updates.

The Windows Insider Program was created back in late 2014 to get new OS builds out early and often, so that telemetry plus user feedback could be collected on system performance to then improve the overall experience in Windows 10. The Insider Program is also a channel for testers to give feedback relating to OS features, first party apps and even suggestions for new features.

The key element of the Insider program is to get those testing builds out to users so that feedback can be received and collated to make those critical OS related decisions and fix the issues that crop up.

The push to get new testing builds out to Insiders has changed a lot in the last year since Windows 10 was released last July as well.

Just to give you an idea of how much faster the Windows team is pushing testing builds out to Insiders check out these numbers.

NOTE: These are only looking at the PC/Desktop builds of Windows 10 and not Mobile versions.

There were a total of 14 builds released over a nine month period leading up to the initial release of Windows 10 on 29 July 2015.

That is an average of 1.5 builds per month.

There were 6 builds released over a three month period leading up to the release of the November Update, the first major update for Windows 10 which was released on 12 Nov 2015.

That is an average of two builds per month for testing the November Update.

Although we do not yet know the final build for the Windows 10 Anniversary Update that will be released on 02 August, we can still look at the numbers up until today for the builds that have been released for testing.

Since December of 2014 there have been 27 builds released for Insider testing over the last seven months.

That is an average of 3.85 builds per month – basically double the previous cycle of update testing for the November Update.

So why the big jump in builds to Insiders in this last upgrade testing cycle?

I think the primary reason is that the tooling to produce these builds has been tweaked, and is now a well established process to push those builds out to Insiders. Early on in the program it was an entirely new process and so those tools and procedures had to be developed and refined.

As we have seen over the last seven months the Windows machine can now push these builds out at a steady pace and even to the point where a Windows engineer has been documented to remark that Insiders are getting builds before many inside of Microsoft see them.

A change in leadership always refreshes a program as well, so when Dona Sarkar took over from Gabe Aul on the first of June she brought her own personality and goals for the Windows Insider Program.

To see how the pace has changed with the shift in leadership you just have to look at the testing builds (PC) released by each of them for the upcoming Anniversary Update.

Gabe, since December 2014, oversaw the release of 15 builds in a five-month period or an average of 3 builds per month. On the other hand, since Dona has taken over on 01 June, she has pushed out 12 testing builds to Insiders – an average of 6 builds a month. That is a pretty amazing bump in what Insiders are seeing and testing.

I have been on these Windows 10 Anniversary Update builds since back in December and with 27 total builds released to test the PC version of the update there has been a lot of feedback and telemetry collected by Microsoft for this second major update for Windows 10.

I once said that the more builds that get released to testers, means more feedback & telemetry to the Windows team and that means a better public release of the Windows 10 Anniversary Update.

Is it perfect? No, of course not and it still has bugs and quirks however, it is an extremely stable build of Windows 10 and under the Windows as a Service process can be updated and tweaked as we move forward just like its predecessors Windows 10 Version 1507 and 1511 have been since their release.

So, where do we go from here?

Well, the next major update of Windows 10 is currently known by its code name - Redstone 2. We should expect the first testing builds for the next major update of Windows 10 just a few weeks after they ship the Anniversary Update next month and something tells me the pace of those releases to Insiders is going to make a lot of folks excited to be involved. There is still not a clear roadmap of what new features we might see in the third major update to Windows 10 but as testing begins those things should start to become much clearer.

In conclusion, this first year with Windows 10 has been unprecedented in many ways from record setting adoption rates to how it is being built using the input of millions of enthusiasts around the world. It has been a fun and, at times, demanding ride but as the process continues to be refined it will smooth out and the bumps will seem less like mountains and more like ant hills.

Be sure to check out all of our Windows 10 Anniversary Update Coverage.