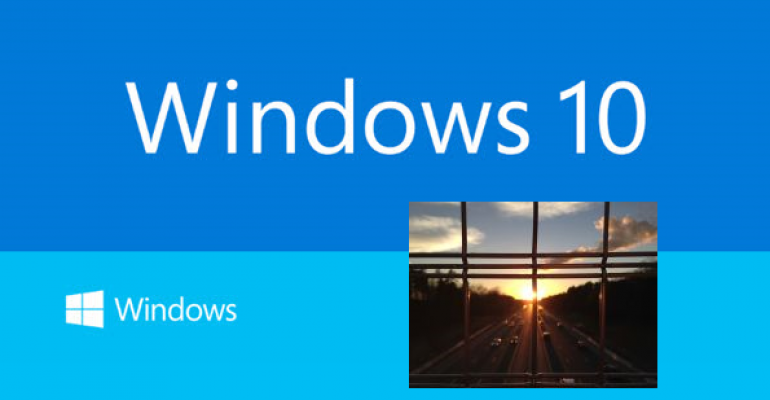 We have now had the latest build of the Windows 10 Technical Preview for more than 10 days and, like many of you, I have been putting it through its paces. I have installed it on a couple of machines plus in a few virtual machines using Hyper-V in Windows 8.1.

I am happy to report that none of these installs have gone awry and everything related to my hardware seems to run just fine.

The Windows 10 Technical Preview gives us an opportunity to see Windows at a stage of development the public has never really seen before however, there are pros and cons to seeing things this early as well.

Amongst the pros is being able to see and understand the development process of the full Windows operating system and how feedback is collected, triaged and then placed into action.  Another one is the fact that the Windows Insiders have a voice in that feedback process and those voices are not just about finding bugs but also providing input to improve the user experience.

As we learned over the last several days the group of Insiders has grown to over 2.2 million and have provided over 800,000 pieces of feedback about Windows 10 so not only is it a large group - it is also a very vocal group.

On the other side of the coin there are cons to being involved in these early stages of Windows development and that is the risk that some piece of software or part of your work process is disrupted by the changes being made to the user experience such as the removal of the Charms Bar.  Also, the risk of data loss is real which is why a real effort is made to remind Insiders about not using this software on a production system.

However, when you give over 2.2 million geeks and curiosity seekers access to the next version of Windows with the simple act of signing up with a Microsoft account those and other cons are not going to slow them down.

Over the last few years I have developed a work-flow that uses modern apps and other tools to share information and curate content. I share that information to services like Buffer to queue up items to be shared over my Twitter feed and I also send items to OneNote that will eventually get turned into my weekly show notes for the Observed Tech PODCAST.  All of these process depend on the tools that were placed in Windows 8/8.1 such as the Charms Bar and Modern IE.

So for me muscle memory is well developed to move my mouse to certain spots on the screen to accomplish those sharing and curation steps.

All of last week I decided to jump into build 9926 of Windows 10 and see just how the current changes would impact my own user experience and work flow.  That means I would use Windows 10 on my main desktop where it is installed in a dual boot and do my normal daily work routine just to test the level of disruption.

After five days I was surprised at how little my work flow was really affected.  My biggest concerns, the removal of the Charms Bar and Modern IE, did not really make an impact and I was able to shift my sharing process to focus more on using the Nextgen Reader Modern app to share to more locations than I had previously. Every once in a while I caught myself going to familiar locations to do things like shutting the system down (this is now on the new Start Menu on the left instead of over on the right in the Charms Bar) and my mouse would find its way into the upper and lower right corners trying to active the Charms Bar. That is what muscle memory is all about and I have no doubt that will get retrained over time once we have the final UI.

Of course, the system has some bugginess which is normal and expected at this stage so those things you just accept in the course of trying out early software.

So after five full days of working in this new environment I am no longer as concerned about the loss of my old allies the Charm Bar and Modern IE. I also know there are more updates to come that will hopefully continue to improve the overall flow and stability of the system.

How about you – what has changed the most for you in the Windows 10 Technical Preview and how you use Windows?

By the way, be sure to keep up with all of the SuperSite’s coverage of Windows 10.