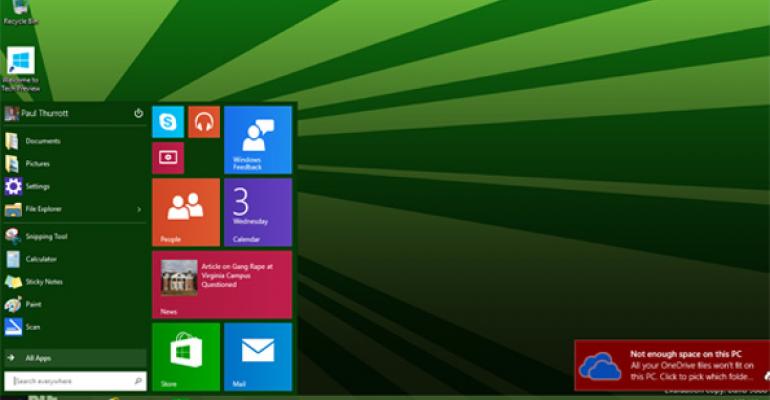 Here's what's new, it's not much

It's always exciting when a build of a pre-release version of Windows leaks out of Redmond. And so it is with Windows 10 build 9888, a post-Windows Technical Preview build of Microsoft's next desktop OS. Cautiously installing it in a virtual machine—yeah, I'm still a bit burned by build 9879—what I see, unfortunately, is not a heck of a lot of difference. This is no Consumer Preview build.

Given that lowering of expectations, what is new?

First of all, the version number is indeed 10, as previously reported. In the final Windows Technical Preview build, 9879, this version number is reported as 6.4, which is consistent with all Windows versions dating back to Windows NT 3.1 (which was the original release, in 1993).

The basic UI doesn't appear to have changed, and there aren't any obvious new icons or obvious eye-candy. But if you launch PC Settings, you'll see that some changes are underway. The Search icon has been replaced by a more obvious search box in the left pane, and a new organizational scheme with a System entry up top that appears to offer more Control Panel-type functions.

Honestly, that's about it.

I've seen other reports about consistent context menus, but nothing has actually changed there between build 9879 and 9888, so I'm not sure what that was about, and if you click on the user name or power button in the Start menu, you get the same inconsistent Modern-style menu we saw previously.

There's also been some talk about new window animations, in particular on maximize and restore, but I don't see these either. That may be because it's in a virtual machine, but I don't consider this kind of addition particularly compelling regardless.

Disappointed? Don't be, this isn't even an official release, and it of course in no way represents whatever changes we'll see in the Consumer Preview. I'll let you know if I find anything else, but it doesn't seem like there will be much here.