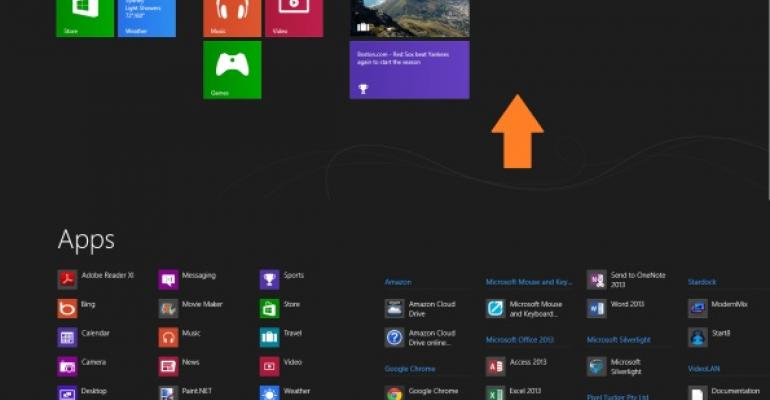 What I’ve Learned from Using “Blue”: All Apps

Last week, I wrote about my observations using a very early build of Windows 8.1 “Blue” on traditional PCs. Since then, I’ve been using the build on more modern PC hardware, including a multi-touch tablet. And as was hinted at by other Blue reports, some features are currently only exposed on such hardware. Here’s one of them.

Check out What I’ve Learned from Dual-Booting "Blue" for my previous look at using this coming Windows 8 revision on traditional PC hardware.

In (Virtual) Hands-On with Windows 8 “Blue” Build 9364, I wrote that the All Apps button in the app bar for the Start screen was missing in action and that there was no obvious way to access the All Apps interface. Turns out you need a touch-based system to see the new way Microsoft is handling this interface. And if you’re familiar with Windows Phone, you’ll immediately understand the inspiration.

Note: This shot is not an actual "Blue" screenshot. My tablet is having some personal issues this morning, related, no doubt, to the pre-release nature of the current Blue builds.

In Windows 8.1 “Blue,” the All Apps screen is reached by sliding the Start screen up, instead of via an app bar button. This is how Windows Phone works; you slide the Start screen off to the left to access the All Apps list. So I happen to like this change, but we should also admit it’s (currently) undiscoverable, beyond a small Start screen bump that occurs when you tap an empty area of the screen. Still, a welcome addition.