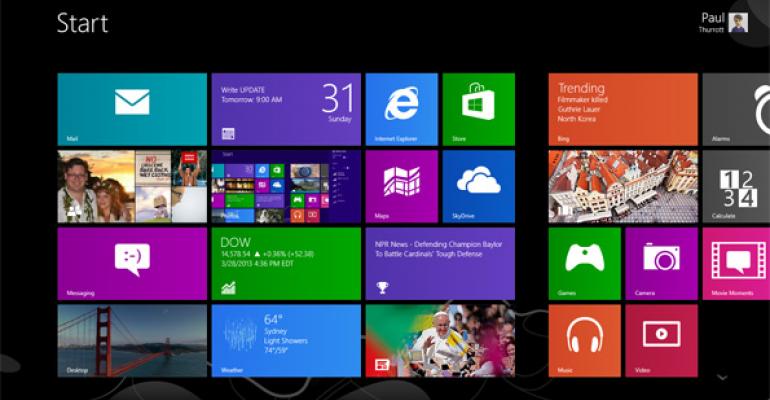 What I’ve Learned from Dual-Booting "Blue"

For the past week, I’ve been running the leaked build of Windows 8 “Blue”—the coming feature pack/service pack (or GA + 1) update to Windows on a variety of real computers. Not surprisingly, the experience is a lot like running vanilla Windows 8 … but with a ton of subtle improvements.

What I haven’t been able to do, alas, is get “Blue” installed on the hardware that would make the most sense: A multi-touch tablet of some kind. Oh, I have plenty of them here, including both Atom “Clover Trail” and Ivy Bridge-based machines. But for a variety of reasons, I haven’t been able to completely upgrade any of them to Blue or do a clean-install or dual-boot with Blue either.

I’ll keep trying of course, though a trip this week is going to temporarily halt those activities. What I have done is gotten Blue installed on more traditional PCs, including my tower desktop PC (in a dual-boot configuration with Windows 8) and on an Ultrabook (in a standalone install).

What I miss in not using Blue on modern hardware is a number of features that don’t expose themselves yet on non-touch hardware, including the Windows Phone-like Slide to Shutdown control on the lock screen and the All Apps view from Start screen. This situation is analogous to the Windows 8 Consumer Preview, where many of the new commands were available from touch but not yet from keyboard and mouse. Those were added in later milestones.

But that hasn’t stopped me from spelunking around Blue. I’ve written a lot about this release over the past week, but looking back at seven full days of use, two things are most striking. And both of these points, tellingly, are about Microsoft doubling-down on the Metro environment.

First, there is a clear move to emphasize Metro over the desktop. If you had any hope that the firm was listening to the increasingly shrill complaints from the desktop crowd and would offer any form of concession at all, there is zero evidence of that in this build. Blue build 9364 is all about Metro or, more concisely, about removing the need to use the desktop as much as was required in the original release of Windows 8. It’s still a hybrid OS, of course, with both Metro and desktop “personalities.” But the desktop personality is being shunted further off to the side. Those who think this won’t continue over subsequent releases are delusional. Think about the command line in Windows over the years. That’s the desktop.

Second, Microsoft is making important changes to Metro to make it a more complete and mature environment. These changes expose themselves in a few different ways, but the poster child for this, I think, is the Start screen, which is gaining additional tile sizes, a virtually unlimited number of background and accent color combinations (compared to just 25 in Windows 8 RTM), and in-line (or “in-context”) customization capabilities that don’t require you to know about and find obtuse PC Settings interfaces in order to make changes to the thing you’re currently using. If these don’t sound like profound changes, all I can say is that they make their Windows 8 equivalents look like a Fisher Price activity center by comparison. That is, it’s a big deal.

Want your desktop in Darth Vader black with a dark gray accent? Now you can do it

There’s been some debate about how Microsoft will deliver Blue to customers and whether they’ll charge for it. I have a few opinions about this, none based on sources at Microsoft, just common sense.

Blue will require an update to the Windows Runtime (WinRT) and the APIs that developers use to make apps that run in the Metro environment. By the time Blue is finalized this summer and ships to users by the fall, Windows 8 will still be less than a year old. For this reason, I don’t think Microsoft can or should charge for Blue. It should be a free update that establishes Blue (rather than Windows 8 RTM) as the new baseline for both users (usability/features) and for developers (API/run-time engine). Doing otherwise would fragment the new Windows 8 market. Microsoft can’t have two Windows 8s.

As for the delivery vehicle, the leaked Blue build is of course the full OS. That is, it’s the stock Windows 8 image (including the stock, RTM-level built-in apps) plus the Blue bit integrated. This is very similar to how new Windows OSes are delivered post-service pack, where you’d see Windows 7 plus SP1 integrated together and installed on new PCs. So I expect new PCs sold this holiday season to include Blue. But I also expect Microsoft to deliver the Blue bits to customers via Windows Update, just like any other update. And as they did with service packs in the past.

There are some new apps bundled with Blue, as you may have seen. None are particularly interesting, yet, and one—Alarms—was hinted at over a year ago when early builds of Windows 8 included this app. We presumed, correctly, that it would look and work a lot like the Alarms app in Windows Phone. It does, with the presentation of course adapted for the silly amounts of screen real estate you get in a tablet or PC.

The other new apps are part of that push away from the desktop that some are still a bit too eager to discount and/or debunk. So pay attention: Calculate, Sound Recorder and Movie Moments are all currently available in desktop alternatives (Calculator, Sound Recorder and Movie Maker, respectively), and their inclusion in Blue is three fewer reasons for users of modern Windows 8/RT devices to ever access the desktop again. That is exactly why they’re included. Still not getting it? I’ll send a wake-up call via Alarms.

Put another way, while I’m among that crowd that would like to see some more improvements to desktop/Metro integration, I understand the direction Microsoft is heading. And let’s be honest for a moment: These changes are both logical and necessary. They’re also appreciated. I can’t wait to learn more.