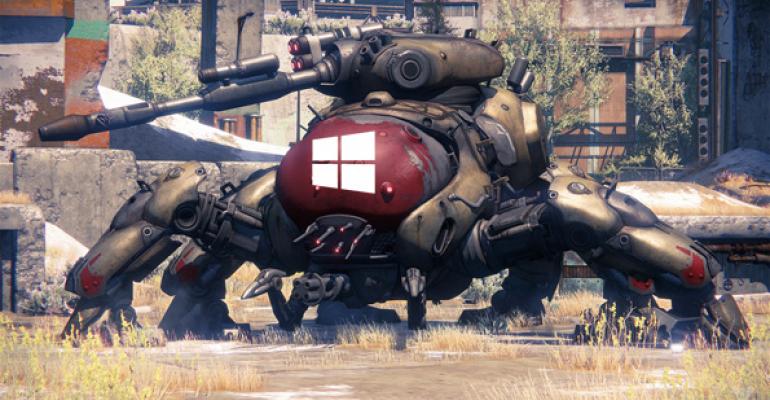 Microsoft tries to put Windows 8 in the rear-view mirror

At the BUILD developer conference in April 2014, Microsoft will discuss its vision for the future of Windows, including a year-off release codenamed "Threshold" that will most likely be called Windows 9. Here's what I know about the next major release of Windows.

As a kind of recap, we know that Microsoft will update Windows 8.1 in 2014, first with a service pack/feature pack-type update called Update 1 (or GDR1 internally). I wrote a bit about this update recently in Windows 8.1 Update 1 (Very Early) Preview but the expectation is that it will ship in April 2014 alongside Windows Phone 8.1, the development of which Microsoft will soon complete.

Also in April, of course, is BUILD 2014. That show will hit just weeks after Microsoft completes its corporate reorganization and will surprisingly be very much focused on Windows Phone and Xbox, according to my sources. But I think Windows watchers will agree that the biggest news from the show will be an announcement about Microsoft's plans for the next major Windows version, codenamed "Threshold."

I previously wrote about Threshold in Microsoft to Take Windows to the "Threshold", Further Changes Coming in Windows "Threshold" and Big Changes Are Coming to Windows. This is the release my sources previously pegged as being the one that will see the return of the Start menu and the ability to run Metro-style apps on the desktop alongside desktop applications.

But Threshold is more important than any specific updates. Windows 8 is tanking harder than Microsoft is comfortable discussing in public, and the latest release, Windows 8.1, which is a substantial and free upgrade with major improvements over the original release, is in use on less than 25 million PCs at the moment. That's a disaster, and Threshold needs to strike a better balance between meeting the needs of over a billion traditional PC users while enticing users to adopt this new Windows on new types of personal computing devices. In short, it needs to be everything that Windows 8 is not.

Here's what I've learned about Threshold.

Windows 9. To distance itself from the Windows 8 debacle, Microsoft is currently planning to drop the Windows 8 name and brand this next release as Windows 9. That could change, but that's the current thinking.

BUILD vision announcement. In case it's not obvious that the Sinofsky era is over, Microsoft will use BUILD to provide its first major "vision" announcement for Windows since, yes, Longhorn in 2003. Don't expect anything that grandiose, but the Windows team believes it needs to hit a happy middle ground between the KGB-style secrecy of the Sinofsky camp and the freewheeling "we can do it all" days that preceded that. As important, the firm understands that customers need something to be excited about.

No bits at BUILD. Microsoft will not be providing developers with an early alpha release of "Threshold" at BUILD, and for a good reason: The product won't even begin development until later that month. Right now, Microsoft is firming up which features it intends to deliver in this release.

Metro 2.0. Maturing and fixing the "Metro" design language used by Windows will be a major focus area of Threshold. It's not clear what changes are coming, but it's safe to assume that a windowed mode that works on the desktop is part of that.

Three milestones. Microsoft expects to deliver three milestone releases of "Threshold" before its final release. It's unclear what these releases will be called (Beta, Release Candidate, etc.) or which if any will be provided to the public.

April 2015 release. Microsoft is currently targeting April 2015 for the release of Windows 9 "Threshold."

In some ways, the most interesting thing about Threshold is how it recasts Windows 8 as the next Vista. It's an acknowledgment that what came before didn't work, and didn't resonate with customers. And though Microsoft will always be able to claim that Windows 9 wouldn't have been possible without the important foundational work they had done first with Windows 8—just as was the case with Windows 7 and Windows Vista—there's no way to sugarcoat this. Windows 8 has set back Microsoft, and Windows, by years, and possibly for good.

These things don't happen in isolation—the big and slow Vista arrived inauspiciously just as netbooks were taking off and Windows 8 arrived just as media tablets changed everything—and it's fair to say that the technology world of today barely resembles that of 2006, creating new challenges for Windows. Threshold will target this new world. It could very well be a make or break release.