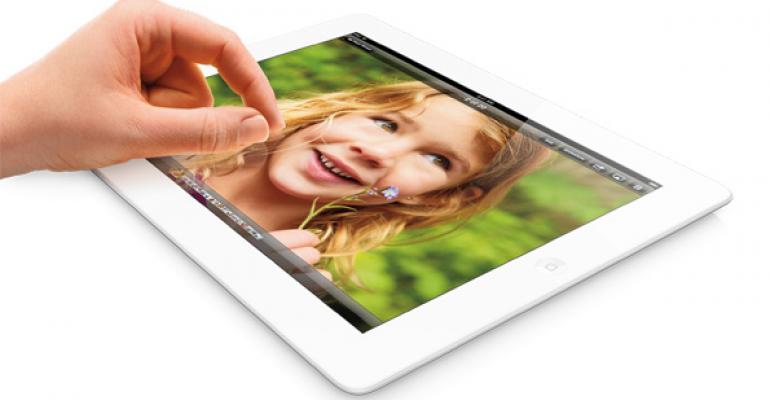 Tech enthusiasts are in an uproar today ... about storage space?

Two interesting and coincidental revelations occurred today. Apple announced painfully expensive 128 GB versions of the iPad, which I’d normally not comment on or care much about. And the blogosphere is up in arms with news that Microsoft’s Surface Pro tablets waste a ton of disk space, with the 64 GB version offering up just 23 GB of usage space. These items are, alas, related.

If you had told me that Apple was going to add a 128 GB version of the iPad—it currently offers 16, 32, and 64 GB versions, which come in a variety of Wi-Fi and Wi-Fi/LTE configurations—I would have assumed that the company would simply eliminate the 16 GB versions and price the others accordingly, with the 32 GB versions occupying the low-end and hitting the entry-level $500 price point.

But that’s not what Apple is doing. Instead, it is retaining the existing configurations, and their price points, and is adding the 128 GB versions to the top of the line, creating new, even more expensive options. A 128 GB iPad with Wi-Fi will cost an astonishing $800, while a version with LTE will cost a budget busting $930. That’s over double the price of the average Windows laptop. (Which is $420).

This blows me away.

But while I dismissed this move with a “classic Apple” comment on Twitter earlier today, I’ll at least say this: If you are truly embracing the post-PC theory and are going to use an iPad as your only “computer,” and are downloading photos from your camera, watching content, creating documents with iWork, and so on … well, maybe 128 GB—and that crazy $800 to $930 point—makes sense to you.

I will say that for Apple: In a down economy, with PC prices (and unit sales) falling, releasing a high-end and even more expensive iPad is either crazy, or crazy like a fox. It’s the type of thing Steve Jobs absolutely would have done, with an imagined middle finger extended towards critics like me who have been complaining that the price of the iPad was already far too high.

(When you consider that one of the imagined success stories of the PC world today is the $249 Chromebook, this is even more astonishing. Apple isn’t just ignoring the low end of the market, they’re doubling down on lunatic pricing. God bless ‘em.)

And then there’s Microsoft.

Next week, Microsoft will unveil its hypetastic Surface Pro tablet, the high-end and PC-compatible version of the mixed Surface with Windows RT tablet it shipped last year. I’m going to be writing tons about this device in the days ahead, but a week before the launch, something odd has happened. Mimicking what happened in the build-up to the release of Surface RT, bloggers have reported that the Surface Pro suspiciously eats up a lot of storage space.

More specifically, the 64 GB version of Surface Pro apparently comes with only 23 GB of free space. 8 GB of that, apparently, is tied to the recovery partition, so if you create a recovery disk, you can delete that and get 31 GB free. But the rest is Windows 8 Pro plus a handful of built-in apps, like Skype and the Office 365 Home Premium trial.

The 128 GB version of Surface Pro, likewise, ships with 83 GB of free space. Again, you can save 8 GB of that by deleting the recovery partition.

Folks, Surface Pro is too expensive too. So is Surface RT, as I’ve argued elsewhere. (That said, Surface RT is far more directly comparable to the iPad, and the pricing is more inline: A 64 GB Surface RT device costs $599, $100 less than the comparable iPad.)

But the other issue is that the iPad suffers from a very strange problem. Its Retina display, at a whopping, bigger-than-HD 2048-by-1536 resolution, is, in my mind, unnecessarily vast. It requires apps to include gigantic graphic resources which have exploded the sizes of apps. It’s kind of a weird thing to say, but the iPad, which in many ways is vastly inferior to a PC, actually requires more storage space because of this app size/screen resolution issue.

Which brings me to why these issues are in fact related.

All the complaints I’ve seen today about the lack of storage on Surface Pro devices involves self-righteous indignation about why or how Microsoft can possible sell a device that so bald-facedly misrepresents the amount of free space it has. But the Surface Pro is just a PC, and in addition to being expandable with micro-SD storage, this situation is well understood. It simply doesn’t need as much storage space, especially if you’ve embraced cloud computing (SkyDrive, Xbox Music, etc.). And anyone who knows enough to be upset about this can delete the recovery partition. Obviously.

But here’s another oddity to this situation. Where iPad is supposedly embracing this “post-PC” world, its apps in fact are bigger, heavier, and more resource intensive than they used to be, necessitating more storage. But I find that I need very little onboard storage on my Windows devices, and that’s true with both Windows RT and Windows 8, with dozens of apps installed. That said, I’d recommend 64 GB for RT and 128 GB for Windows 8. No shame in that.

Not that any of this matters. The real issues here are in fact related, but different than what everyone is complaining about. Apple should have eliminated the 16 GB iPad and pushed the other allotments down the pricing scale. And Microsoft should be pricing each Surface RT and Surface Pro model at least $100 less than they are. All of these devices, iPads and Surface alike, are simply too expensive.