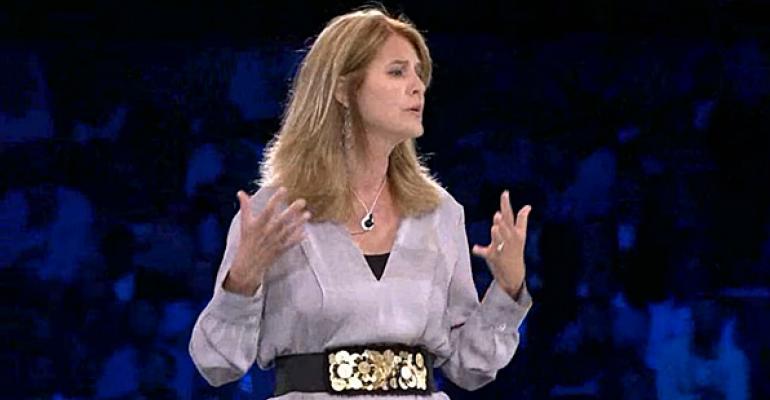 That’s What She Said

Microsoft executive Tami Reller maintains the proverbial stiff upper lip in various interviews this week, but the underlying message is clear enough: Despite public protestations to the contrary, the firm has heard the complaints. And in the coming update, codenamed “Blue,” it’s going to try and do right by those customers who feel alienated by this release.

So what did Tami Reller say about “Blue”?

Reller told the Wall Street Journal that “Microsoft executives will make two sets of relevant disclosures in coming weeks … First up soon will be details about pricing, packaging and an official name.” This suggests something earlier than the expected “Blue” revelation, which I had pegged for TechEd (early June) or BUILD (late June). Instead, “Reller said a second Blue update is expected before late June explaining the technical vision, addressing user gripes about Windows 8, and outlining options for new Windows 8 devices.” So two reveals, one in the next few weeks and one in late June (most likely at BUILD). Interesting.

Reller did not admit that Microsoft was preparing a public preview of Blue, according to Mary Jo Foley, ZD’s Microsoft blogger and my Windows Weekly co-host.

Reller told the WSJ that “people shouldn’t expected the company to discuss its Surface roadmap in coming weeks,” however. I’ve reported previously that Microsoft will issue an 8-inch Surface later this year, and some had expected a reveal in June too.

The updated software will be available later this year in time for the holiday season, Reller told the WSJ.

“Blue” is “both the codename for a coming update to Windows 8 and RT–with additional features and improved services–as well as a name for a broader strategy shift to provide faster changes to its key software than the typical pattern of providing new version once every three years or so,” the Wall Street Journal notes.

I once described “Blue” as “an apology.” Oddly, so does Ms. Reller (basically). “Blue continues the Windows 8 vision,” she told The Next Web. The update will “address customer feedback.”

And yes, they’re paying attention. “All ideas that have percolated through the mainstream press are things that have been considered,” she said, noting that it will also help traditional PC users transition to the new operating system (without explicitly admitting the Start button is making a comeback). “We are being principled, not stubborn,” she told Ms. Foley.

Another example: “We started talking about the desktop as an app,” she told the New York Times. “But in reality, for PC buyers, the desktop is important.”

“Blue also might make it easier to find a set of controls -- known as ‘Charms’ in Windows 8's parlance -- that currently must be pulled out from the right side of a display screen,” Fox reports, something I’d not seen mentioned elsewhere.

What it will cost

Reller refused to discuss pricing with anyone, though she did say that Microsoft would discuss Blue “pricing” at the reveal in a few weeks. If this isn’t free, there will be widespread condemnation.

Retailers like Best Buy are a two-edge sword for Microsoft. On the one hand, they are the primary way for consumers to try and then buy Windows 8 notebooks. But on the other, they have done a poor job of presenting Windows PCs in-store. “Microsoft is spreading the message to retailers that if they want help from Microsoft’s marketing and promotional muscle, they will need to offer more and more variety of touchscreen Windows 8 machines,” the WSJ notes. “Microsoft will put all its weight behind touchscreen devices.”

Reller told the WSJ that by the fall, and certainly by the holiday shopping season, Microsoft expects there will be a wider array of touchscreen Windows 8 PCs at many different screen sizes, types and prices. “Microsoft’s marketing push behind the updated Windows 8 will rival the hundreds of millions of dollars the company spent on TV commercials and other promotions around the fall Windows 8 launch,” the periodical reports.

By the way, when Reller talks up “new device types,” everyone reads that as “8 inch tablets.” But it’s not just tablets. The next Xbox will be based on Windows 8.1 “Blue” too, and I suspect some of the updates in that release are designed for that console. Maybe the Windows 8 reveal really happens at the Xbox reveal this month.

“Reller stated emphatically that Blue is not the end of Windows 8 updates,” TNW reports. Is Red next? Purple? “You shouldn't assume we won't be doing this yearly ... or that we will,” Reller cryptically told Foley.

Here’s an idea: Come clean about your actual plans, Windows team. The transparency stuff is a big deal for your customers. And the rest of Microsoft is doing it. Just a thought.