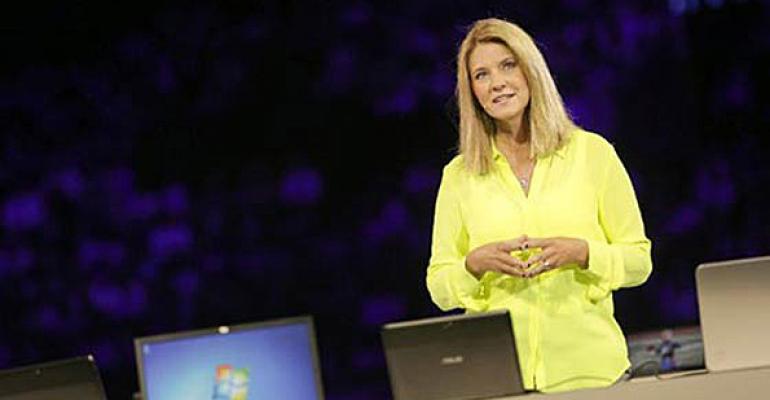 Microsoft’s Tami Reller, who previously confirmed my story about the firm’s internal disappointments about the slow Windows 8 launch, spoke this week about, you guessed it, Windows 8. And in this her newly massaged message, Microsoft is back on board with its partners, rather than blaming them (publicly, at least) for the slow start.

I last wrote about Tami Reller, whose quickly becoming the public face of the Windows team at Microsoft, in Tami Reller Talks Windows 8.

Here’s what she had to say this week.

What Windows 8 means to Microsoft

Reller reiterated a consistent theme, that Windows 8 is Microsoft’s “biggest project since Windows 95.” But she also, for the first time, I think, described Windows 8 as I have, as “the biggest change to Windows” ever. “Windows 8 was a big, ambitious change for us, [and] it was something that we needed to and wanted to take the ecosystem on that journey with us.”

Microsoft has now sold 60 million licenses to Windows 8, which includes every possible type of sale (retail, upgrades, PC bundles, etc.), including sales to PC makers that have not yet been delivered to the public. Reller claims this sales figure means that Windows 8 sales are “roughly in line” with Windows 7 sales.

When asked about Windows 8 sales to businesses, Reller reiterated Microsoft’s belief that Windows 8 and Windows 7 will be deployed alongside each other. Microsoft sees two key scenarios for Windows 8 in business. “Windows 8 apps would be interesting to a corporation and they would be building on the developer platform and, therefore, bring Windows 8 devices into either scenarios or lines of business, or work groups that were going to use a new app,” she said. “And [when] new Windows 8 devices are brought in, [they are] specifically tablets.”

A new view on the launch period

While it is a fact that Windows 8 sale have not met Microsoft’s internal goals and that Windows 8 sales in the real world in Q4 2012 were behind those of Windows 7 in the previous year and in the same time period after that product’s launch, Reller clearly needed to stop burning bridges with the firm’s PC maker partners. So a new, softer (public) view of the launch period is offered.

She also addressed retail demand of Windows 8 during the launch period, which NPD data proves was lackluster at best.

“We all had a strong sense that unique touch devices, particularly touch laptops and tablets, convertibles would be in high demand,” she said. “The level of demand I think surprised a lot of people. And frankly, the supply was too short. I mean, there was more demand than there was supply in the types of devices that our customers had the most demand for.”

The claim here is that Windows 8 sales were lower than expected because PC makers delivered the wrong types of devices. I’ve written a lot about this, of course, but it’s certainly fair to note, as I already have in Explaining Windows 8 PC Sales Over the Holidays and This Best Buy Circular Says It All that there are far too many cheap, non-touch PCs in the market and too-few reasonable priced touch devices. That apparently is changing.

“There was some misalignment between where products were distributed and where there was demand, et cetera,” she continued. “So, there were some adjustments that were made real time. There were some adjustments that are still happening. And, frankly, there's a lot of the tablets that are just coming to market now. I mean, many of the x86 tablets are just coming to market now. Some of the Windows RT tablets did not get the type of distribution that perhaps would have been ideal. And so there's all of those dynamics, which are really important to take into consideration.”

She used this discussion to reveal that the number of Windows 8/RT devices in market jumped from 1000 unique systems at launch to 1700 today, so apparently those latter 700 are the ones customers actually want.

And that’s where things get weird, at least to me.

When you consider that Microsoft is internally agitated with PC makers for botching the launch, you also have to remember that these are companies that Microsoft needs to continue working with. So while Microsoft is also competing with them with Surface, it needs to make a public show of supporting the stuff that its partners produce, even though to date most of it has been junk.

“Collectively as an ecosystem and as an industry we want more and more touch assortment,” she continued. “Like if we say sort of what do we want more of and what does the market want more from us of? It's more touch assortment, and that's certainly tablets, that's certainly convertibles, touch laptops, touch laptops at great prices, all-in-ones, all-in-ones at great prices, I mean all of those are proving to be high demand items. And so that's still a partial to-do for the industry is just to continue to deliver on all of that. But, again, even in this month during this show, you've seen a lot of new devices in the touch category come to market, or at least announced to come soon.”

This is a tortured way of restating the original argument but trying to come off more positive: PC makers did not deliver the right kinds of devices at launch.

Microsoft refuses to comment on Surface sales. But pressed on Surface, Reller did discuss Microsoft’s decision to let retailers sell Surface over a month ahead of the original schedule.

“We made a very explicit decision initially to launch [Surface with Windows RT] into our own stores, so that could have the opportunity to really watch, and watch carefully, and learn, and just get things right,” she said. “We always had it in our plan to then start conversations with retailers about bringing Surface into broader distribution. What we found when we started to have those conversations is they did want to do what retailers don't often do, and that is to get a product onto shelves very, very quickly. And in some cases it was a matter of days. And so we did have the opportunity then to see Surface in a few retailers for a few days of the holiday, which is great. That was helpful to us as we now prepare for the selling seasons to come. So, we were pleased, and I think it's safe to say they were pleased.”

Microsoft plans to deliver Surface in Pro in the waning days of January or early February. Reller noted that this device, unlike Surface RT, is more PC than tablet. “Surface with Windows 8 Pro is a PC that also does an incredible job as a tablet,” she said. “I mean, it's a[n Intel] Core i5, so the performance is terrific. And yet it has so many of the great attributes of Surface, including Touch Cover, Type Cover, Kickstand, all of the great hardware design that we've talked about with Surface. So, we're excited to be able to offer customers, both consumers and business customers, two choices.”

This I like: Reller debunks rumors that Surface exists solely to point PC makers in the right direction.

“We got into this business as a business,” she said. “This isn't a short-term adventure.” Nice.

Microsoft cheerleaders have argued, in this case correctly, that looking at the first few months of Windows 8 sales isn’t necessarily any indication of how things will go long term. And certainly, as new Windows 8 devices hit the market, things could change. Reller believes they will.

“Clearly with a project this ambitious, it's not just one selling season, it will be the product of multiple selling seasons, and more progress to come,” she said.

Windows 8 will continue to evolve

Parsing Reller’s comments for any information about the many updates Microsoft plans to deliver to Windows 8 over the coming year, and possibly about the related feature pack that’s code-named Blue, she did offer up an interesting perspective. “The team is focused on really avoiding distractions and just getting set up to drive things forward,” she said, which I think says a lot about a continued strategy of ignoring feedback and, possibly, not being able to deliver big changes as quickly as hoped. (They’re just getting “set up” now to drive things forward? What were they doing before?) “It's a team that is used to delivering very, very big, complex projects together and in working across Microsoft to bring teams together … They have proven success in delivering projects together … we are moving forward and did move forward fast after the change [in leadership when Steven Sinofsky left].”

“[After] a day of distraction [when Sinofsky abruptly left], people went back to the project that they're working on, which we won't talk about that today.”

Surface Phone and other Surface devices?

While this doesn’t have a thing to do with Windows 8, Reller did shoot down rumors of a Surface Phone or Surface Ultrabook, both of which I called for in Five Surface Devices Microsoft Should Make in 2013.

“We're focused on these two great devices in Surface RT and Surface Pro, and sort of what that brings for us,” she said. “That's our focus.”