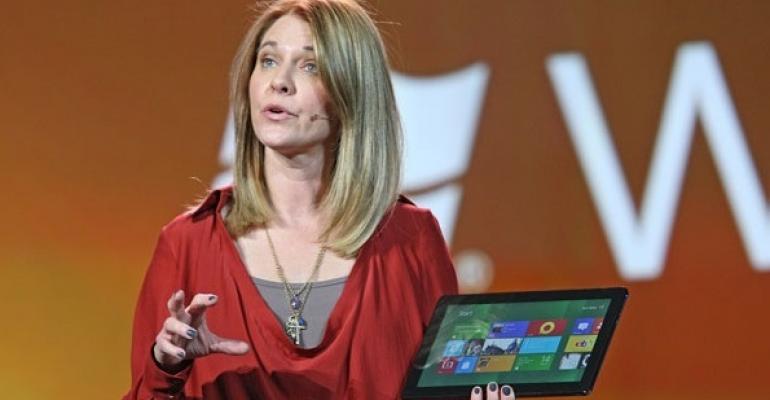 Tami Reller continues to communicate her thoughts on Windows 8, engaging the public in a way that I find to be frank and refreshing

This past week, Microsoft CFO and CMO Tami Reller provided another Windows 8 progress report, this one focusing on the new system’s first 90 days in the market.

I’ll say this about the Windows team, post-Sinofsky: It’s a lot more open, with Reller in particular making herself available in ways that simply never happened in the previous six years. This is a hugely positive sign, I think, and it stands in sharp contrast to the carefully orchestrated “say nothing by saying too much” strategy employed by the previous regime.

Last week, Reller made herself available yet again, this time to a select crowd of tech bloggers and journalists, each of whom published the varyingly insightful results of their interviews. In addition, Microsoft published an official Reller Q & A to the Blogging Windows blog.

Here’s a wrap-up of what we learned.

“More than 60 million licenses sold is on par with the record setting pace we saw with Windows 7,” Reller said in the internal Q & A. “We feel good about our start with Windows 8 – and of course there is still much more to do.”

The Seattle Times’ Janet Tu got an interesting admission from Reller in Windows CFO Tami Reller talks Windows 8, Surface and marketing: Microsoft has spent over $1 billion marketing Windows 8 to consumers. “I feel like it's some of the best marketing that we've done,” Reller told her. “It has given us record awareness of the products. And it's driven real interest … Now, because we have this large level of awareness, we can move to marketing that allows us to even show off the product more.”

Where are all the tablets?

There continue to be questions about the mix of tablets vs. traditional PCs in the market place, but Reller reiterated her previous stance on this issue, that PC makers started off poorly but are getting their acts together. “Partners are working hard to bring stunning innovation to market across a broad spectrum of tablets, convertibles, touch laptops and Ultrabooks, and all-in-one PCs,” she said.

Dina Bass, writing for Bloomberg, reports that Reller says the problems that accompanied the launch have been solved. “Now I feel increasingly good about mapping that interest to having those customers find the device they want on the shelf,” she told Bass. Bloomberg attributed the bad mix of devices at launch to “Chip delays and Microsoft’s restrictions on new hardware.” Reller also told Bass that Microsoft expects that more Windows 8-based tablets will probably be sold compared with those running Windows RT.

“Since the grand opening of the Windows Store on October 26th, the number of apps has more than quadrupled,” she said. “App downloads are strong as we recently passed the 100 million app download mark – just two months after [October 26, 2012]. We have seen double digit growth in people visiting the Windows Store week over week since October.”

I’ve heard from my sources at Microsoft that the Windows team debated for months over how much user training was required for the new and non-intuitive Windows 8 user interfaces. But in the end, all the company did was add the same lame mini training video at the end of Setup that it had made months earlier. Here, again, Reller sticks to the official line, however: That Windows 8 was the most-tested Windows version of all time and that people are figuring it out quickly.

“We had 1.24 billion hours of active usage time from people during our previews,” she said. “By the time we hit [general availability in late October], we had usage in almost every single country, making this the most tested release of Windows ever.”

“People are successfully and quickly learning Windows 8 and their usage gets richer and stronger over time,” she continued. “Fifty percent of users get through the out of box experience in less than 5 minutes. On the very first day, virtually everyone launches an app from the Start screen, finds the desktop, and finds the charms. Almost half of users go to the Windows Store on that first day. After two weeks, the average person doubles the number of tiles on Start.”

Users are eager for information about “Blue,” the supposed codename for the interim update to Windows 8. Perhaps they’re being a bit too hopeful. Reller casually throws out a reference to “ongoing updates to the OS,” but nothing of substance. “We’re only just getting started,” she adds, a phrase that is oft-repeated at Microsoft, and was repeated in virtually every single blogger post verbatim. (That this phrase has its origins in the PDC 2003 introduction to Longhorn should trouble anyone reading this.) At some point, Microsoft needs to move past “getting started” and start doing something to fix Windows 8.

Geekwire’s Todd Bishop also tackled this question in Q&A: Windows business chief calls Windows 8 launch a solid start, but just a start. Reller told Bishop, “Here’s what I can say. If we look at the last 90 days, the pace of change, and the pace of evolution and improvement is very fast, and I think that’s a good reflection of how we think about how fast and fluid we want to move forward. Just look at what we’ve been able to accomplish.”

My Windows Weekly co-host Mary Jo Foley asked Reller whether Microsoft planned to attack the popular 7-inch tablet market with a new, smaller Surface version. According to her report, Microsoft's Windows 8: Coming to a smaller screen size near you?, Microsoft is now considering such a thing. And that’s a big deal, since the answer to this question just a few short months ago was “no way.”

The Seattle Times also asked about a smaller Surface. “Windows 8 gives us such an opportunity to bring this experience to form factors that are interesting,” Reller answered.

Fixing the barely functional apps that are bundled with Windows 8

Mary Jo was also the only one to drag a startling admission out of Reller: That the built-in apps in Windows 8—like Mail, People, Calendar, and Xbox Music—“need work” and not just a few minor updates. They will be updated, Reller told her, and “in a significant way,” though no time-table was provided. “It was encouraging to hear that Microsoft is committed to making these ‘first-party’/built-in apps best-of-breed,” Foley writes. “Happily, the team isn’t pretending these apps are good enough.”

Windows 8 in the enterprise

The Next Web’s Alex Wilhelm added a bit about Windows 8 acceptance in the enterprise in his post, In Conversation with Microsoft’s Tami Reller: Inside the soul of Windows 8. While many believe Windows 8 will fall flat with businesses, Wilhelm correctly notes that Windows 8 (and RT) are a better fit than Windows 7 for the current bring-your-own-device (BYOD) trend. “Companies can introduce the new operating system alongside its predecessor with limited disruption, enjoying the better parts of it without incurring fresh headache,” he writes.

Microsoft has not provided any indication at all regarding Surface sales. Wilhelm was able to pull the following quote from Reller, however: Surface sales were “good,” she claimed. There you go.

But Janet Tu, from the Seattle Times, got Reller to state that Microsoft would eventually come clean on Surface sales. “There will come a time when we'll say more,” she admitted.

Is Surface too expensive?

I’ve often claimed that Surface is too expensive. But Reller claims each model is priced appropriately.