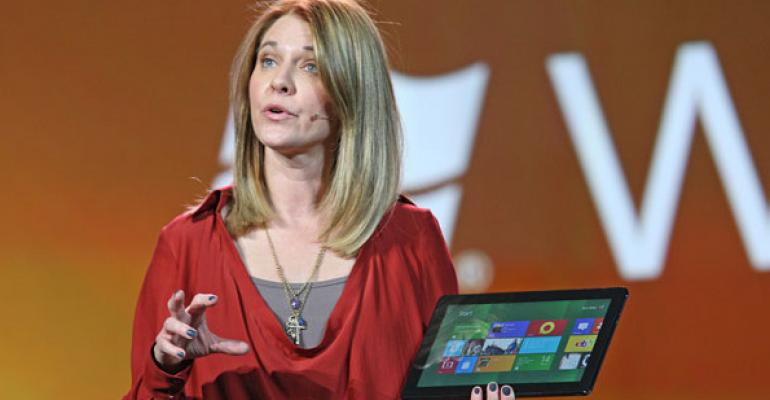 One of Sinofsky's replacements sounds off on Windows 8

When Steven Sinofsky left Microsoft, most of his day-to-day responsibilities were split between Julie Larson Green and Tami Reller. This week, Reller spoke at a Credit Suisse Annual Tech Conference, where she of course spoke about Windows 8. But Reller actually confirmed my reports about internal dissatisfaction with PC makers, among other interesting tidbits.

(Thanks to my Windows Weekly co-host Mary Jo Foley for linking to the transcript of this speech.)

This was of course the speech in which Reller revealed that Microsoft has sold 40 million Windows 8 licenses, though there seems to be some disagreement about whether that’s a good number. My take is this: 40 million is twice the normal number of Windows licenses that Microsoft sells in one month. I’d have expected more than double the sales in the launch month, to be honest.

Anyway, back to Reller. Here are a few interesting tidbits from her talk this week.

“I'm going to talk to you about our new release, and really the tremendous buzz and interest we've seen in the marketplace since October 26th when we officially launched,” she said. “We have sold 40 million Windows 8 licenses so far … The 40 million [license sales] is roughly in line with Windows 7.”

I’ve exclusively reported that Microsoft blames PC makers for Windows 8’s slow start. (Read more in Windows 8 Sales Well Below Projections, Plenty of Blame to Go Around and Dialing Back the Crazy on Windows 8.) She actually corroborates that information.

“It will take a few selling seasons to get sort of all the designs we all like into the marketplace,” she said. “If you go into retail today, you will see some great touch devices, whether it's touch laptops, or whether it's a tablet or two with Windows 8 or Windows RT. It's not enough in our opinion. I mean, we think the pipeline is great, and we're excited to see that pipeline come into retail. And they are coming. And so our OEMs are doing great work, and we'll see that come in over the next several months. Some you'll see in December, some it will take longer. But I think it's good, but not great in terms of the full touch assortment.”

Why it was designed the way it was

If there’s a single conversation about Windows 8 that exemplifies this release, it has to be the weirdness of the dual interfaces, Metro and desktop. Reller doesn’t ever directly address that exact issue, but she does discuss, in broader terms, why Windows 8 is the way it is.

“In order to deliver experiences relevant to … this world that we now live, and to anticipate that ways that we'll want to use technology in the future, we did need to reimagine the Windows experience from the chipset to a whole new array of form factors, to touch, to the developer platform, the store, and apps, and to the user experience,” she said. “It was built for the future, not just any one single selling season … This idea of work and play, they're intertwined, and hopefully intertwined seamlessly as you move between them.”

“PCs have become increasingly mobile and much more powerful, and with Windows 8 and the new form factors we're introducing it's all about moving effortlessly between what you want to do, call that create and consume, and about what you need to do, all in one device, whatever device you happen to be on,” she added. “We talk about this as no compromise, and that's whether you're on a device with a mouse and keyboard or whether you're on a device with touch.”

“That desktop PC of old has been replaced by one or more, more sleek, more powerful, more mobile PCs with vastly more storage and computing at a fraction of the price.”

I’ve made this assertion as well: That Windows 8 is basically Windows 7++. But many people overlook the benefits over Windows 7 because they’re so freaked by Windows 8’s design.

One thing Reller really messes up is Windows RT. She never mentions, describes or explains it, but then she just says, “also on the RT side…” as if the audience would understand what that even means. There are further references to RT, but no real explanation. This is a blind spot for Microsoft, I believe.

As expected, “Surface with the Windows 8 Pro will be available in January.”

While everyone was likely hoping for some hint of why Sinofsky left Microsoft, Tami circled the wagons, which is to be expected.

“I will miss Steven,” she said. “I will miss working with him on a daily basis. And one of his strong philosophies is that any organization and any system that has to deliver something as big as Windows absolutely needs to be able to live past any one leader, or really any one small set of leaders. And so that philosophy is really part of the DNA of the organization. And we have the benefit of such a strong leadership team and oftentimes in Windows you really only get to see a few visible senior leaders, but the reality is, not only are those senior leaders very strong, but the bench of senior leaders that represent the product holistically.”

“So, this is a team that was able to really come together, even long before Windows 7 started the planning phase, and shipped Windows 7 together. This is the team that then planned Windows 8 and delivered Windows 8 and then obviously has had time to set up for the future. So, the team and the leadership team, but the team holistically, is in great, great shape. And the product is in great shape. And so I think transitions are always somewhat of a challenge, but I think that timing-wise it's a reasonable time and the team is busy.”

Larson-Green is sort of an enigma outside the Windows team, and while I don’t know her, I’ve not been too happy with what I’ve heard. Reller was however quite complimentary.

“Julie has such an ability to not only set a vision for the product, but just to be able to carry on the collaboration that really was such a key part of Windows 8,” she said. “I mean, think about Windows 8 and what we were able to bring together from assets across the company, whether it was the work that we did in Office to make that a key part of the Windows RT value proposition, whether it was Xbox and just how integrated that is. And the concept of being able to have the Xbox service just fully integrated in, whether it's music or video into the Windows 8 experience, Xbox Smart Glass if you haven't checked that out that's a great app. And Bing, I can go on and on. There is so much we were able to accomplish, and we just see the possibility that that presents to consumers, and we just want to keep that going, and Julie and the team will be able to do that.”

That bit is crazy: Windows is the antithesis of collaborative, as anyone in Microsoft will tell you. I suspect this was a direct response to exterior suspicions that Sinofsky was bounced because of his reluctance to collaborate with others, and can thus be considered damage control.

Good stuff. Check out the transcript for more information.