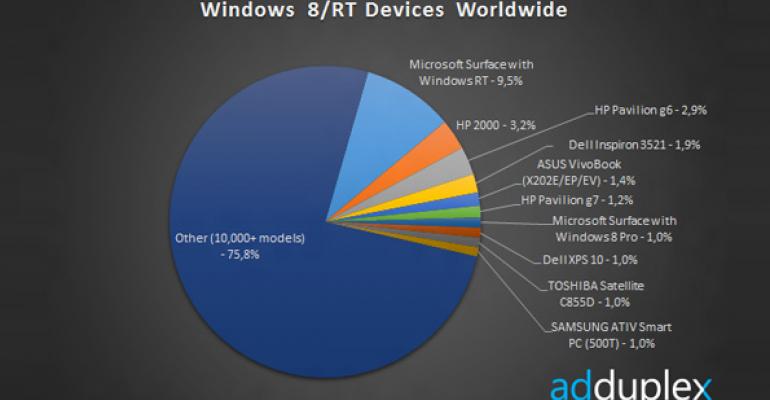 Not quite the disaster we thought it was?

Alan Mendelevich has an interesting post on the AdDuplex Blog that examines Windows 8 device stats. According to his firm's data, Surface RT represents 9.5 percent of all Windows 8 devices used worldwide, while Surface Pro is just 1 percent. But the big news, perhaps, is a hint about coming Surface 2 models and that rumored Nokia tablet running Windows RT.

You may recall that I rely on AdDuplex to provide usage data about Windows Phone. This data measures which device types are most used within a certain device range, so it's "usage" not "market share," which is sales.

Measuring Windows 8 is a bit more complex. In this case, we're looking specifically at which Windows 8 devices are most often used. But these numbers pertain only to "Windows 8 devices" and not "all Windows devices and PCs." And as he noted, because the "stats are based on Windows Store apps, they are definitely skewed in favor of Windows RT, tablets and other touch devices."

The top five Windows 8 devices (by usage) are:

You can see Microsoft's impact on this market in the manufacturer measurement too. Here, Microsoft has jumped from 6th place in April to 3rd place this month. The top five hardware makers are HP (21.2 percent), Dell (11.7 percent), Microsoft (10.5 percent), ASUS (9.7 percent) and Acer (9.4 percent). Lenovo, which is actually the world's biggest maker of PCs (by sales), is in 6th place, with 7.5 percent usage.

The most interesting bits here, of course, regard future devices.

AdDuplex is seeing two new Surface devices in testing, the Microsoft Corporation Surface 2, which is the Surface RT replacement and will simply be called Surface 2, and the Microsoft Corporation Surface with Windows 8.1 Pro, which will be called Surface Pro 2. It is also seeing a series of Nokia tablets (RX-107, RX-108) and so on, which are all variants of the same Windows RT-based tablet, codenamed Sirius. This is a 10.1-inch 1080p device that the smart phone maker is expected to launch next month.